All Comments
Some people eat, sleep and chew gum, I do genealogy and write...

FamilySearch GEDCOM 7.0 in-person event at the FamilySearch Library during RootsTech 2023 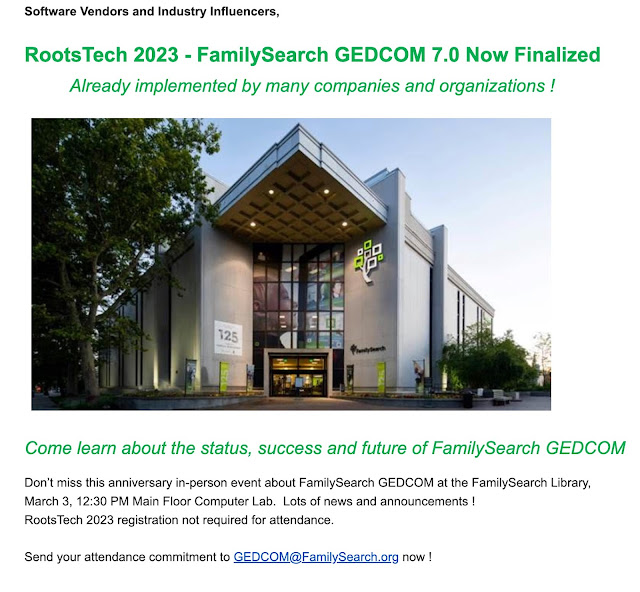 Send your attendance commitment to GEDCOM@FamilySearch.org now !
Posted by James Tanner at 12:53 PM No comments:

You are invited to attend my live class at RootsTech 2023 at the Salt Palace in Salt Lake City, Utah, March 2, at 9:30 am. "Understanding and Researching the Records of the Great Northward Migration 1915-1970" The class will be held in Room 155 B.

I also have six supplementary classes online. "Understanding and Researching the Records of the Great Northward Migration 1915-1970 - Series." These will be available when the conference begins.

You can register for the Live conference for $98 and the online, virtual conference is free. See the following;
Hope to see you there.
Posted by James Tanner at 4:25 PM No comments:

Genealogists circle the law without understanding it 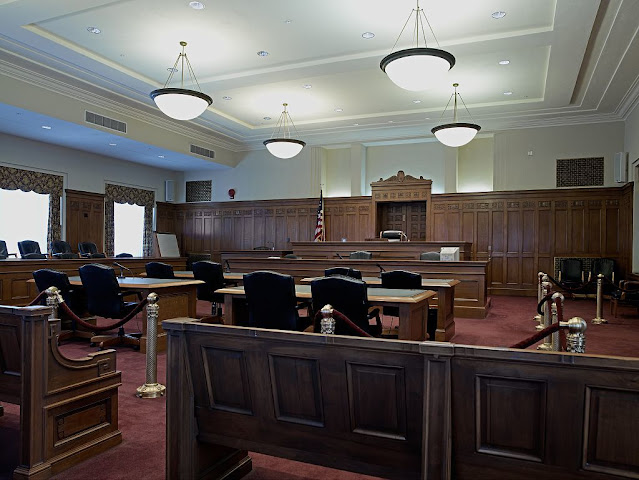 Legal records of all kinds are often listed as genealogically valuable but without a significant effort to learn the language used by legal practitioners, such as lawyers, judges, and court personnel: genealogists find it difficult to use these valuable legal resources.

One of the comments made about attending law school in the United States is that you go to school for three years to learn how to make a noise like a lawyer. Part of this statement is generally true. One of my early experiences after being admitted to law school revolved around the fact that I started to work as a reference librarian in the law school library three months before classes started. During the first few days as the semester began, I worked at the reference desk and had a clear view of the stack of reference books that included the law dictionaries. As each hour's class ended, there was a stampede of students into the library to grab the dictionaries to try and understand what the law professors had just said in class. I had a good laugh. I grew up in a home where my father was an attorney and I ended up in a Boy Scout sponsored legal Explorer Post. With additional trips to court with my father, I thought I knew more than most of the students.

The idea that I knew something more than anyone around me soon evaporated in the overload of unfamiliar legal terms. I learned to live with one important book: Black's Law Dictionary. Here is a link to an online version of that extremely valuable book.

Reading a legal document, at first, is exactly like trying to read something in a language you do not speak such a German to an English speaker. Learning all the vocabulary can be overwhelming. But in addition to the vocabulary itself, there are concepts that are utterly foreign to those who do not speak the language. Now we fast forward almost 40 years and guess what? I still have a copy of Black's Law Dictionary sitting on my desk or behind my desk within arm's reach.

Now, what about the genealogist who has no legal training? What can they do to acquire the language and the concepts that allow them to understand historical legal documents that may also be handwritten and even more difficult to decipher? They can do what those first-year law students did. Run, not walk, to the law dictionaries and start learning this, to them, foreign language.

Today, besides the specific legal language websites, we have Google. I can now take a legal term such as "assumpsit" and type "define assumpsit" and almost instantly get an answer, which is, by the way, as follows:

Assumpsit, or more fully, action in assumpsit, was a form of action at common law used to enforce what are now called obligations arising in tort and contract; and in some common law jurisdictions, unjust enrichment.

Of course, this definition will lead you to define some of the other terms also, such as "common law, tort, contract, and unjust enrichment." Do you have to become an attorney to understand the language? Only if you want to represent people in court. Genealogists need to learn the terms used in historical, genealogically valuable documents which include legal documents. If you do not understand what is written in a will, for example, don't guess at what it says. Either take the time to learn or ask for help from someone who can help.

Genealogy is not simple. It is not easy. It is not something everyone can do in five minutes. Keep learning and don't give up. It is worth the effort.

Posted by James Tanner at 6:30 PM No comments:

One Free Pass to RootsTech 2023 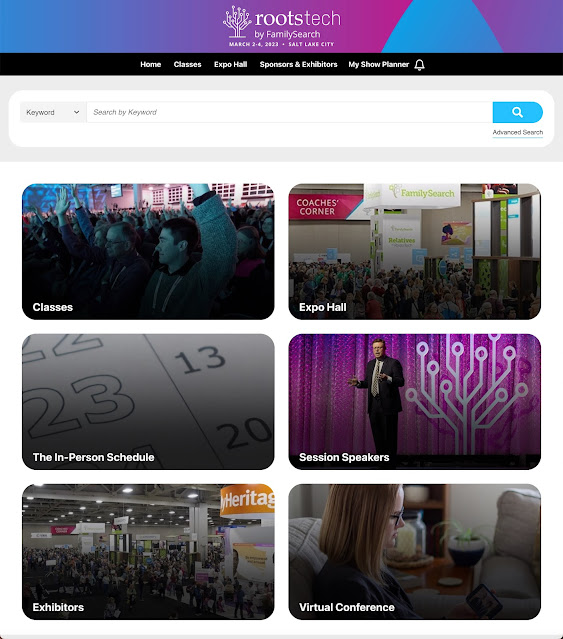 I can give away one complimentary IN-PERSON RootsTech 2023 3-day pass ($98 value) to RootsTech 2023 at the Salt Palace in downtown Salt Lake City, Utah March 2nd through the 4th. If you send me an email at genealogyarizona at gmail.com, I will pick a winner out a hat from any emails I might receive. All entries must be received before 12:00 pm on January 31, 2023 to qualify as an entry. Thanks for coming to RootsTech 2023 if you win and be sure an look me up. Also, please do not enter if you are not coming IN PERSON to RootsTech this year. Thanks.

Posted by James Tanner at 4:08 PM No comments: 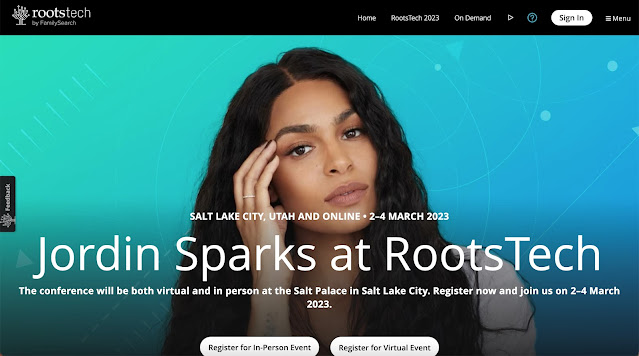 This year's conference will be held from March 2nd to the 4th at the Salt Palace in Salt Lake City, Utah and online. You can register by going to the RootsTech 2023 website at https://www.familysearch.org/rootstech/ 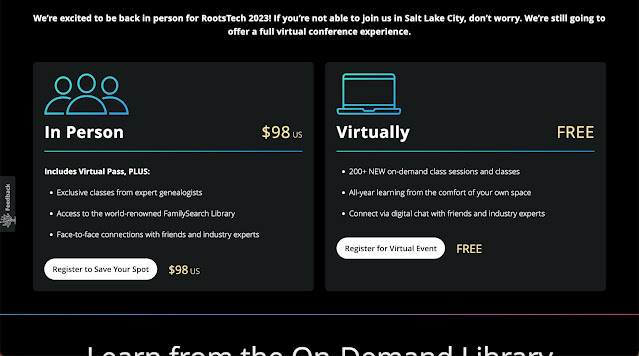 We have had some considerable discussion about what we can expect with the live, in-person part of the conference after a two year hiatus. The discussion centers mostly about how many people will attend in person when the conference will also be broadcast. Most of the live classes will not be broadcast and in addition, those who attend online will not be participating in the Exhibit Hall and will likely miss the unique offers that are usually made at the conference. Personally, I am looking forward to seeing a few people I have missed seeing for the past two years or so. I will be teaching a live class and will also have six online videos. I will also be presenting at the MyHeritage booth all three days of the conference. In addition, I will be in attendance at the GEDCOM events and probably a few other activities that have yet to be announced or determined. You can also look for me at The Family History Guide booth and the Ambassador area in the Exhibit Hall. I think this is the first RootsTech conference where I will be a speaker, an exhibitor, and an ambassador.

Hope to see you there.

Posted by James Tanner at 8:50 AM No comments:

Years ago, when we lived in Mesa, Arizona, I worked at the Mesa FamilySearch Library. Yes, the library was "branded" as a FamilySearch Library. It no longer exists. It was closed down completely when reconstruction started on the Mesa, Arizona Temple of The Church of Jesus Christ of Latter-day Saints. There have been discussions and rumors for a long time that Family History Centers would become FamilySearch Centers. Well, the official announcement of the change finally came in a letter and email dated January 10, 2023. Quoting from the letter announcement:

If you look closely at the photo above from the WikiMedia Commons dated 2 May 2020, you will see that FamilySearch is prominently displayed on the front of the building so changing the name shouldn't be much of a surprise. What will take a lot of time is converting all the over 5000 local family history centers to FamilySearch Centers.

Additional information online from the FamilySearch Newsroom states the following:

This makes sense since they are called "FamilySearch Affiliate Libraries" already. For most of us, the change has been known and a long time coming.

Posted by James Tanner at 7:12 AM No comments:

We are delighted to announce sensationally good news: MyHeritage just published a huge new collection covering immigration to Israel from 1919 onwards, with 1.7 million records! And the best news is that we’ve made it completely FREE! This collection is the Israeli equivalent of the famous “Ellis Island” immigration database for the United States. This is probably the biggest news in Israeli genealogy in the last decade! For a period of more than a year, MyHeritage painstakingly indexed thousands of public domain images made available by the Israel State Archives that include all surviving records of all those who immigrated to Israel by ships and by planes from all over the world starting in 1919. MyHeritage is the first organization to create a searchable index for this valuable collection and associate it with the scanned images. The collection is available for all to search and view for FREE, without even having to sign up, making the information more accessible than ever before for anyone researching their Jewish roots in Israel. Almost every genealogist in Israel is expected to find direct ancestors and other relatives in this valuable collection and to know for the first time the precise circumstances of their arrival to Israel.

There is a lot more information about this collection in the blog article linked above. It looks like MyHeritage.com is off to a great start adding to the over 2.5 billion records they added in 2022.

Posted by James Tanner at 2:23 PM No comments: