Genealogical resources of the National Archives of Ireland 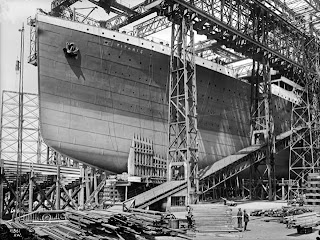 The National Archives of Ireland holds a wide variety of records relevant to Irish genealogy. Foremost among the records becoming available is the entire 1911 Irish Census including all counties now available online. In addition, the 1901 Census material will be made available during 2010 with all data transcribed. For a detailed description of the project, click here. The Census site also contains a very interesting presentation of photographs depicting Ireland in 1911. The picture above is from the Ulster Museum and shows the Titanic in the final stages of construction in May of 1911.

Contrary to the trend in England charging for record copies, the Irish records are being made free online. In addition to the Census records, the Website has an extensive online index of other government databases which include government departments, agencies and other national records. There is a combined search for all the databases. Members of the public can also use their in-house Genealogy Service which offers a free, short personal consultation service by professional genealogists to visitors to the National Archives who are researching their family tree.

In addition to the Census returns, the Archives also has the Primary Valuation records (also known as Griffith's Valuation) for people living in the 1840s, 1850s and 1860s. For earlier records, the Tithe Applotment Books are also available for people living in the 1820s or 1830s. However, an online source for these records has yet to be compiled. A CD-ROM index to the Tithe Applotment books for counties Antrim, Armagh, Derry, Down, Fermanagh and Tyrone is available as Tithe Applotment Books, 1823-1838 while a CD-ROM index to the Primary Valuation is available as Index to Griffith’s Valuation of Ireland, 1848-1864 (both from Genealogical Publishing Co Ltd, Baltimore, USA).

The Archives holds many other records including the following:
Of great value to finding locations within Ireland is the Ordnance Survey digital map of Ireland for putting the NAI's record collections in their geographical context. With the exception of the Ireland-Australia transportation database (1791–1853), the records themselves are not searchable on the Archive site and must be consulted in person in National Archive Reading Room.
Posted by James Tanner at 6:54 AM