The last update to New FamilySearch was dated back in February, 2011. Now, almost six months later, within the past few days, another update was finally announced dated as of June, 2011. The changes deal mainly with further developments in the so-called dispute process. Previously, if you felt that information in the program was inaccurate or inappropriate, you could mark the entry with a dispute. The results were that the entry was marked with a circle with a slash through it. Also, once there was a dispute, no one could change the information. In the last update, new disputes were eliminated but the entry still appeared in the database. That is, the dispute symbols were still there.

FamilySearch implemented a Discussion area for each individual, where you could record any conflicting information.  Here is a screen shot showing the location of the Discussion link: 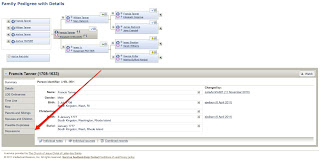 As an aside, I have put in some discussion topics on various individuals since the concept was introduced and have yet to have a response. Not much of a "discussion." But anyway, the newest update to New FamilySearch has moved all of the previous disputes to the Discussions. The announcement says:

This change was anticipated a number of months ago and is not a surprise. The old disputes will appear in a section called legacy disputes. Presently, when you go into the program, there is nothing telling you that there may be either a discussion or a legacy dispute for any given individual which may be one reason why I have never gotten a response to my discussion entries.
Posted by James Tanner at 11:16 AM