What do Search Trends Tell Us About Genealogy?

Google has a product called "Trends." Search trends show the relative interest in any search term over time. In the short term, such trends have been used to spot the outbreak of disease, such as flu epidemics. The idea here is that what people search for on Google is a measure of the interest they have in the subject. As an example, here is a screenshot of the Google Search Trends on the term "World Cup." 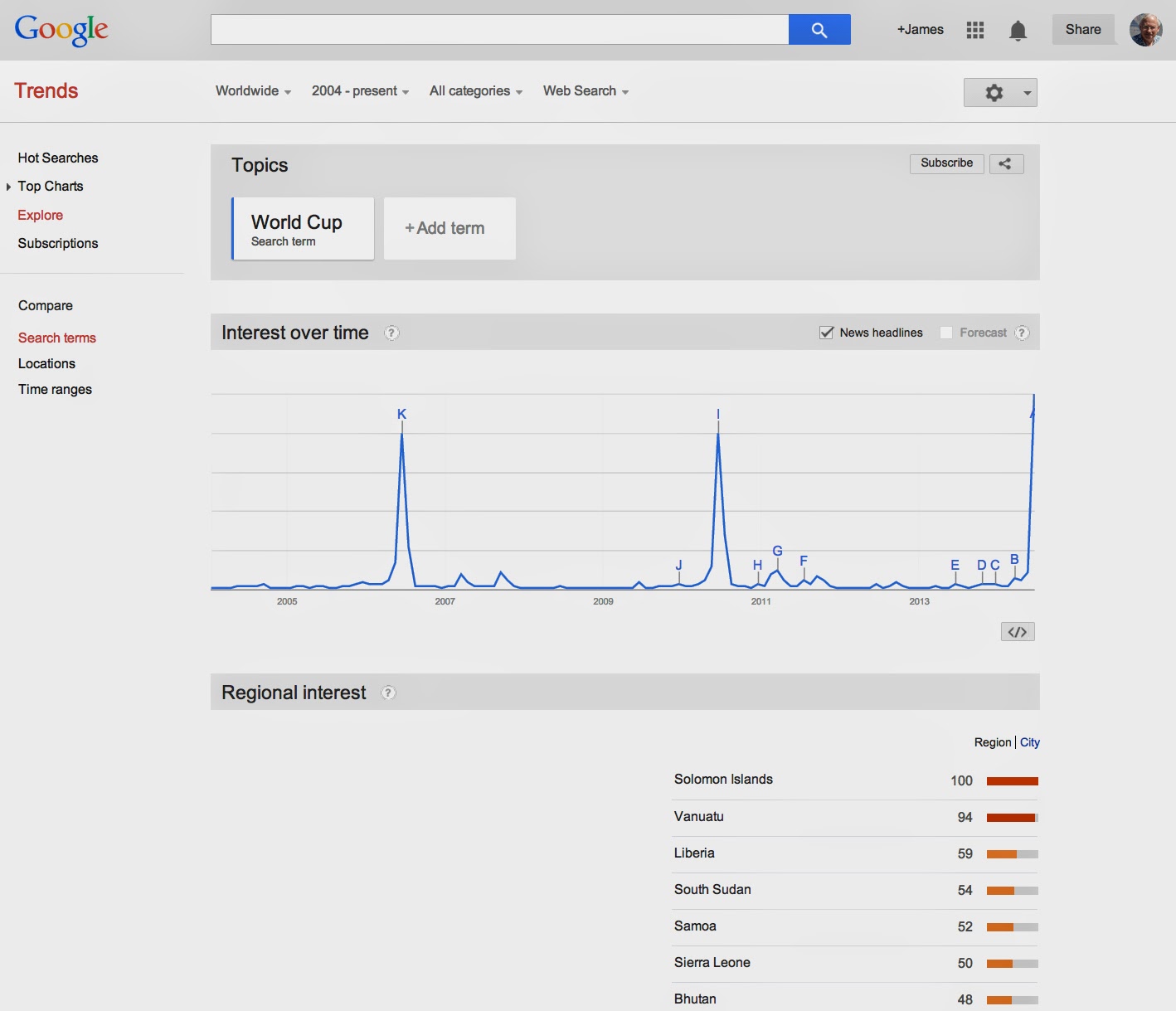 It may seem trivial and obvious, but the search terms peak every four years when the World Cup Football Championships are held. I have talked about this in previous blog posts some time ago, but thought an update was in order. Google correlates peaks in searches to specific news stories. Here is another generic example using the search term, "presidential election." 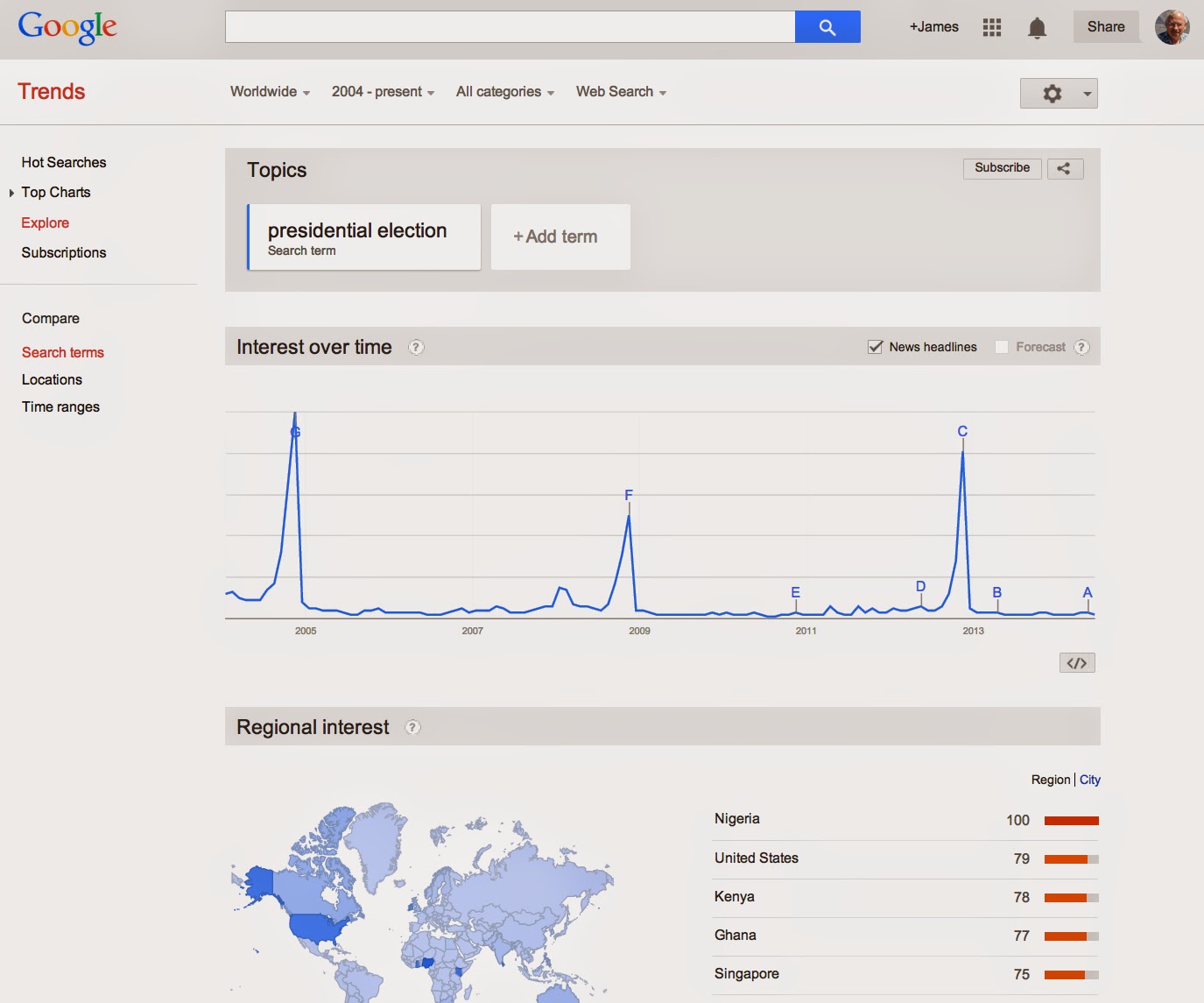 Of course, Google searches reflect global interest in a specific topic, but it is still interesting to see the spike in interest corresponding to the periodic nature of the elections. But what about terms relating to genealogy? Here is a comparison search for the terms "genealogy" and "family history." 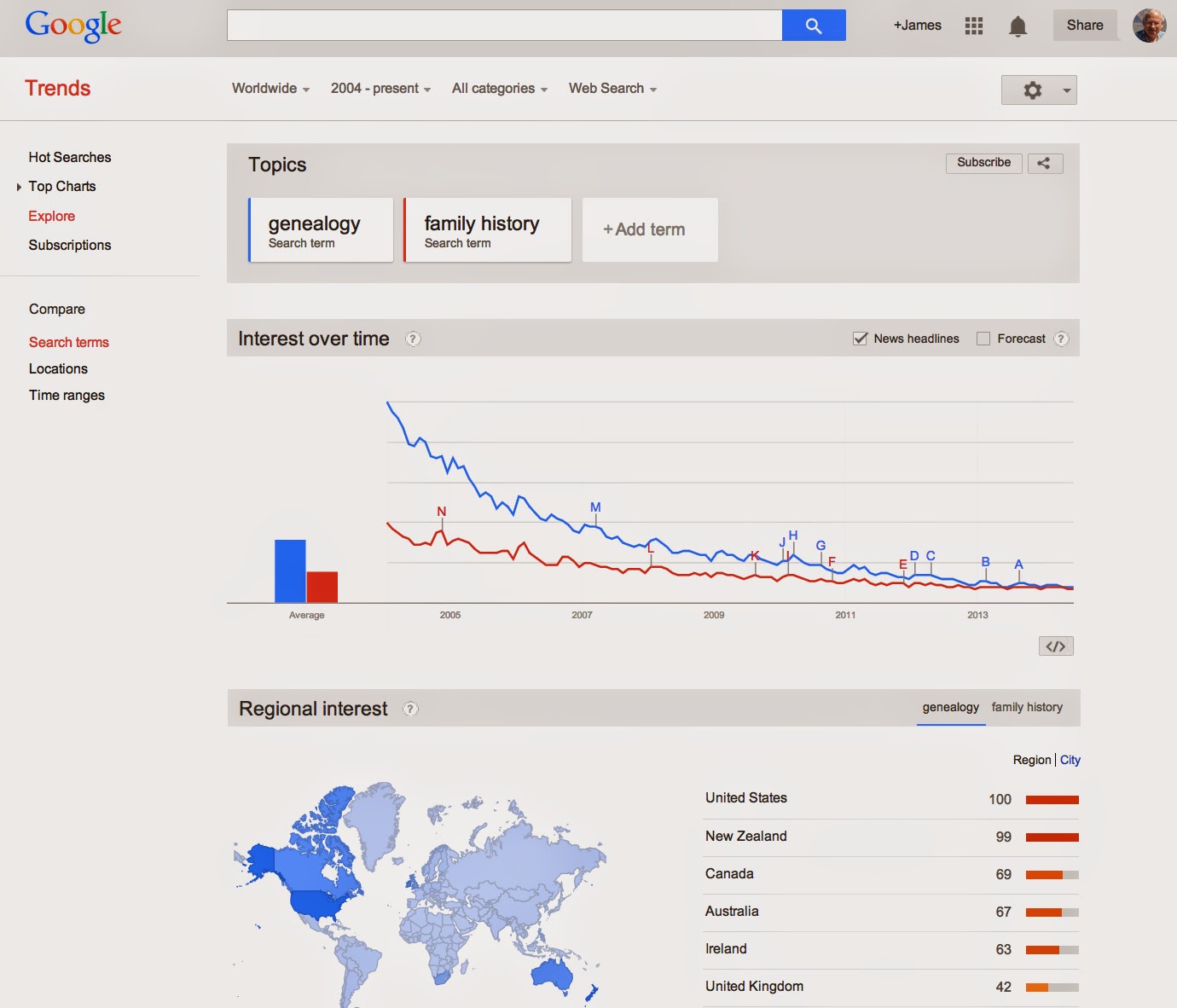 First off, this does not mean that there has been an overall decline in interest in genealogy. This graph show a relative interest based on all online Google searches. What it does mean is that there is more and more "noise" online. That is, there are more and more searches and any one topic, such as genealogy gets a smaller piece of the overall attention of the people in the world. Let's look at the trends for the big genealogy companies, Ancestry.com, FamilySearch.org, MyHeritage.com and findmypast.com. bear in mind the the word "ancestry" can be the basis for searches in lots of different contexts. 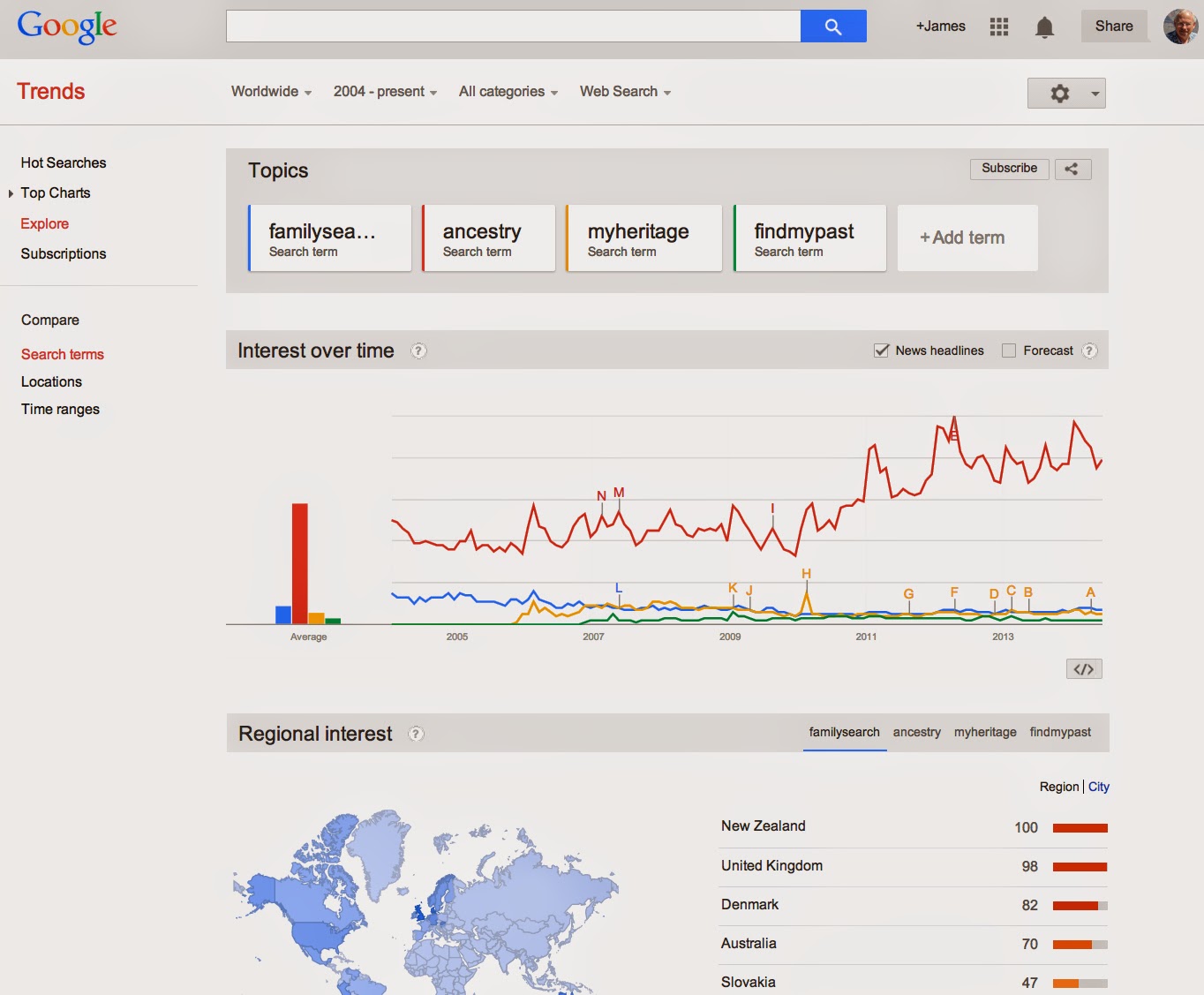 The waypoints on the red Ancestry search really do correspond to Ancestry.com. It looks like the search term "ancestry" is a hot topic and getting more popular. Let's take ancestry out of the picture and see what happens with the other three: 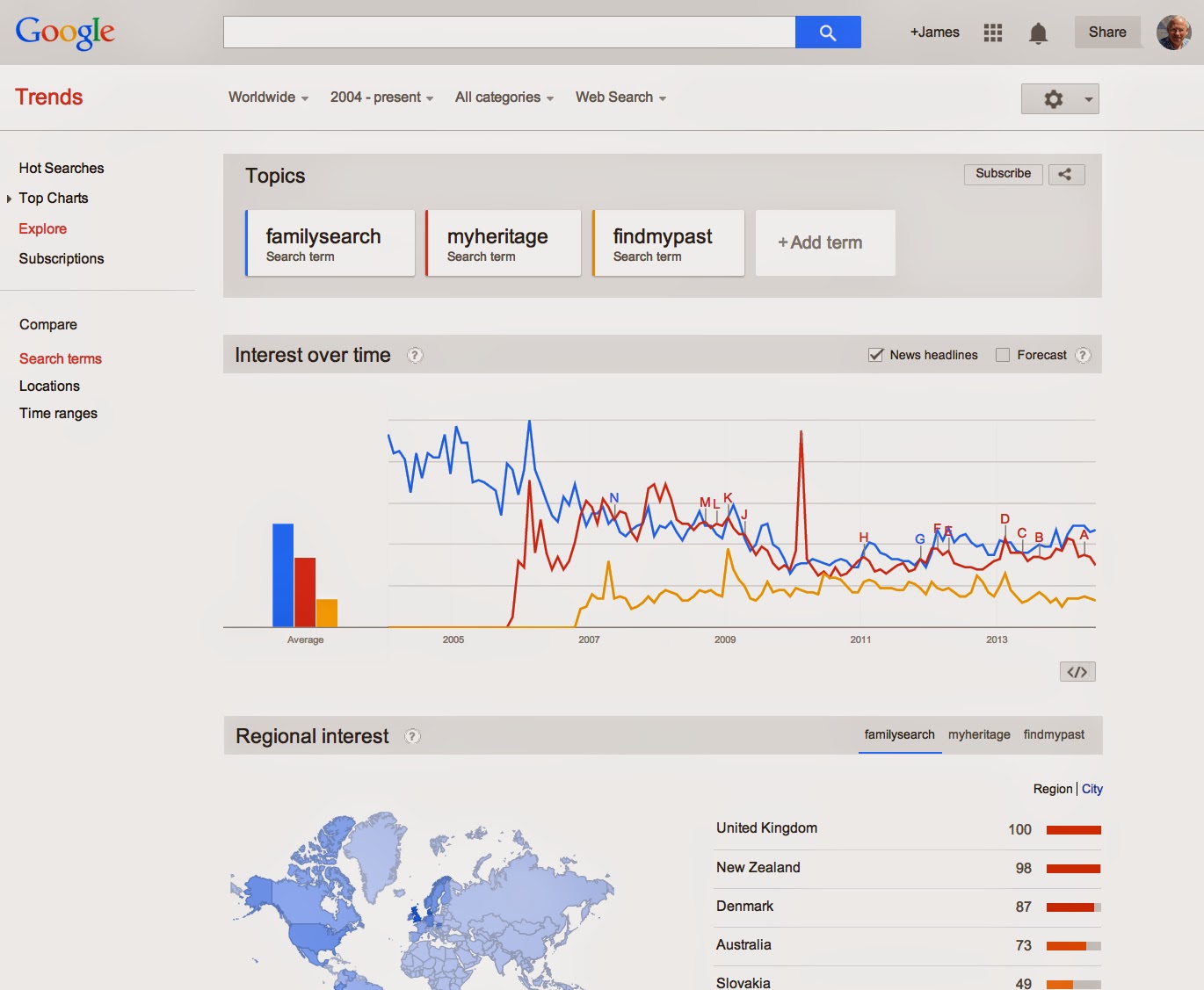 Now this starts to get real interesting. You can see the steep upward curve of MyHeritage beginning when they started the company. You can also see a big peak in MyHeritage in February, 2010 corresponding to what? The huge British genealogy conference, Who Do You Think You Are? held on the 26th through the 28th of February, 2010.  FamilySearch shows a dramatic downward trend through 2010 with a slow upward trend since that time.

What if I use the search terms "Ancestry.com" and "FamilySearch.org?" Here is the results of that search: 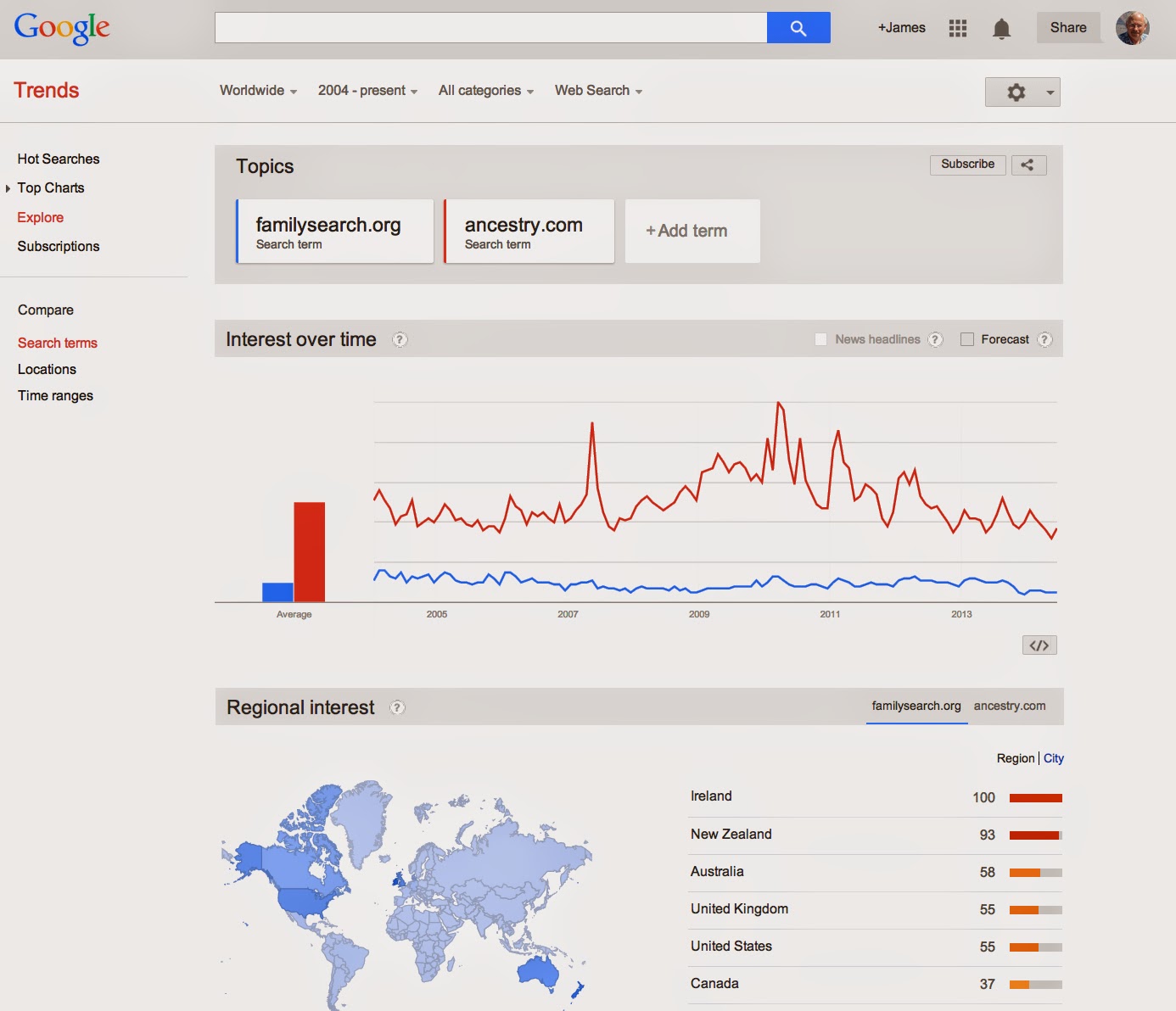 This is very interesting. It shows that a substantial part of the searches on the term "ancestry" alone might have related to other subjects rather than Ancestry.com. It also shows that Ancestry.com has done a really good job of keeping its name before the public.

It is pretty difficult to come up with genealogy related terms that relate only to genealogy. Any generic terms such as "family" and "history" alone, will include a huge number of searches that have nothing to do with "family history" or genealogy. Many of the terms I cam up with did not show enough volume to produce a graph.

If you want to see how popular genealogy is compared to any other pursuit, you can do searches on the comparison. For example, how about genealogy vs. football? 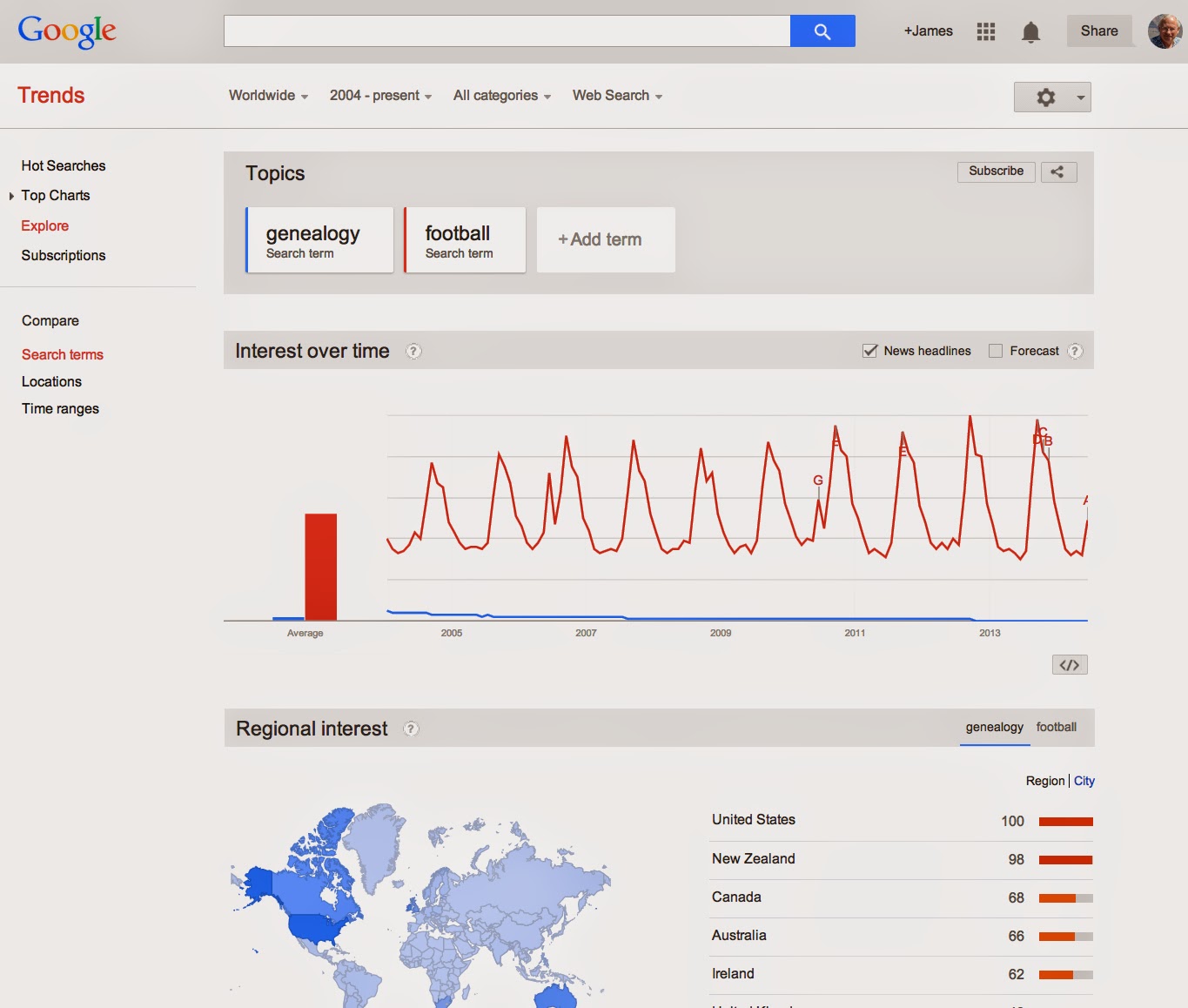 That was highly predictable. But what about something such as gardening? 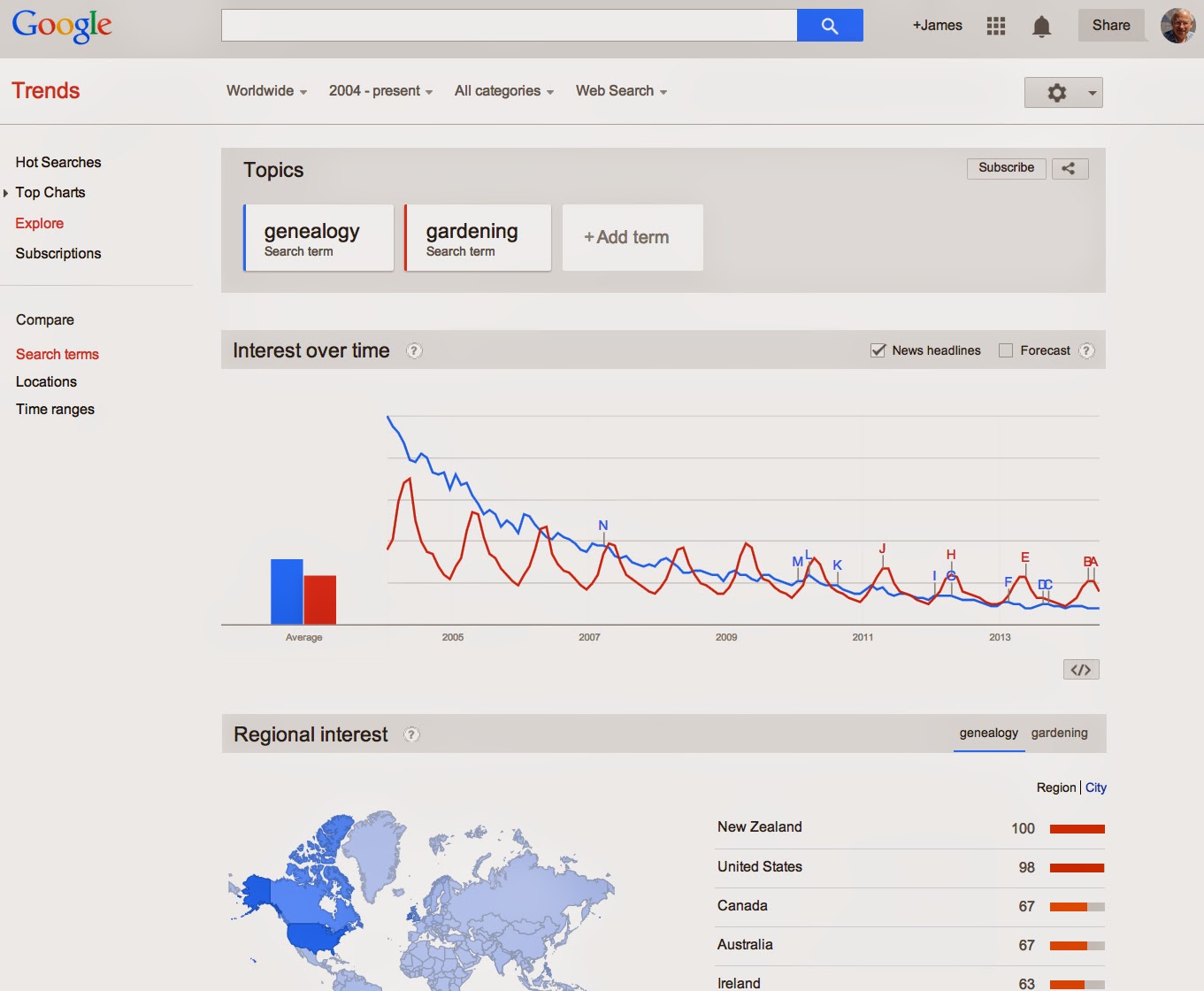 Now this gives us something to think about. At one point in the past, genealogy was much more popular as a search than gardening, but over time, gardening has stayed about the same and genealogy has declined. Also, interest in gardening peaks every year in May. What about something really active such as cycling? How does that compare to genealogy? 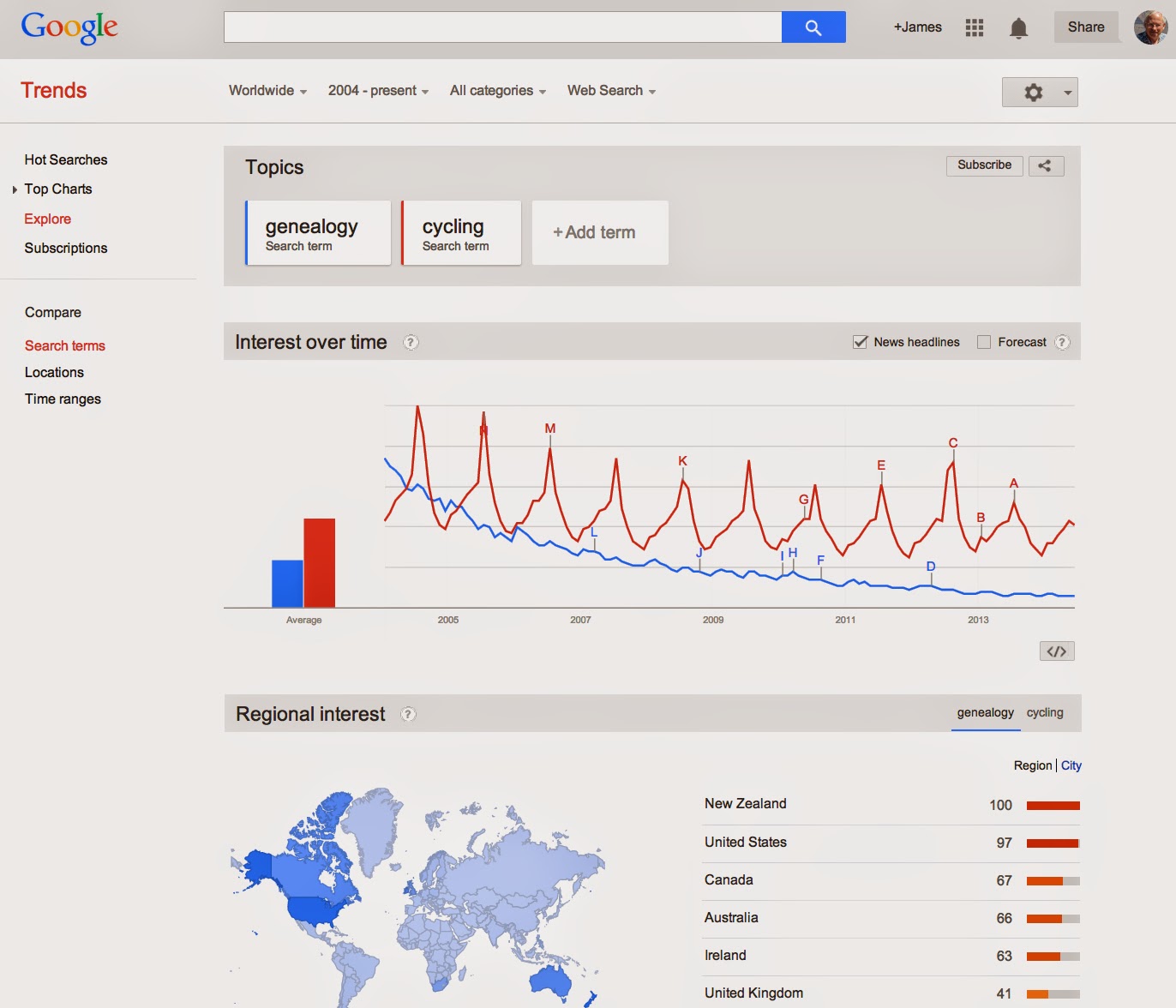 Like gardening, interest in cycling depends on the season of the year. You can try this out yourself on Google Trends.

My conclusions are consistent with what I have written in the past. Genealogy is not a fast growing interest in the world. It is slowly moving into the background noise of the Internet. It is also not one of the most popular past times as is often stated. If you want to see what I mean, just try something totally off the wall such as comparing "genealogy" to "Doctor Who." 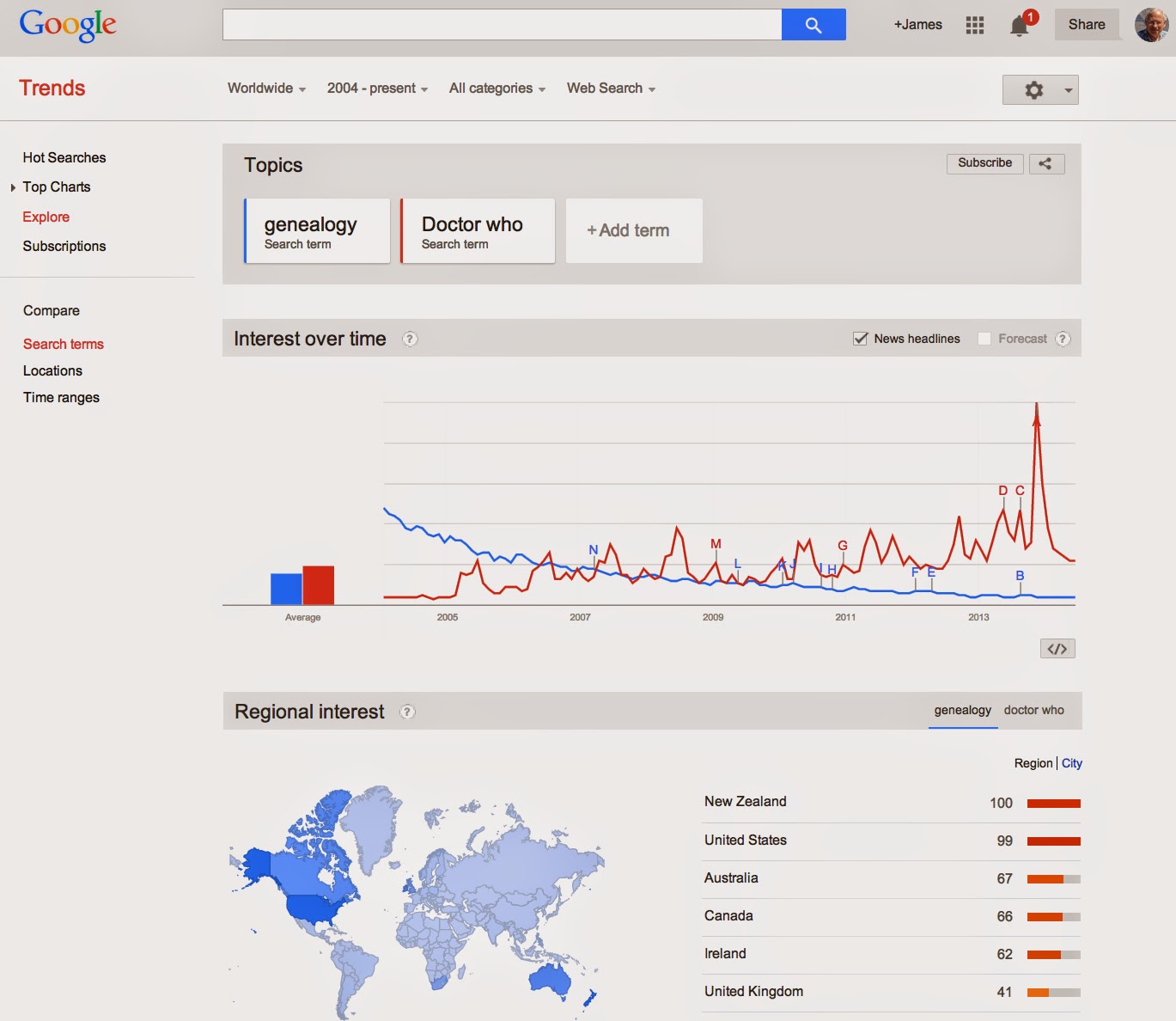 Try and figure out what this means.
Posted by James Tanner at 6:53 AM