Strategies for Locating the Unburied

What do you do to find the burial location of someone who died without being buried? Now, think about this question a little. There is no burial location for someone who wasn't buried. This includes the multitude of people buried "at sea." It also includes the huge number of people who are now and in the past were cremated.  This points out a basic issue with genealogical research: you can't find what is not there. In fact, that is now going to become my second Rule of Genealogy. As I thought about it, I also discovered the Third Rule of Genealogy.

Here we are with the three rules I have so far:

First Rule of Genealogy: When the baby was born, the mother was there.

Second Rule of Genealogy: You can't find what's not there.

Third Rule of Genealogy: Everyone dies.

Over the years, I have talked to lots of people who have been searching for years without success for documentation of a specific event in an ancestor's life, i.e. birth record, death record, marriage record etc. The reality is that there may be no record. Births were not always recorded and likewise marriages and deaths may have never been officially recorded. If you find someone's marriage record, it is evident that they were born. The same conclusion can also be made about their death. It is true that records of these important events are helpful especially in differentiating one person with a similar name from another, but it is unfortunate when a researcher fixates on a particular event at the expense of doing broader research.

The any number of reasons why an ancestors burial location cannot be determined. Here are a few suggested issues:

There are probably many more reasons, but they all add up to the same set of circumstances; a person's burial may not have been recorded.

During the past two or three hundred years, if you are interested in finding a death notice, the very first place to look is in a newspaper. Genealogists have a huge number of online, digitized newspaper websites, both subscription and free, that might contain mention of a death under circumstances where the person's body was never recovered and hence, there was no burial. Here is an example from the "The Scranton tribune., August 10, 1898, Page 7, Image 7:" 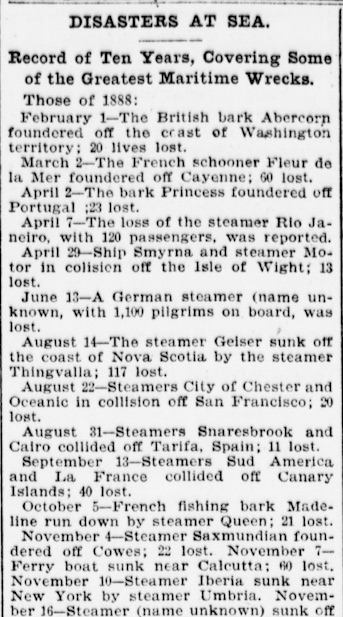 The entire article lists well over 100 major shipwrecks. This is only one example of the challenge. But this is the reason for the Third Rule of Genealogy. We can assume that after 110 years or so, that everyone is dead. There are very few reasons why some official mention of the death is crucial to identifying an individual. Do you know if one of your ancestors was or was not on one of the boats that sank at sea listed above?

The key to solving these types of missing document problems involves expanding your search to a wider selection of documents. Here is a list of alternatives places to look for death records from the FamilySearch.org Research Wiki with some of my own additions:
This list could go on an list nearly every type of record imaginable. You never really know where a mention of a death may pop up. The more you learn about an individual and their family, the more likely it will be that you will find a record mentioning their death.
Posted by James Tanner at 10:06 AM