Taking a Look at Tongan Genealogy


Tonga ([ˈtoŋa]; Tongan: Puleʻanga Fakatuʻi ʻo Tonga), officially the Kingdom of Tonga, is a Polynesian sovereign state and archipelago comprising 169 islands of which 36 are inhabited.[1] The total surface area is about 750 square kilometres (290 sq mi) scattered over 700,000 square kilometres (270,000 sq mi) of the southern Pacific Ocean. It has a population of 103,000 people of whom 70% reside on the main island of Tongatapu.

It is interesting to me that in both Arizona and Utah there are significant immigrant Tongan communities. As a result, from time to time, I am asked questions about researching Tongan genealogy. Now, most English-speaking genealogists would literally throw up their hands in despair even thinking about "doing Tongan genealogy." But the reality is that doing genealogical research has a commonality that transcends language or locality.

Translating any particular language with which you are not personally acquainted is almost inevitable if you expect to do any genealogical research in depth. Even if every one of your ancestors spoke English as the native language, as you go back in time, you will have to contend with Middle English and eventually Old English, both of which appear to be "foreign" languages to modern English speakers. In addition, even older English records are written in Latin, another language challenge.

I have studied enough languages to be comfortable doing research in almost all the Western European countries and non-European languages are only a slightly different challenge. Why did I choose Tongan as my example? Simple. It is spoken by and familiar to very few native English speakers. Here in the Western United States, we can always find someone who speaks both English and Spanish for example, by locating someone who speaks both English and some of the other of the world's languages can be problematic and Tongan is not one of the language available in the Google Translate program.

The key here is that I do not have to speak Tongan to do genealogical research in records written in that language. I also do not have to speak Tongan to help someone else do genealogy in their Tongan family lines. The vocabulary I need to do research or to help is rather limited and the resources to make the translation possible are available online. Here is an example of a Tongan text.

Start with the FamilySearch.org Research Wiki. Here is a screenshot of the Tongan Genealogy page: 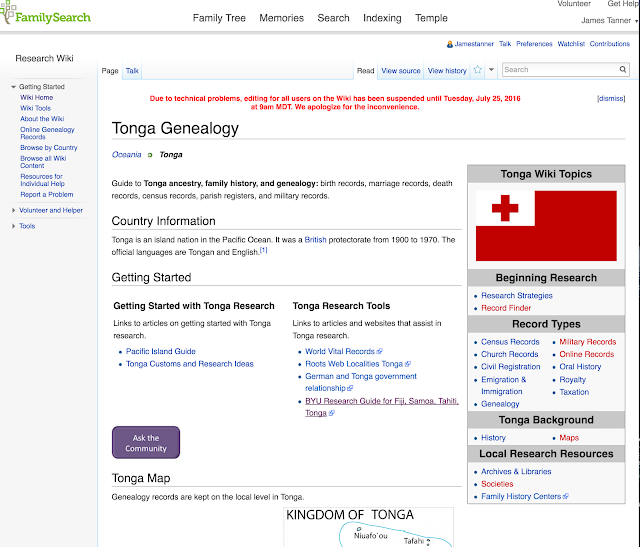 Here the page you need to read to start the process, "Tongan customs and research ideas." 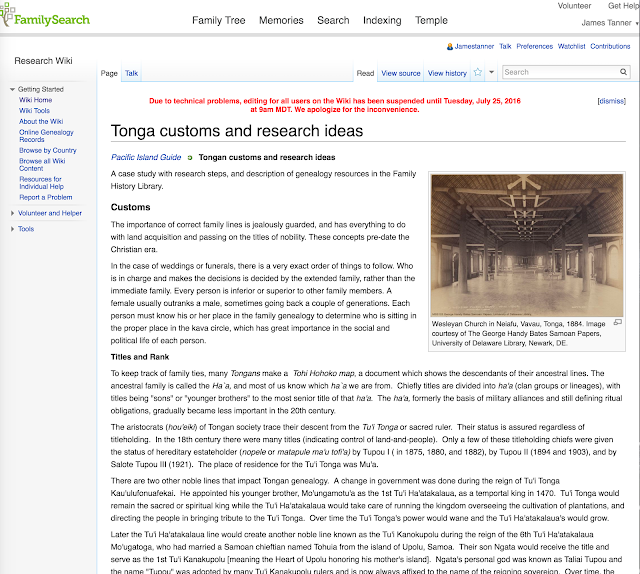 You can start by investigating the language. Here is a Wikipedia article about the Tongan language. 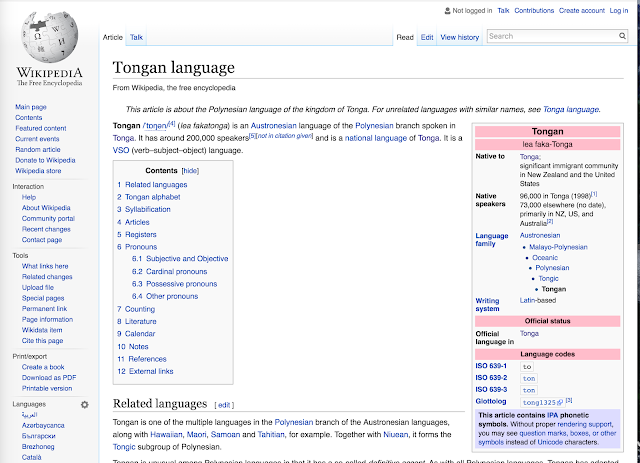 You may also want to get started with a Tongan-English, English-Tongan dictionary. Here are some that are available:

As a final note, you just might want to know that Tonga and Tongan are two different languages. Tonga is spoken in Zambia.
Posted by James Tanner at 8:34 AM