Almost all census records have one thing in common: they have a specific form for each year the census was taken. These forms are often referred to as 'schedules." Most of the original microfilm copies of the earlier schedules are difficult to read and as a result, there are websites online that have clean copies of the schedules. Above is the schedule for the 1790 U.S. Federal Census, the first year that the U.S. had a national census. This particular schedule came from the U.S. National Archives website which has a section for genealogists. See National Archives, Resources for Genealogists. There is a specific page with links to articles about each year of the Census. Here is a screenshot of that page.

One of the first things you should know about the United States Federal Census is that before 1850, the schedules contained only the name of the head of the household and other members of the household were represented only by numbers or tick marks. Here is a partial copy of a schedule from the 1790 U.S. Federal Census. 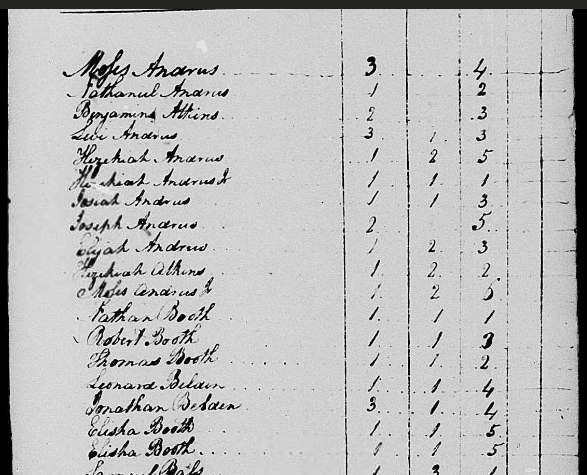 This listing of individual households is contained in the main part of the U.S. Federal Census called the Population Schedules. However, there are a number of "Non-population Schedules" that contain specialized information for many of the census years.

Before these records were digitized and indexed, a genealogical researcher had to search through each page of the census, name by name, for each locality an ancestor might have lived in. Another obvious challenge was the need to decipher the handwriting of the person taking the census who was usually referred to as the "enumerator." If we fast forward to the present time, all of the existing U.S. Federal Census records are available online. In fact, there are digital copies of the entire set of Census records or schedules on multiple different websites. For example, all four of the largest online genealogical database programs, FamilySearch.org, Ancestry.com, Findmypast.com, and MyHeritage.com, have fully indexed copies of the entire surviving census schedules. However, only three websites are digitization partners of the U.S. National Archives: FamilySearch.org, Ancestry.com, and Fold3.com. Quoting from the U.S. Archives web page entitled, "Microfilm Publications and Original Records Digitized by Our Digitization Partners:"


Our digitization partners, Ancestry.com, Fold3.com, and Familysearch.org, have digitized selected NARA microfilm publications and original records and made them available on their web sites. The list below includes all microfilm publications and original records that have been either partially or wholly digitized by the partners. The list will be updated when additional materials are digitized.

Please note: Familysearch.org is a free site. Ancestry and Fold3 are both subscription services that allow free searches of some or all index terms for each title. Free access to Ancestry.com and Fold3.com is available in all Research Rooms at the National Archives, including those in our regional archives and Presidential libraries. Agreements with our partners are such that there will eventually be free access online to all these digitized records through the National Archives Catalog. As microfilm publications become available in the National Archives Catalog, we will link directly to them in the Publication Title column.

The National Archives census records are linked from the "Search Census Records Online and Other Resources" webpage. For some time now, the following statement has been on this webpage:


Federal Census records have been digitized by several of NARA's partners, and will eventually be available as well through the National Archives Catalog.

But at the time of this writing, the records are not yet available directly from the National Archives except in microfilm format.
The key word about the U.S. Federal Census is "surviving" because some of the Census schedules have been destroyed. The main loss to the U.S. Federal Census is for the census year 1880. The commonly related story is that the 1890 schedules were destroyed in a fire. This is only partially true. Some of the schedules were destroyed in a fire but the majority of the schedules were destroyed because of a lack of oversight by the Library of Congress. You can read the entire, very complicated account in a National Archives two-part article entitled, "The Fate of the 1890 Population Census"

If you look at each of the schedules for each census year, you will see that every census year from 1790 to 1940 has a different set of questions. In the early years, the census enumerators visited each home and personally recorded the information. It is important to know that literacy rates were very high in Colonial times but mostly confined to the white, male majority. Rural populations had lower literacy rates. For genealogists, this means that the spelling of surnames and given names was often ad hoc and arbitrary until well into the 19th Century. This lack of spelling consistency directly affects the accuracy of our modern indexes to the census records.

Here are some basic reference links about the U.S. Federal Census. I suggest that you may also wish to read a book on the subject and so I have included a list of books also.


Here are the books:


Here is a link to the first post in this series: