Some more thoughts on citations in genealogy

In teaching the old Personal Ancestral File (PAF) program the subject of sources was hardly ever discussed. If it was, it was always as an afterthought. In my experience, many, if not most of the PAF users kept any source information in the notes, just as I did for years. In the later versions of the program there were little "s" marks to the side of the place fields. It was not obvious, but if you clicked on the "s" you got a form for entering source information. Here is a screen shot of the fields on the Add Individual screen: 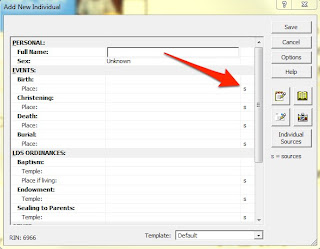 The arrow points to the "s" link. If you clicked on the link, you got a list of all of your sources, like this example showing some of the sources I had entered into program before I moved on to other programs: 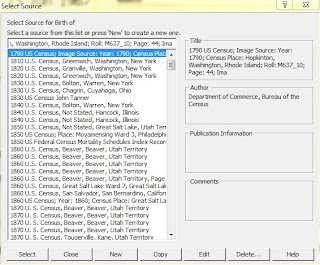 There was no concept of a "master source" as opposed to details of a master source, likely because that was not a developed idea back when the program was written.  If you wanted a new source, you clicked on the new button and this is what you got, one size fits all: 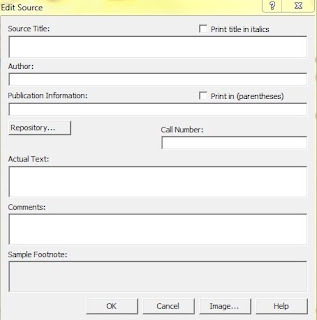 It worked OK for books, but became more and more difficult to use as sources became a hot topic and more source citation forms became necessary. Let's just say, given the sensibilities of the times, PAF was a perfectly suitable program and actually a little ahead of its time. You can note that there was also a provision for adding an image to a source. All in all, if the PAF user was diligent and used this function, the information they had in their program was very useful.  But, as I noted, very few PAF users were even aware of the little "s" and fewer still used them to enter sources.

So what happens to the average PAF user when they move to a more recent program? They are still unaware of the need for sources even though most of the newer (almost all really) have pretty developed routines for adding both a master source and details to an existing master source. Now, that brings up another problem. How many PAF users even know about the difference between a master source and a detail? As I teach a variety of programs, I find that very few people understand this concept at all.

The problem is that millions of people are still using a program that does not have any provision for expanding the source citations beyond a simple book entry form. Talking about forms of citation is entirely lost on these folks because the program will not allow them enter anything but rudimentary information. Try entering Death Certificate information into PAF for example. Who is the "author?" What is the call number?

But the problem doesn't stop there. I may be concerned about the choice of using Turabian or MLA style, but my software program either doesn't specify the format or provides fields that don't correspond to the standard styles at all. Do you know what style is used by your particular genealogy program? Can you change the style if you want to? For example, can you specify Harvard rather than Chicago?

I suggest that much, maybe most, of the problems associated with citations is actually a reflection of the development of the software programs. Until the programs stop handling sources like they were an ugly necessity, there won't be much progress in getting the general genealogical population to add sources. How about a program that won't let you enter information unless you add a source? What a novel idea. Afterthought, how about that for New FamilySearch?
Posted by James Tanner at 7:31 AM