The Ethics of Photo Restoration or Editing

In 1982, knowledgeable travel photographers detected that the National Geographic magazine cover contained a photograph that had been digitally altered. In fact, the editors of the magazine had moved one of the Pyramids of Giza in a horizontal photograph to fit the magazine's vertical format. See www.jkiel.com/comm7180/kiel_pyramid.pdf and many other sites and articles. Up until recently, the Arizona Highways magazine would not accept digital photographs. Now it is apparent that most of the photographs in the magazine come from digital images. In some cases, I can tell that the images have been altered in a photo editing program.

Genealogists are likely to have or find old photographs, sometimes of family members, other times of various subjects, photos taken on vacations, for commercial purposes or other types of photos. Digitizing old photographs and photo restoration are frequent topics in print and at conferences. But the issue of altering history is hardly mentioned.

If I had a history of an ancestor containing information I felt was objectionable, i.e. a criminal act, infidelity, poor grammar, poor choice of words, politically or racially insensitive statements, would I be justified in editing out the material I felt was undesirable? What if I do the same thing, only with an image? With today's digital tools I can literally re-write the visual past. Here is an example. Look closely at the two photographs. Do you see any differences? You can click on the image to get a larger view. 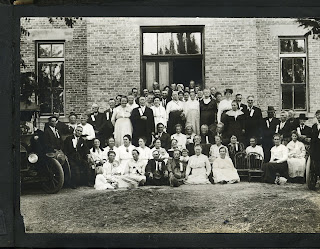 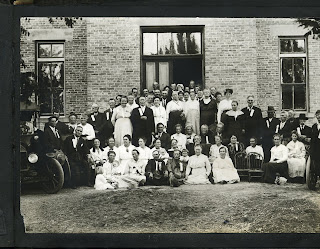 Image No. 2
Was it ethical for me to alter the photograph and thereby change history? Do you see the difference? I will give you a hint, one of the people in the first photo is missing in the second one. Now, if I were asked to determine whether or not the photograph had been digitally altered, could I do it? What if I were given the second photo and not even told that it had been altered? Could I prove in court that the second photo was not "accurate?"
Why would I alter a photograph to take out a person? I can think of a lot of reasons, starting with long standing family feuds and going on to all the other issues we sometimes find in our family trees. Is it ethical for me to do so?
What if I don't take out a person, but just freshen the people up a bit. Clear up their complexions and take out the teenage blemishes, it this ethical. If I had a bad complexion when I was a youth, should that information be hidden from future generations in the name of "restoration." What if I take a clearly damaged photograph and, in the name of restoration, put in a few of my own details in the damaged areas? Is that historically accurate or ethical? How is that different than what National Geographic did with the Pyramids?
As genealogists we can get hyper over the lack of the proper citation, shouldn't we get more upset when photographic history is altered to serve our present likes and dislikes and prejudices? Perhaps the courses on photo editing or restoration should address the ethical and historical accuracy issues involved in making digital edits to photographs. Photo editing tools are extremely sophisticated. The average person likely has no clue that the images they see on TV and in print are far from accurate reproductions of the originals. In this sense, the modern camera does lie and lie in style.
What do you think?
Posted by James Tanner at 6:00 AM