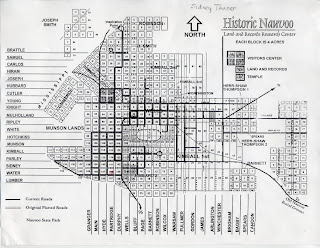 Who are you? Why do you care? Some years ago, I was visiting Nauvoo, Illinois in the middle of the summer. It was hot and humid (what did you expect?) I went to the Land Office with its computer databases of the land ownership records of Nauvoo when it was one of largest, if not the largest city on American Frontier. We were in Nauvoo to dedicate a gravemarker to my wife's ancestors who had died on the banks of the Mississippi River and never made it across the continent to Utah or Arizona. I found the description of my Great-great-grandfather's property when he lived in Nauvoo. Putting on my genealogy hat, I copies the images onto a CD and put it in my pocket. Walking out the door of the Land Office, one of my wife's relatives, who I met outside (who are all my good friends) asked me if I was going to see the property? Oh, I replied, its hot and sweaty. Maybe some other time. Oh, no they insisted you need to go right now. Look its only a few blocks away!

My 3rd Great-grandfather and most of his family joined The Church of Jesus Christ of Latter-day Saints in 1833 in Bolton, New York. He left New York with his family, including my Great-great Grandfather Sidney Tanner and traveled across the country to join the body of the Saints in Kirtland, Ohio (sorry, correction, I put Illinois). His sons were full grown and married with their own children. They were known a extraordinarily strong men. Willingly facing the dangers of the frontier and the anti-Mormon mobs, they traveled with the Saints from Kirtland to Missouri and back to Nauvoo, where they build substantial homes, ready to stay the rest of their lives. However, they, with the rest of the Saints were driven by the mobs out of their homes in the middle of the winter of 1846 across the Mississippi and out into the wilderness. They crossed the Plains to Utah and Sidney and his family ultimately moved to San Bernardino, California where my Great-grandfather, Henry Martin Tanner was born. Driven once again, this time by Johnson's Army, Sidney Tanner and his family finally settled in Beaver, Utah.

Just after he was married, Henry Martin Tanner took his young wife and in response to a mission call from Brigham Young moved to a desolate spot on the Little Colorado River called St. Joseph, now called Joseph City. His son LeRoy Parkinson Tanner married and moved to St. Johns, Arizona where my own father was born and raised and where I lived as a child.

As I walked through the heat and humidity of Nauvoo, I really wasn't thinking of any of this. I didn't think about Sidney as he crossed the Plains, losing his son, also named Sidney, when a wagon wheel ran over his head. I didn't think about how Sidney left the wife of his youth, buried on the Plains. I didn't think about leaving Nauvoo in the dead of the winter, crossing the freezing Mississippi to the nearly frozen Iowa wilderness. We walked down the now deserted streets of Nauvoo, only some of the restored buildings are still standing. I had been in Nauvoo a number of times to visit. It is a beautiful place on a big bend in the Mississippi river, across from Montrose, Iowa and just north and east of Keokuk. I had always heard about the Spirit of Nauvoo but figured it was only a manner of speaking.

We walked down the wide straight streets and quickly found the corner lot where Sidney had lived. The only remains were a large hole lined with bricks that used to be a basement. As I stood on that corner looking at that abandoned lot, all I can say is all of the emotion and pathos of the history of these early pioneers came over me like a wave. I realized, like few times before in my life, exactly who I was and who these people, names on a pedigree sheet, really were. It brings tears to my eyes now, even years later, to think about the lives of those people who sacrificed so much. I now understand the Spirit of Nauvoo and although I am still making discoveries, I found my voice. Genealogy is not dead people, really, it is live people with real experiences. 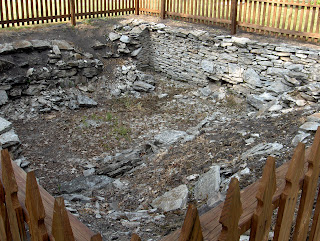