In my last blog post, I got involved in making a list of online sources for digitized maps. When I sit down to help someone with their research, one of the very first things I do is check the locations mentioned on a map, usually Google Maps program. Since I am very visual this helps me get oriented as to what and where the events occurred that might give rise to more sources. But a more fundamental reason is that the people I help seldom have the vaguest clue about where all this stuff they have about their ancestors occurred. Knowledge of the geography is one factor that separates a knowledgeable researcher from one that has not yet understood the concept of genealogical research. If the researcher lacks geographic orientation, I can very quickly determine that they also lack understanding of the types of records that will help them further their research.

So my motivation was somewhat selfish in that I wanted to see whether or not my claim was true that digitized maps were extensively available. There is no doubt that huge map collections exist, my question was to what extent are these available online. For example, the Library of Congress describes its collection as follows:


The Geography and Map Division (G&M) has custody of the largest and most comprehensive cartographic collection in the world with collections numbering over 5.5 million maps, 80,000 atlases, 6,000 reference works, over 500 globes and globe gores, 3,000 raised relief models, and a large number of cartographic materials in other formats, including over 38,000 CDs/DVDs. The online Map Collections represents only a small fraction that have been converted to digital form. These images were created from maps and atlases and, in general, are restricted to items that are in public domain, meaning those which are not covered by copyright.

So, one thing I learned is that access to some types of information is measurably impeded by copyright restrictions. But my response to that point, from a genealogical perspective, was that many of the maps under copyright deal with current conditions. What about the historical maps? These would seem to be the ones most useful. Anyway, you can't copyright a list of place names so there should be a way to find almost any place even if the maps were locked up by copyright (I was going to use the phrase silly, ridiculous, out-dated, bureaucratic, oppressive, impractical, copyright, but thought better of it). Here, of course, I had to use a measure of self-control to avoid going off on a tangent about why all those terms apply to our current copyright law, but that is another post for another time.

Back to maps, so why would I make a hard-to-substantiate claim that almost all the maps necessary for research had been digitized when the Library of Congress clearly states that only a "small fraction" have been digitized? Why the discrepancy? Well, from one standpoint, the United States Government is one of the poorest examples of making their records available through digitization. Some single states have more digitized and freely available records than the entire U.S. Government has yet done so. In fact, the Library of Congress has only 12,961 digitized maps online. Whoa. Why that tiny number? How can they possibly use the "copyright excuse" for that shrinky little smidgen of maps? Good question. 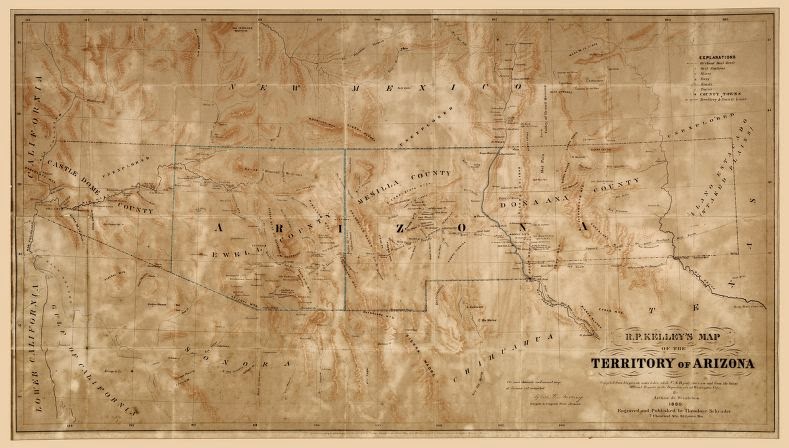 This particular map is R.P. Kelley's map of the territory of Arizona, created or published in St. Louis, Missouri by Theodore Schrader, 1860. Now, if you search for this same map in WorldCat.org, you find that at least10 other entities, universities, libraries, historical societies etc., have copies of the same map, not including the large online map websites. Here is a link to a website illustrating 10 old maps with the same information as this example.

It is also possible to find another map from exactly the same year. Here is an example from the David Rumsey Map Collection.

But what if the location you are looking for is recorded only on a map that has yet to be digitized? Do you mean like buried treasure? Or do you mean a geographic feature such as a town or or physical feature? As genealogists we may be looking for buried treasure, but we are usually looking for a location in a specific jurisdiction so that we can find where to look for source records. So we jump to the USGS Topographical Maps which cover the entire United States and the online index to all of that provided by the U.S. Board of Geographic Names. Thus we can find places that are no longer on current maps.

So the question evolves into whether or not you are interested in historic maps per se, or if you are actually looking for a location. Like I mentioned the Library of Congress is not such a good place to look for maps online. I would suggest OldMapsOnline.org as a better source. But the point here is and the point that was reinforced by my exercise in making a list of online sites, that there are more maps online than you have the patience to look at and finding a location using satellite maps, Google Maps, the USGS and the Geographic Names Board makes the job possible even if you can't find the place on a map.
Posted by James Tanner at 6:34 AM