If you look through the list of sources on any of the larger online genealogical database programs such as FamilySearch.org, Ancestry.com or MyHeritage.com, you will soon discover that there are temporal limits to the coverage of their collections of records. For example, if you go to the Card Catalog on Ancestry.com, you will see that the earliest dates in the Filter are the 1600s. See this screenshot below: 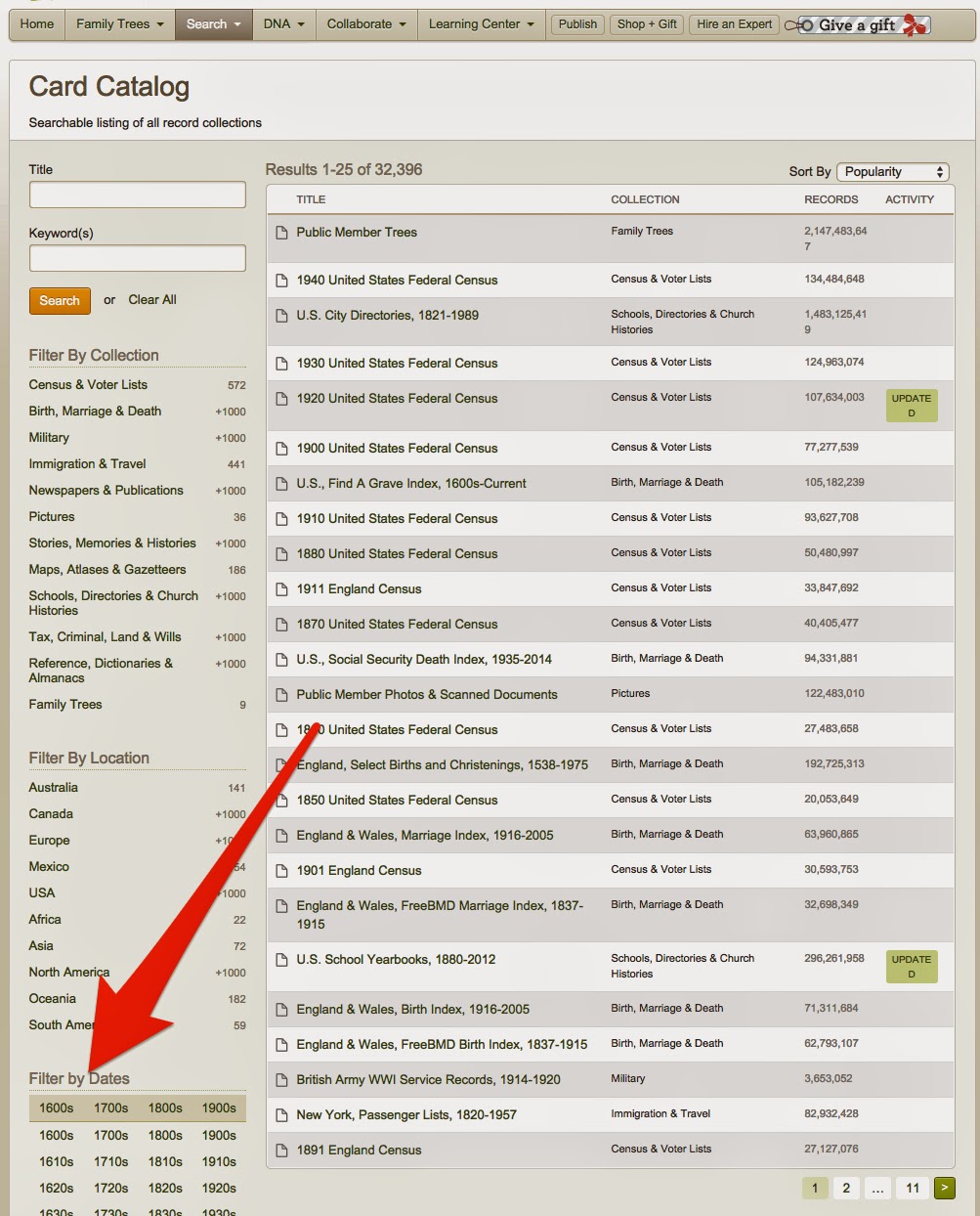 There are a total of 6,160 collections that include records in the 1600s, as of the date of this post, But you can also see from looking down the list that there are very few that go back into the early 1500s and almost no records earlier than 1500 A.D. Here are a few of the exceptions:

[Note: the links are to Ancestry.com and you will need to login to see the databases]. Here is a page from the Lübeck, Deutschland, genealogisches Register, 1200-1910: 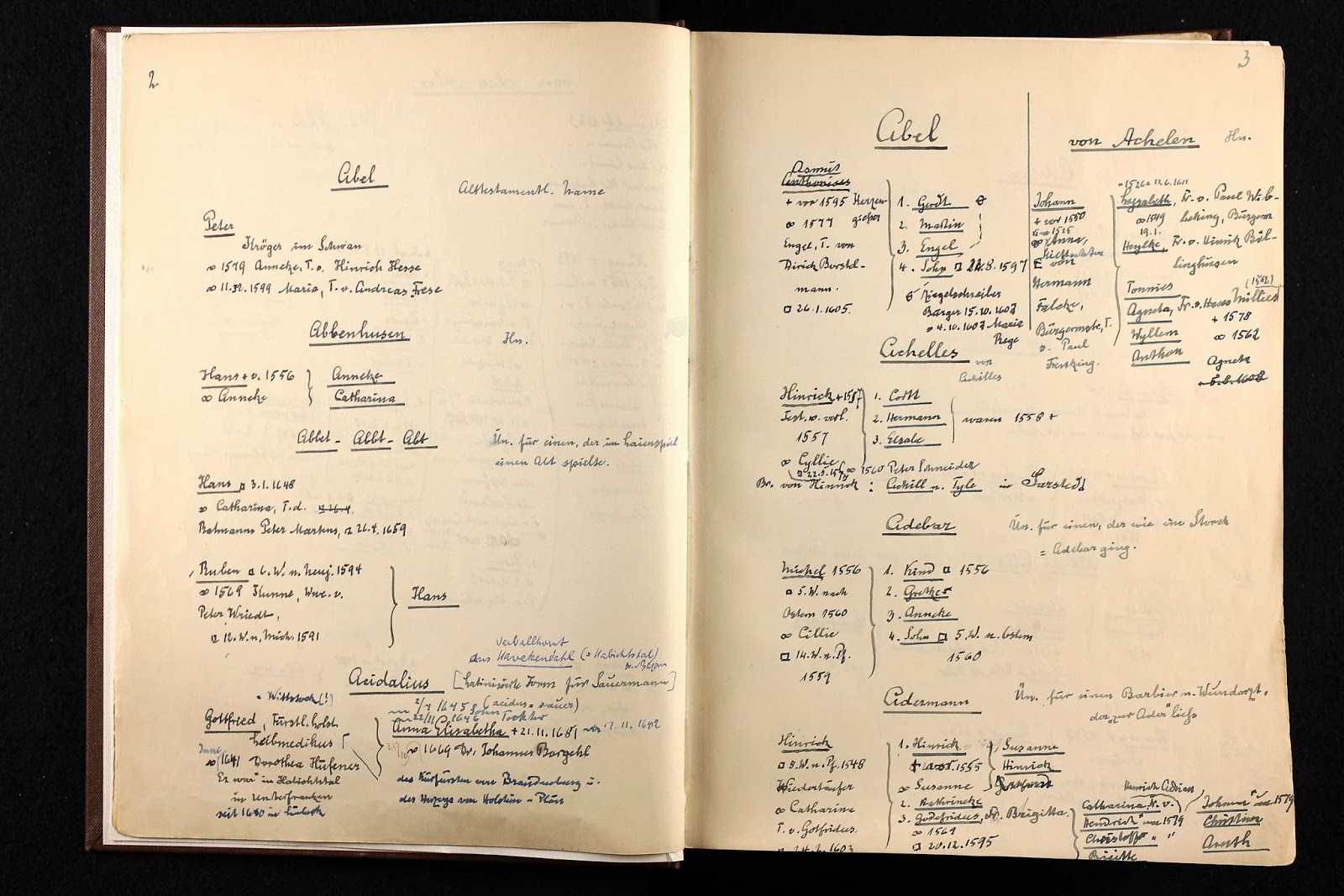 There are other records, of course, but what are the chances that your ancestors end up in any one of these records? Before I try to answer that question, let me review some of the linguistic and record keeping history in Europe. I might note that there are places where family lines can be traced back much, much further such as China, where some genealogies go back as far as 200 B.C. or so. But even in these cases, it depends on whether or not you can trace your own ancestry to one of these ancient lines. For a useful explanatory summary of the extant English records, for an example, see MedievalGenealogy.org.uk

If you are attempting research back into the 1500s or earlier, you will certainly find that the modern languages spoken today are not the same as those spoken and written in these earlier times. You will also find many of the records written in some form of Latin. In England, because the first printed books did not appear until the end of the 1400s, most of the records and books before that time are comparatively rare, especially those written in the common language and not in Latin. This is true in other European countries also.

The further you research into the Middle Ages, you will find that from 900 A.D. until after 1300 A.D., Latin in various forms was the predominant and official language of the Catholic Church and was used for all forms of scholarship. Before the age of printing, introduced by Johannes Gutenberg around 1439, all books and other manuscripts were handwritten and the number of copies of any one book or record was very limited.

The challenge of this early research is not only learning to read Latin, but also learning to decipher earlier forms of handwriting such as Carolinian script used from 800 A.D. to 1200 A.D. Here is an example of Carolinian in the variation called Beneventan:

The following images are a few illustrations of manuscripts starting with the 1600s and going backwards in time. Mind you, all these are examples of English books:

Going back yet another 100 years begins to be very difficult. The 1300s are well into the Middle Ages and all of the modern languages have changed considerably since that time. To read the manuscripts, you will have to learn at least Latin and perhaps other languages.

Now we are really launching off into the past. The 13th Century begins to be even before the Middle Ages.

Let's go back another 100 years. I am doing this to illustrate what is really involved in producing a pedigree that goes back before 1500 A.D.  Here is a manuscript from the 12th Century:

This last manuscript is in Greek. I am not trying to discourage anyone from doing research back into the Middle Ages and beyond, I am just suggesting that unless you have these skills and can read these manuscripts, you are probably copying and not doing research. When someone mentions to me that their genealogy "goes back to Charlemagne" or even "back to Adam" I always think about these examples of the script and language necessary to do that kind of research even assuming it was possible to construct such a pedigree. I fully realize that there are people who can read these manuscripts, but if you read what they say, you will quickly realize that pushing your pedigree back before about 1550 A.D. would require years of study and hard work.

I have quoted this before, but it bears repeating from time to time first printed in the Ensign magazine of The Church of Jesus Christ of Latter-day Saints in February 1984. I suggest you read the entire article if you think your pedigree can go back to Adam,


Robert C. Gunderson, Senior Royalty Research Specialist, Church Genealogical Department. The simplest answer to both questions is No. Let me explain. In thirty-five years of genealogical research, I have yet to see a pedigree back to Adam that can be documented. By assignment, I have reviewed hundreds of pedigrees over the years. I have not found one where each connection on the pedigree can be justified by evidence from contemporary documents. In my opinion it is not even possible to verify historically a connected European pedigree earlier than the time of the Merovingian Kings (c. A.D. 450–A.D. 752).

Every pedigree I have seen which attempts to bridge the gap between that time and the biblical pedigree appears to be based on questionable tradition, or at worst, plain fabrication. Generally these pedigrees offer no evidence as to the origin of the information, or they cite a vague source.

If you are interested in doing research in Europe during the Middle Ages, I suggest that you start early and begin by taking a course in Latin.