The underlying history of the settlement of the North American continent by Europeans is primarily one of land acquisition and exploitation. This is a fact that is pivotal to genealogists in understanding how most of the land was settled. The modern expansion of cities into subdivisions is but a faint shadow of those early land speculation deals. Take for example the Ohio Company, also known as the Ohio Company of Virginia. Quoting from the Wikipedia article of the same name:


The Ohio Company, formally known as the Ohio Company of Virginia, was a land speculation company organized for the settlement by Virginians of the Ohio Country (approximately the present state of Ohio) and to trade with the Native Americans. The Company had a land grant from Britain and a treaty with Indians, but France also claimed the area, and the conflict helped provoke the outbreak of the French and Indian War.

In fact, land speculation goes back to the Mayflower and beyond to the Spanish conquistadores. Much of the settlement of the western part of what is now the United States, occurred as a result of various land sales and promotions usually referred to collectively as the Homestead Acts. This is how my great-grandfather, Henry Martin Tanner, obtained some of his land in Northern Arizona. Here is a copy of the Land Patent issued to him for 320 acres in 1927. You might note that the Land Patent was signed by President Calvin Coolidge. 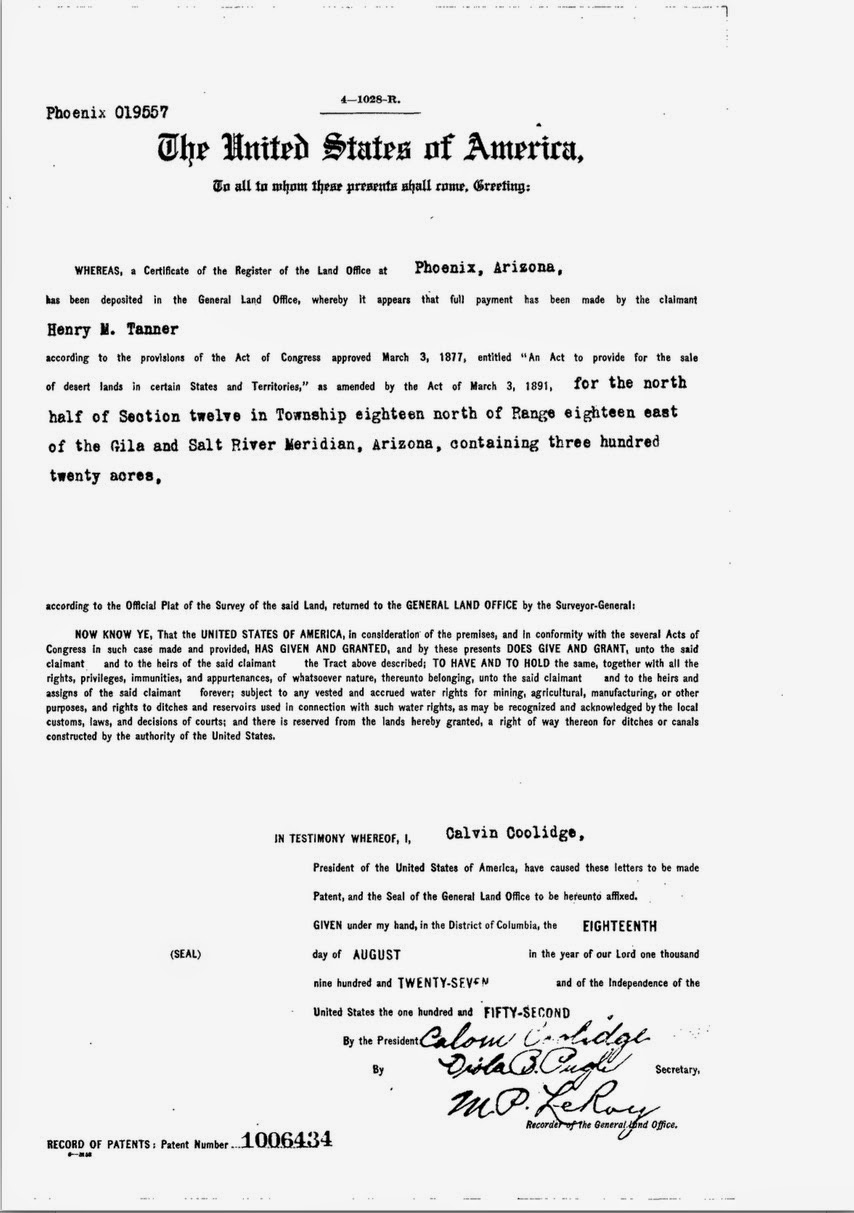 Understanding the way land was acquired and owned is another one of the vital components to advancing your genealogical research. Land records are usually available and in most instances, if destroyed, they are almost immediately reconstituted. This series is directed at the issue of land ownership and the documents supporting such ownership.

Just a note going back to the Mayflower passengers, here is a statement from the University of Massachusetts at Amherst Libraries about early land ownership in America:


Land records exist from the first permanent settlements in America. In Massachusetts, "the earliest known deeds were recorded shortly after the arrival of the Pilgrims at Plymouth in 1620." Land records are among the best-preserved, largest, and most comprehensive genealogical record groups in the United States. Because land was inexpensive and readily available, 90% of adult free males were landowners before 1850.

Many of the genealogical knots we encounter in early american history can be untangled by examining the land records.
Posted by James Tanner at 8:36 AM