All the Ships at Sea

Genealogy, in many cases is a matter of connecting the dots. For immigrants to America and other places, the "dots" includes not only discovering their place of origin, but also how they managed to cross the ocean. For many American immigrants it is sometimes possible to discover them in passenger lists both when they arrived in America and when the left Europe. In some cases, the name of the ship carrying its passengers has been preserved in family records.

One of my ancestral families, the Parkinsons, came to America from England by way of Australia. Our family records give the name of the ship that they took from England to Australia. It is recorded as the "St. Vincent" arriving in Sydney, Australia on the the 13th of March, 1849. Fortunately, we have a rich heritage of shipping records that include passenger lists and ship manifests, many of which have been digitized and are available online. So I began my search for the St. Vincent. A quick Google search turned up the following from this website: http://www.bruzelius.info/Nautica/Ships/Merchant/Sail/S/St_Vincent(1865).html

Either the dates in the family record are wrong or this was not the ship. However, one of my relatives found the following ship's passenger list from FamilySearch.org for the Parkinson's arrival in Australia on the 11th of March, 1849 on a ship named the "St. Vincent". This corrected the date of their arrival and also confirmed the ship name. 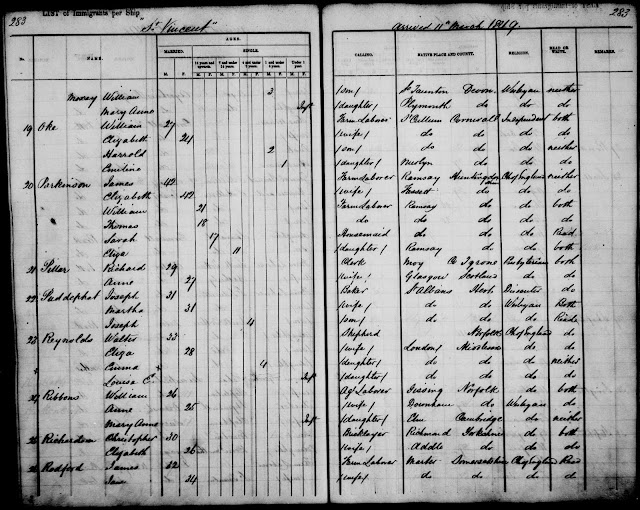 So, despite the record I first found, there must be another record of a ship by that name. A continued search found the New South Wales 'Online' microfilm of shipping lists. This long list contained the following record of the arrival of the St. Vincent on 11 March 1849.

This website also had a digitized copy of the above passenger list. Incidentally, I also found that Trove.nla.gov.au, the huge Australian website from the Australian National Library has a searchable list of newspaper immigrant arrivals.

These finds show that there are several ways to add information about an immigrant:


As I kept searching, I found yet another website listing the arrival of the ship in Australia. See Passenger Ships Arriving in Australian Ports. In fact, I kept finding more and more references to the ship lists that included this particular vessel. In fact, I found a drawing of the ship leaving England.

One significant collection of passenger lists is contained in the British Board of Trade Series 27 Passenger lists for ships departing English ports from 1890 to 1960 which can be searched on Findmypast.com and Ancestry.com. The key here is that the lists contain the names of the ships. Many European immigrants who were coming to America left from ports in the United Kingdom because traveling "steerage" from a British port was less expensive than from European ports. Unfortunately for researchers, to qualify for the lower price, the passengers had to have a British residency of six weeks and so some passengers may have changed their names to avoid the increase in cost.

These examples illustrate an important point. Be creative in your research. Look for details and you just might find a treasure trove of information about your family.