Why I Went With the Apple iPad Pro 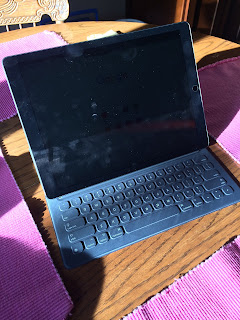 This post is being written on an iPad Pro with the 12.9 inch display. I spent about 3 months (off and on in between everything else) researching whether or not I wanted to replace my MacBook Pro laptop with the iPad Pro. I went through every program (app) on my MacBook Pro, one by one, and analyzed how I used the programs and how they would function on the iPad Pro (or not). I have been using a variety of laptops computers, both Apple and Windows, for years. I would characterize most of them as "luggable" rather than actually mobile. I have also been using an iPad since they were introduced. I have tried using a keyboard with an iPad in the past and the problem was primarily with the keyboards.

The reality of using an iPad for data entry and general computing is that the iOS operating system and the apps that have been developed are not all "fully functional" computer programs. In the past, the programs or apps had to accommodate the limited capacity of the tablet computers. Now, the level  of sophistication of the tablets, in some limited cases, has reached the "fully functional" computer stage and in fact, some of the applications work better on my new iPad Pro than they do on my iMac.

As I am writing this post from my iPad Pro, I find some differences in the standard Apple keyboard and cover and I ordered with the machine. The keys are a little bit stiffer than I am used to, but with a few minutes of use, I am typing along at my normal, fast speed. I am also using the iPad Pro while sitting in an easy chair, looking out at the mountains, rather than stuck at my desk. Normally, with a laptop, I would have a rather heavy weight on my lap and the machine would soon get so hot to be uncomfortable. The iPad Pro is not heavy and it never gets too hot.

I also like the fact that the iPad Pro is instantly on. Both my MacBook Pro and iMac take up to five to ten minutes to start up. I can be typing in about 10 seconds with the iPad.

What about the functions of the iPad Pro? Word processing i.e. entering text, is exactly the same on the iPad as on my other computers. Copying and pasting is really a different task. Editing the text is a new experience also. I have a whole new set of skills to learn. I purchased the Apple Pencil with the iPad Pro and it turns out to be extremely useful. If I want to insert a screen capture or other image, I will have to learn a whole new sequence of actions.

The question I needed to answer before purchasing was how many of these differences exist and were there work-arounds? So far, I am more impressed with the advantages than the limitations. I can do things on the iPad Pro I cannot do on my computer, particularly the drawing options.

I still have some issues to resolve, such as showing presentations and other activities I only do from time to time and I will post my comments as I get into those issues. All and all, I am super impressed with the machine and glad I made the decision. It remains to be seen if I will encounter a deal breaker.