Critically examining a Will -- Genealogical Viewpoint -- Will Language


I concluded the introduction to this critical examination of wills with a note about the conservative nature of the language used. Some of the same words and phrases common in 17th Century wills are still in use today. This is no accident of history. Will language is conservative because there is a need for predictability. In the United States we have inherited much of our law from English Common Law, that is judge-made law based on hundreds of years of court decisions. Any change in the language of a will (or other legal document) will inevitably require judicial interpretation. Those who would "reform" the law often underestimate the impact their suggested changes will have on subsequent court cases involving their innovations. Hence, the law and language of wills and many other areas of our legal inheritance tend to remain the same year after year.

I am going to return to the thorn, better said, I am going to write about the language and alphabet used in old wills. Like many subjects, historical orthography has its controversial aspects. One of the most commonly attacked is English spelling conventions. As we all learned in school, there is a "right way" and a "wrong way" to spell every one of the millions of English words. It is just too bad for all the children in grammar school with their spelling lists, that this is not a true statement. What is really the case is that there is an "accepted usage." Languages including their writing systems, change over time.

Genealogists who persevere in doing research back into the dim past, find out pretty quickly that the words, grammar and spelling change as we go back in time. English is usually divided into three main historical phases; Old English, Middle English and Modern English. Even today, spoken and written English is far from uniform across the world and as much as we would like uniformity, there are significant differences. The video at the beginning of this post reviews the earliest written English law in existence. A digitized copy of the book can be viewed at the University of Manchester Library, Image Collections. Here is a brief quote from the website outlining the contents of the book. You might note, that this book is likely the earliest genealogically significant record also.

Here are two sample pages of the book.

Here is an enlarged view of the text. 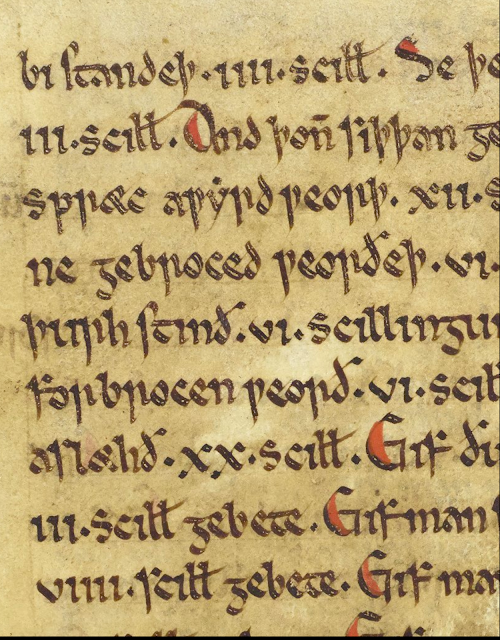 If you look closely, you will see that there are two extra letters used in the alphabet of the time; the thorn and the wynn. The thorn represented the "th" sound we now have in the word "that." The wynn was a replacement for the double "u" or "uu." We retained the "w" as a separate letter but the thorn disappeared from our alphabet. Here is what the wynn (also spelled wen, pynn and pen) looked like.

To refresh your memory, here is what the thorn looked like.

The thorn appears in the above enlarged manuscript on line two. As you can see from line eight of the excerpt, the double uu was being used in the 12th Century. The wynn was not uniformly used.

Wills actually go back into antiquity, but from a genealogical standpoint, the earliest wills in a recognizable form date from the late 13th Century. See Online International Bibliography of Medieval and Early Modern Wills and Probate Inventories. For early examples, see

The earliest will on FamilySearch.org dates from 1698 in Maryland. Here is a copy of the will.

Here is an enlarged view of the first part of the will. You will note that the language is very similar to that used in wills today.

I will continue with this examination of wills.

Here is the previous post in this Will series.

http://genealogysstar.blogspot.com/2016/05/critically-examining-will-genealogical.html
Posted by James Tanner at 9:06 AM