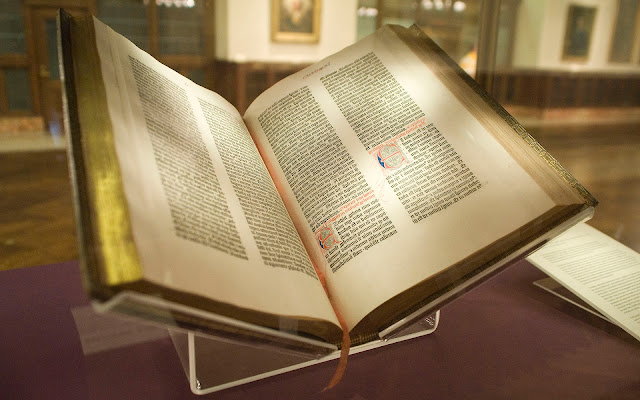 By NYC Wanderer (Kevin Eng) - originally posted to Flickr as Gutenberg Bible, CC BY-SA 2.0, https://commons.wikimedia.org/w/index.php?curid=9914015The classical definition of plagiarism is the practice of taking someone else's work or ideas and passing them off as one's own. Plagiarism does not rise to a violation of copyright because ideas are not copyright protected. However, plagiarism is close to fraud. Plagiarism becomes a concern when the people involved are concerned about priority. One common situation is when a university professor develops a new theory in his or her chosen field and someone hears the idea in a class and runs off and publishes a journal article before the originator can do so thus trying to establish priority. For examples of plagiarism that went to court, see "Plagiarism Lawsuits. Top 10 Most Interesting Cases."
Unfortunately, plagiarism is rampant in the genealogical community but claims are almost always unenforceable. If I do some research about one of my ancestors, say John Doe b. 1880, d. 1950, and I post that bit of information on one of the millions of online family trees and then someone else, who is one of my relatives, comes along and, without doing any research, copies the information and puts the information in their own family tree without mentioning where the information came from; what can I do about it? How would I even know where my relative got the information?
When I began accumulating my own family history, I made some obvious errors. For example, my Great-grandfather, Henry Martin Tanner, was born in California in 1852. The records that I had at the time showed his birthplace as San Bernardino, San Bernardino, California. The problem was that San Bernardino County was not created until 26 April 1853. Generally, the location of genealogical events should be recorded as they existed at the time of the event so the correct county is Los Angeles. See https://publications.newberry.org/ahcbp/documents/CA_Individual_County_Chronologies.htm#Individual_County_Chronologies. However, because I was one of the earliest online contributors of my family's genealogy, members of my family copied my information as online family trees became popular. The vast majority of my relatives who put their information online either copied the wrong information from me or used the same incorrect source I did to replicated the error. However, this example is even more complicated. Some genealogists insist on recording the "current" jurisdiction of the event rather than the historical one, claiming that the current location is more reliable for finding information. Could I claim plagiarism because people copied my research? Did I really want everyone to know that I had disseminated inaccurate information?
The dividing line between copyright protection and plagiarism is vague, to say the least. This is especially true today in the United States since the adoption of the Berne Convention for the Protection of Literary and Artistic Works in 1989. The major change in copyright protection added by the adoption extended coverage to all works whether or not any type of claim of copyright was made. So, this post is copyright protected even though I have not made any attempt to give notice of my claim. Hmm.
It is entirely possible to imagine a situation involving writing about genealogy where a claim of plagiarism might be made and I have heard of a few such instances primarily involving commercial or semi-commercial enterprises. However, if failure to cite a source in a family tree can be considered to be plagiarism, then genealogy is rampant with examples.
Before someone gets all huffy about a supposed plagiarism occurrence, I suggest that they make sure that the idea they had was original and not just copied from someone else. I also suggest a greater effort to convince everyone to document their sources.
Previous posts on this topic.