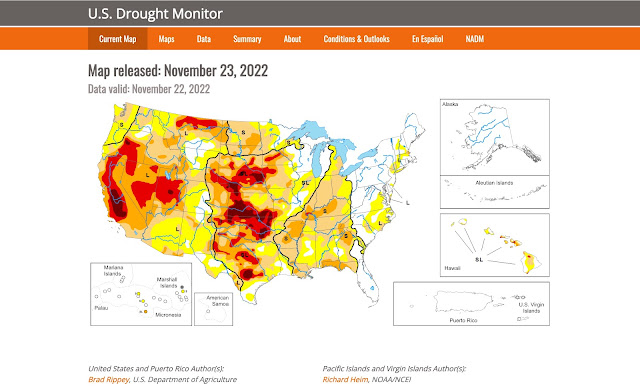 When I was in elementary school, we had a class on the history of Arizona. Since we lived in the Salt River Valley (Phoenix), one of the things we studied was the prehistoric inhabitants of the valley who had constructed a vast network of canals to take advantage of the water in the Salt River. Here is a short quote about these people from an article entitled "The Hohokam."

The name Hohokam (pronounced with the accent on the last syllable) comes from the word Hoohoogum, the name given by the contemporary Native Americans in this area to the prehistoric peoples whom they claim as their ancestors. The Hohokam people occupied the valley and much of southern Arizona from A.D. 1 to 1450.

In the 15th Century, this extensive culture seemed to simply pick up and leave the valley. In essence, they disappeared. There are a number of theories about why they left the valley that mostly center around their water supply. As I grew up in Phoenix, I often speculated at what would happen if we had an extended drought. What would happen to our own city if there was a severely limited water supply?

Now let's flash forward to the present. Of course, it is obvious that I have been doing genealogical research for a long time. The most prevalent theme of my research has centered on people who left one part of the world for another. The reasons for this movement include drought, but also include wars, persecution, disease, and famine. One example from my own history is the arrival of my ancestors who came to the United States to escape the effects of the Potato Famine in Ireland. See "Great Famine (Ireland)." Another example from our own country is the Great Migration of more than six million African American people from the South to other parts of the country from about 1915 to 1970. These migrations are a challenge to establishing genealogical ancestral continuity i.e. identifying the origin of a specific ancestor or family.

Today in the United States, the country is preoccupied with politics. But the effect of politics on genealogy will be slight compared to the effect on our country of the background natural conditions of plague and drought. We have all seen the impact of the COVID epidemic, but I am certain that few of the people in the country are even aware of the larger effects of the drought. Deaths from the COVID epidemic in the United States are now over 1.1 million. The effects of the drought such as higher food prices within an overall increase in inflationary costs are usually blamed on the government and politics. Now we get to live during a time of natural disaster that will rival and may exceed those of the past.

As for the drought, the United States might generally become aware of the impact when the water that supplies the Salt River Valley dries up and the 5th largest city in the United States runs out of power and water. Where will the people go this time?

For going on two years now, I have been helping with online consultations that originate with the Salt Lake City FamilySearch Library (Family History Library). Almost every one of these twenty-minute consultations have centered on finding an immigrant ancestor. Week after week, I get questions about immigrants from one part of the world to another. Recently, I have fielded questions about immigrants from Ireland, Poland, Spain, Italy, the Czech Republic's former incarnations, Germany and its former incarnations, and many other places.

It is obvious to me that we are about to go through another great migration. One difference is that today, this migration will be painfully and completely documented. Maybe I can summarize with allusion to a quote that is often attributed to the Chinese, that we certainly do live in interesting times. (See "May You Live in Interesting Times."

The past is really just a rehearsal for the present.