Sometimes all the computer power in the world cannot help you find the family history records you are looking for. My Great-great-great grandfather, John Tanner, is a case in point. My research goal was really to look for John's great-great-grandfather, William Tanner. But the search for William eventually lead to direct information about John Tanner's birth, dates that had been passed down for hundreds of years and had been the subject of a number of books. Unfortunately, not one of those traditional reports had any reference to a source for the information concerning John Tanner's birth.

Why John Tanner? He is noted as the first of the New England Tanner's to join The Church of Jesus Christ of Latter-day Saints. As mentioned, he has been the subject of a number of books and at least one movie. The recently released movie relates his conversion to the LDS Church and some few events of his life. See Christensen, T. C., Matthew D. Maddox, Shauna Thompson, Nathan Mitchell, and Michael A. Dunn. Treasure in heaven the John Tanner story. Orem, UT: Candlelight Media Group, 200.

The books about John Tanner include:

And a few others.

In all those written works, there is very little citations to any sources. In that regard, it must be said that the concept of providing a source for genealogical information has been considered necessary only more recently. 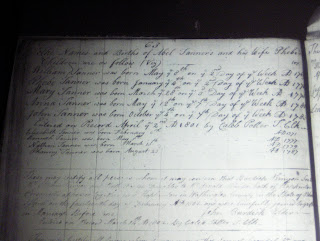 In order to find out information about the Tanner family, I decided to read through most of the early town record of John's birthplace in Hopkinton, Washington County, Rhode Island. Hundreds of pages of handwritten records which finally revealed the birth record for John Tanner and his siblings. It is important to know that I did not know the record existed and I had never seen a reference to it. Additionally, there was no reason why the record should have been found in the town records. It just happened that the Town Clerk was also a Tanner and a near relative, probably and uncle. You cannot always see the end from the beginning. In this world of instant gratification and a whole lifetime of research in a one hour TV show, it is important to understand that research includes the word search and sometimes it just takes a head-on search, page-by-page and completely through the pile of documents or the rolls of microfilm.
Posted by James Tanner at 9:34 PM