In previous posts, I have been relating the story of my attempts to locate an obscure historical location known as Kerlin's Well. Beginning in 1857, Lieutenant Edward Fitzgerald Beale, an Army officer, was given the task of constructing a wagon road from Ft. Smith, Arkansas to Los Angeles, California. Although the wagon road that was constructed is all but forgotten in U.S. history, the route Beale took in this mammoth undertaking is memorialized by the Atchison, Topeka and Santa Fe Railroad, historic U.S. Route 66,and now, I-40. From the perspective of my own family, the Beale Wagon Road was traveled by my Great-grandfather Henry Martin Tanner in coming to Arizona to settle along the Little Colorado River.

In 1877, Henry Martin Tanner and his new wife, Eliza Ellen Parkinson Tanner traveled by wagon from Beaver, Beaver County, Utah down to St. George, Washington County, Utah, then across the Colorado at Pearce's Ferry and across northern Arizona finally stopping at a place called Allen's Camp, now Joseph City, Arizona. As they stopped along the way, they found a dependable source of water at a place called Kerlin's Well, named after one of Edward Beale's workmen.

In my earlier posts, I told of my month's long effort to find the location of this elusive historical site, culminating in my contact with Jack Beale Smith, the author of a small volume of history about Kerlin's Well. I was now certain about the location, but I had my investigations confirmed, when one of my associates at work showed me that the video of the boy standing next to the rock was part of the GeoCache movement and that the GeoCache also had the exact coordinates. Armed with this new information, we planned to drive to Kerlin's Well over Memorial Day.

We left Mesa early Monday morning and drove north on I-17 turning to Prescott and then on north to Chino Valley where we stopped for breakfast at McDonald's. This was to be a tourist class trip. We continued on to Ashfork and then west to Seligman. The road into the barren desert is extremely rough. During our entire trip, once we left the paved road, we did not see another person our entire trip.

It was relatively easy to follow the topographical map in theory, but much harder in practice. We soon discovered that not all of the roads we could see on the ground were on the map. We could see three different routes that would lead to our destination at the Well. The first route was very elusive. We could not find the turn-off at all. We found the second road but soon encountered a section that was too steep and too rocky for our truck to negotiate. I drive a two-wheeled drive pickup truck. I have always figured, an rightly so, that I could get anywhere I really needed to go with two-wheel drive and if I couldn't get there with two-wheel drive, I probably would get in trouble with four-wheel drive. I know there are four-wheelers out there who are probably laughing right now, but I also have plenty of experience with stuck in the sand or mud four-wheel drive vehicles. Let's just say that the roads only got worse. 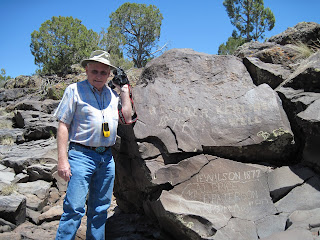 After two false starts where we had to turn around and go back and start over, we finally hit the right combination and found the water tank we were looking for near the Kerlin's Well. After a short cross-country hike, we discovered the narrow canyon and the famous rock.

More about Kerlin's Well and our further discoveries in the next post.
Posted by James Tanner at 10:19 PM