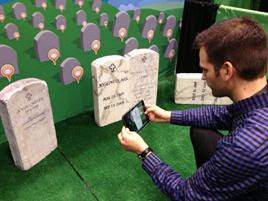 President of Otter Creek Holdings, announced it at MBNA's Industry show this weekend.

LegacyTec gives you access to all the information connected to a certain headstone based on a picture. All you do is take a picture of a headstone, and this technology will bring up information about that headstone from BillionGraves, Family Search, My Legacy Memorial and other sites. LegacyTec supersedes the QR codes you currently see on headstones by eliminating the need for them all together.
I struggled with the title of this post because the whole subject needs an explanation. The title of the news article is "Utah software company to release app it says changes genealogy research, makes QR Codes obsolete" from the Deseret News of 11 February 2013. The best explanation of what is happening involves understanding that the people who make headstones or gravemarkers have been selling products, including QR code or barcode links on their products allowing the family or friends of the deceased to create an online memorial linked by the code on the headstone. Here is the explanation from the news article of the new product:


Many gravestone makers, including a product owned by Otter Creek Holdings called mylegacymemorial.com, currently offer a service of attaching matrix barcodes to gravestones so family members or other passersby can scan the barcode from their smartphone onsite and be directed to an interactive memorial website page.

And although such monument pages have obvious advantages that make them nearly impossible to replace in the foreseeable future — families can personalize and edit those pages with their own photos, videos and stories — Otter Creek’s “Legacy Mobile” app opens the possibility for anyone to pull up a webpage of genealogy information on any gravesite in a cemetery.

The article goes on to describe the new product from


Instead of searching “a billion records at a time” the app first uses GPS metadata from uploaded photos to filter search results by location, usually by cemetery or city, Gunn told Deseret News in an interview from the Monument Builders of North America Full Industry Show in Ohio.

After the app drastically narrows the search to perhaps a couple hundred possible candidates in the area, a heavy mix of proprietary algorithms kick in and image recognition gears start to churn. Using optical character recognition, Gunn says the app compares the uploaded gravestone image and its text to an existing, and still growing, gallery of gravesite monument photos, especially from sites like the company’s recently acquired billiongraves.com, a site that took on a healthy 30,000 new users this past year.

But using geocode to grab a location and image recognition science to compare text and photos — both technologies that have been around for a few years — is only half of the app’s recipe. The other portion that could make it the next big thing is wrapped up in the number of personal contacts Devin Taylor, the company’s CEO, has initiated over the years in his effort to connect with more and more partners. After all, the app would be worthless without a mega-database to query for results.

Tying online information to older gravemarkers that do not have any sort-of QR code or bar code is a really interesting development. Watch for updates.
Posted by James Tanner at 6:53 AM