Initially, very few genealogy software programs were developed for the Apple operating systems and most of the programs were available only on Microsoft based computers. The arose a common belief among genealogists that good genealogy software was available only for Microsoft based machines. It is time to re-evaluate and discard that out-dated notion. The main reasons for this need to reevaluate is that the dichotomy between Apple and Microsoft is crumbling. The new kid on the block, Google, is making serious inroads in both the software and hardware areas of personal computing.

One way to tell what is happening is to look at websites such as analytics.usa.gov. Here is a screenshot of the current state of computer use by nearly 100,000 people on U.S. Government websites. 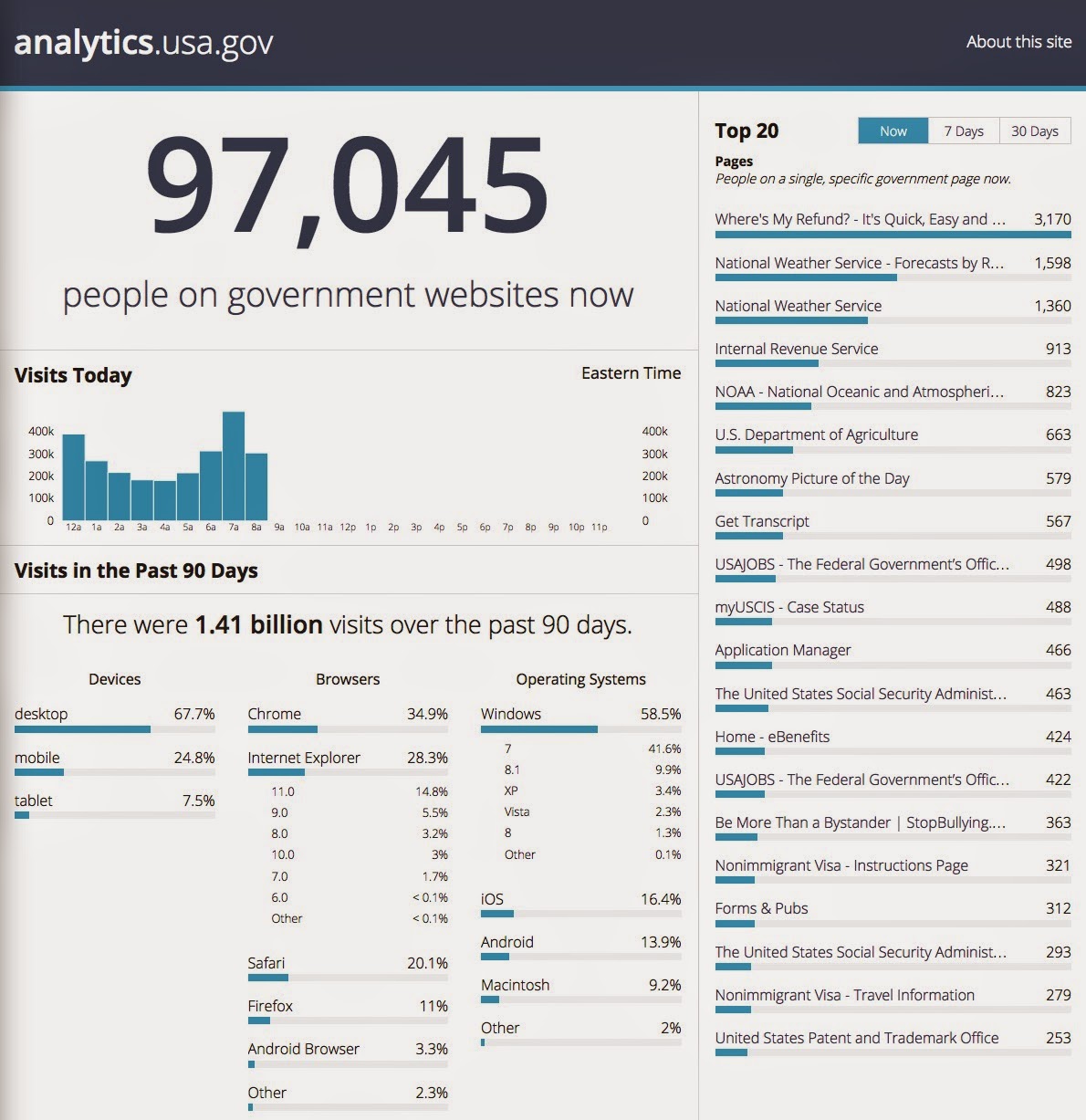 This website monitors usage in real time. Look at the browser usage. Google's Chrome is easily the most popular browser, with Internet Explorer and Safari right behind. Note that Internet Explorer (Microsoft) is fragmented into usage versions roughly corresponding to the usage of operating systems. More than half of the Windows operating system users are at least one full version back in their conversion to Windows 8. But note who is second; Apple with its iOS operating system. Mobile devices account for slightly more than 30% of the usage with the systems pretty evenly split between Apple's iOS and Google's Android.

Here's what was happening as I was writing this post. 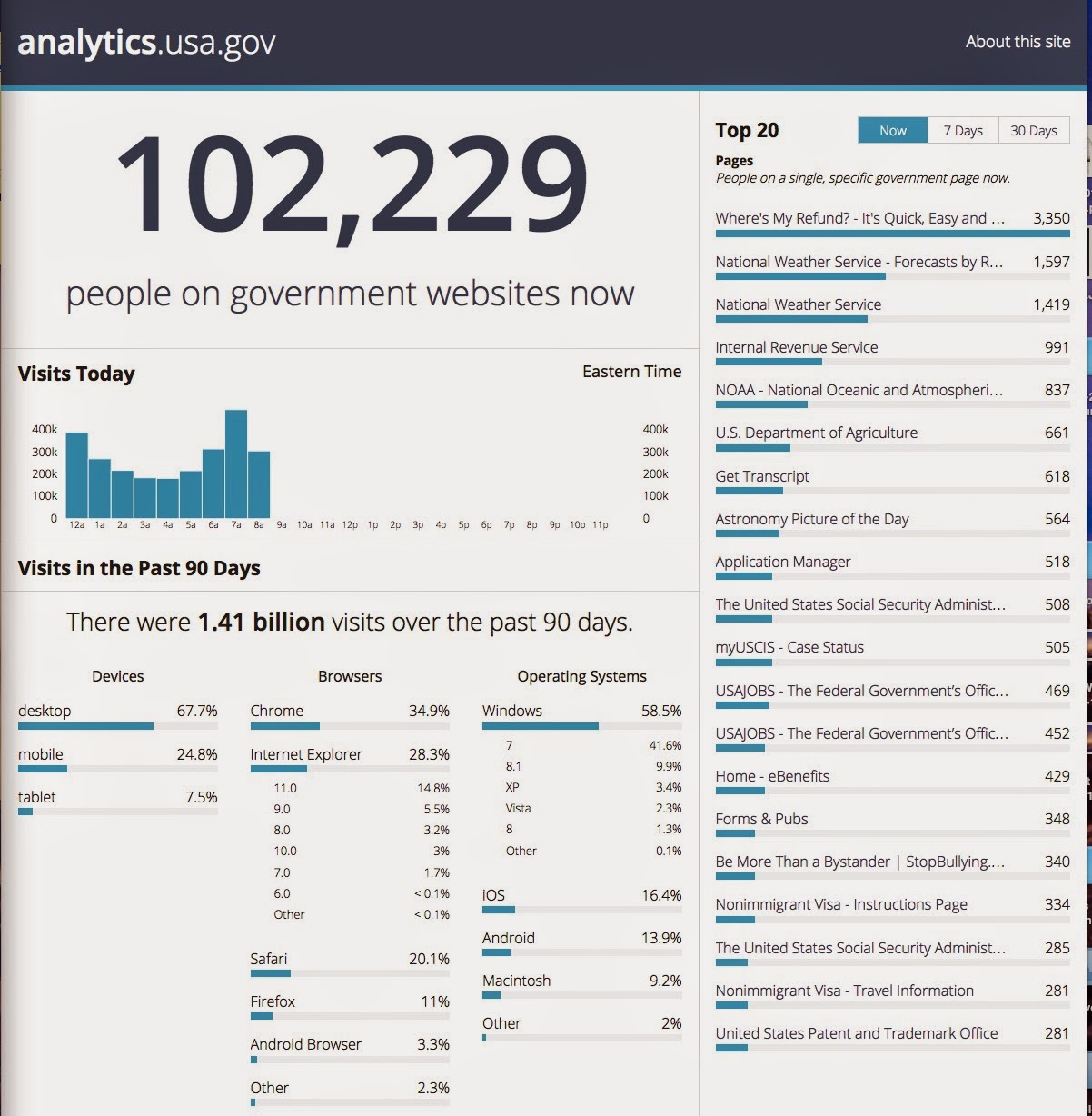 As the number of users rose, the percentages held pretty steady. There are some definite conclusions here.

1. The market is no longer a two-way battle between Apple and Microsoft. It is clear that Google is becoming a dominant participant.

2. The use of mobile devices is eroding the dominance of desktop computer.

3. Microsoft's fragmented market is an indication of the difficulty Microsoft is having in maintaining a dominant position. Even if Internet Explorer comes pre-installed on new PCs, people are shifting to Google's Chrome. Note that only 3% of the users have upgraded to Internet Explorer 10.0.

4. The use of mobile devices coupled with the usage of Windows 8 and 8.1 indicates that very few mobile device users depend on Microsoft's operating systems. This is supported by current sales figures of falling sales for desktop and notebook computers. See "Gartner Says Worldwide Traditional PC, Tablet, Ultramobile and Mobile Phone Shipments to Grow 4.2 Percent in 2014." 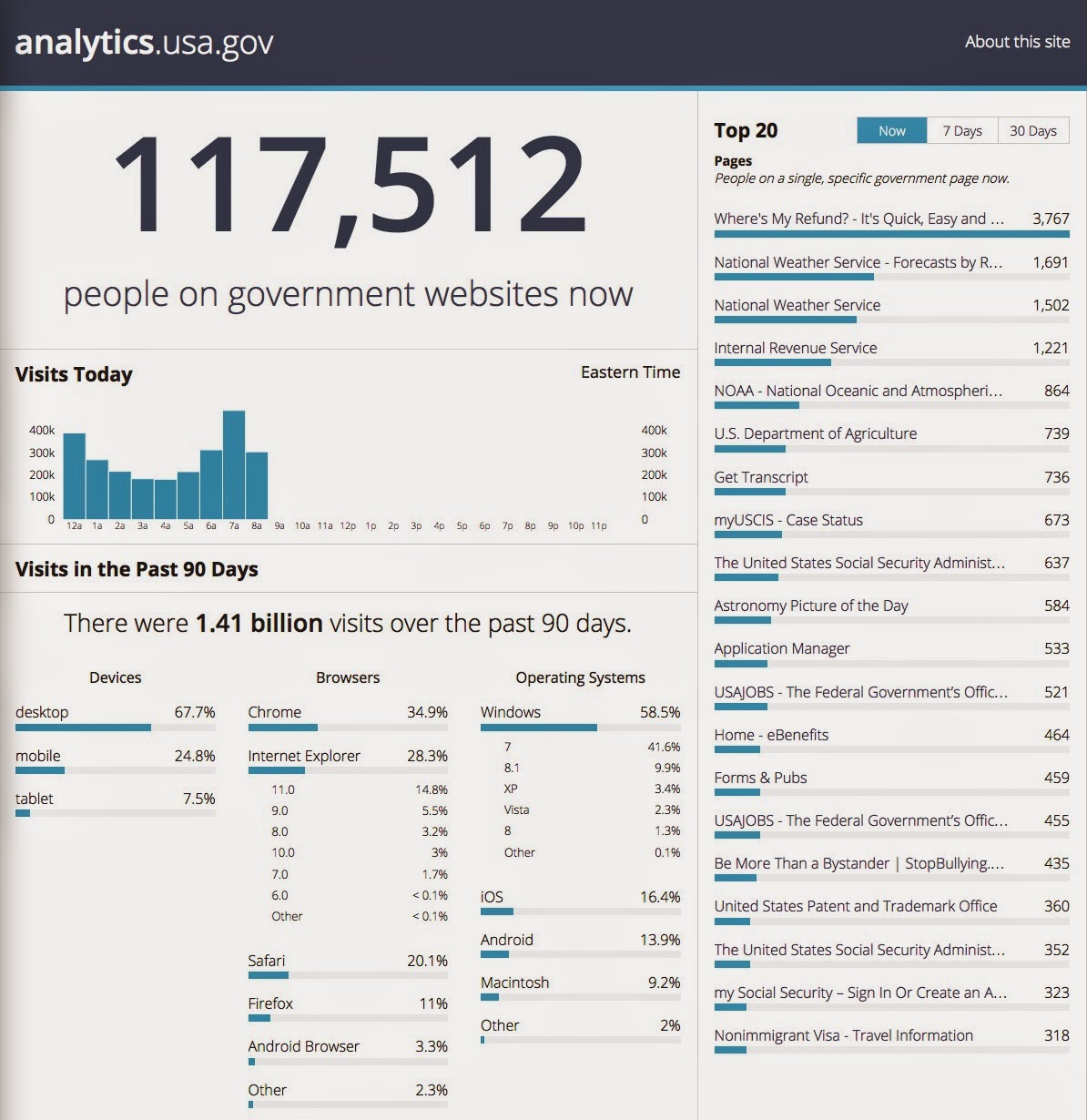 Here are the sales figures for operating systems from Gartner with projections for 2015. You can make your own conclusions, but it looks like to me that any program that fails to make a mobile application and an Apple iOs or OS X version is going to ultimately fail.


Worldwide Device Shipments by Operating System (Thousands of Units)
Posted by James Tanner at 6:20 AM

Email ThisBlogThis!Share to TwitterShare to FacebookShare to Pinterest
Labels: Computers