Veterans Records the Target of Reclaim The Records FOI Lawsuit 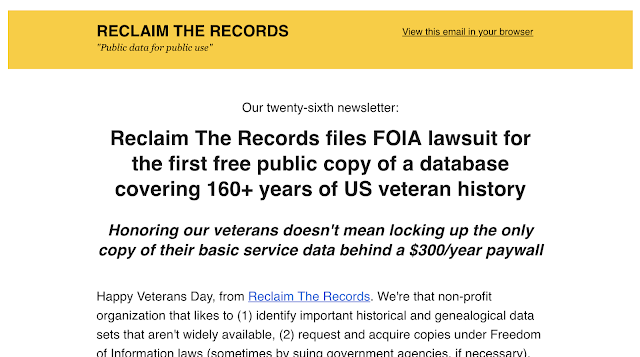 Here is a quote from Reclaim The Records about their most recent lawsuit to obtain publically available and free US records. I think the whole announcement has some interesting implications for genealogists so I am reproducing the entire statement with all the links.

"Happy Veterans Day, from Reclaim The Records. We're that non-profit organization that likes to (1) identify important historical and genealogical data sets that aren't widely available, (2) request and acquire copies under Freedom of Information laws (sometimes by suing government agencies, if necessary), and (3) publish it all online, for totally free public use, no strings attached. After all, our taxes already paid for the data; why should we have to pay yet again?"
"Today we're announcing that we've launched yet another lawsuit against a government agency that didn't want to turn over public data to the public. It's our very first federal-level Freedom of Information Act (FOIA) lawsuit, as opposed to the various state-level FOI laws we've been using since 2015."
"We're going after another government database that ought to be freely available to the public, but isn't. We're asking the US Department of Veterans Affairs to provide the first free public copy of the Beneficiary Identification Records Locator Subsystem (BIRLS) Death File."
"This database contains basic information on about fourteen million deceased American veterans who served in the US military and then later received benefits from the VA, such as healthcare or the GI Bill, between approximately 1850-2017. Each record includes the veteran's dates of birth and death, dates of enlistment and release, and branch of service. Some years have a little more information available than others, including the veteran's basic cause of death (i.e. natural or combat-related), gender, and possibly other fields."
"This database is a boon not only to genealogists researching our family members' military service, but also to historians, sociologists, health care researchers, and many other groups. Everyone listed in the database is deceased, so the privacy concerns are minimal. But the information is currently not available on any free website, not even through the main US government open data portal, data.gov. It's not searchable, and certainly not downloadable."
"Instead, there's only one place on the whole Internet that has access to this important information about American veterans: Ancestry.com. (Well, and Fold3.com, but that website is now owned by Ancestry, like so much of the genealogy world these days.) And when we asked the VA for a copy of the BIRLS file, they replied that even though they agreed that they had provided a copy to Ancestry a few years ago, the VA didn't want to provide a copy to us, too."
"It's so weird how that "preferential treatment" thing keeps happening, right? ¯\_(ツ)_/¯"
And so, in a move that will likely not surprise anybody, we sued the government to get the records. We filed Reclaim the Records et al v. United States Department of Veterans Affairs in US District Court, Southern District of New York, on September 17, 2018. It's case number 18-CV-8449, if you want to follow along from home through PACER."
"And you can read the whole story on our website, including the text of our original FOIA request, and copies of all our letters to and from the VA, and all the legal filings. We also used the RECAP web browser plugin to upload free copies from PACER to the RECAP archive."
"Three weeks later, on October 10, 2018, the VA suddenly responded to our attorney, but not in a formal lawsuit response. They instead produced a letterthat was conveniently dated (backdated?) September 13, 2018, which was four days before our lawsuit had been filed. No explanation was given by the VA as to why they had not produced this letter prior to our suing them.

"
"This letter says that the VA had suddenly remanded our request to their FOIA Officer for "further consideration, appropriate processing, and the issuance of a subsequent IAD".

"
"And that sounds promising. So...stay tuned."
"In the meantime, in case you missed it, check out a recent in-depth new article from the senior editor at BuzzFeed News (and fellow genealogy nerd) Katie Notopoulos, covering our Freedom of Information lawsuit against the New York State Department of Health.
(Well, one of our lawsuits against the New York State Department of Health, anyway; we actually have two lawsuits running against that agency right now. But that's a story for another time...)"
"We'll just close by saying that if you support our work to bring public records back to the public, we would really appreciate your financial support, too. We want to fight more government agencies for the return of more public records, but we need your help to do that. We're a 501(c)(3) non-profit organization, and it's public donations that fund our work and our lawsuits, not expensive annual subscriptions to websites that sell you back your own data."