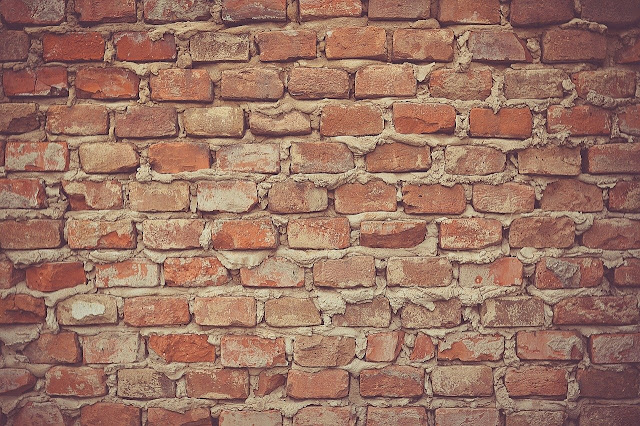 As I have written and presented previously, the concept of a "brick wall" in genealogical research is not very helpful. Here is a video I did a couple of years ago about how to resolve the problem.
The Ultimate Genealogical Brick Wall Buster
But there is always more that can be said on this subject. In this post, I am going to try to identify the type of situations that cannot be classified as "brick walls" for a variety of reasons. Unfortunately, there is no consistent and universally accepted definition for what is and what is not a brick wall. But from having fielded a lot of questions about brick walls, I have formed an opinion about what does and what does not fall into that category. The reason for doing this is to help you make progress on those lines that you have wrongly classified as brick walls.
The main reason I don't feel that using the term "brick wall" to describe a situation where genealogical research has become difficult is that there is a confusion between difficult research situations and those that are impossible. We all have to start at the same zero-level of experience in acquiring research skills and since the level of the perceived difficulty of any particular research situation is dependent on the background and experience of the researcher, the definition of what constitutes a brick wall for any given researcher changes over time as skills are acquired. For example, I might have a high skill level in doing genealogical research in the English language but close to a zero skill level in a language such as Chinese. Ultimately, progress is Chinese genealogical research depends on being able to understand and read the language. If I had a Chinese ancestor, that would be my brick wall but if I learned how to read Chinese and learned about Chinese records, I might find that my initial "brick wall" was rather easily overcome.
My Chinese language example is also an example of why you might want to find some help from other genealogists with the particular skills that prevent you from making progress with your research. So a lack of experience or knowledge on the part of the researcher cannot be called a brick wall. The researcher can choose whether or not they want to make the effort to learn what it is they need to know to make progress on a particular ancestral line, including learning a new language or script.
One thing I have noticed from all the questions about brick walls is that the vast majority of the issues involve ancestors back in or before the 18th Century. There is a direct relationship between researching back in time and the increasing difficulty in finding records especially for people who were neither rich nor famous. Characterizing research before 1700 as a "brick wall" is neither realistic nor productive. Research usually requires learning new scripts and even a new language. At the same time, the records that do exist are more difficult to access and search and the records often require page by page and line by line review. The fact that you cannot find an individual in this increasingly difficult time period may simply mean that there are no records for that individual. If you need a good example of the difficulty, look at the following book.
Anderson, Robert Charles. 2015. The great migration directory: immigrants to New England, 1620-1640 : a concise compendium.
From time to time, people come to me with questions about an ancestor or relative that lived well within the 19th or 20th Century and preface their questions with the comment that this person is a brick wall. If you watch my video above, you will hear me say something about the fact that almost all these issues end up being related to looking in the wrong place. On the other hand, people do disappear without a trace. Some to escape from a bad situation others simply because during the 1800s especially, life was difficult and people died in places where their bodies were never found. Compound this with the fact that some people changed their names and never looked back along with spotty record-keeping and you have a lot of reasons why finding a particular person may never be resolved. We should not consider these people to be a brick wall case until we have done as much research as possible for all the related people we can find.
By the way, a missing record for a birth, marriage, or death is never a brick wall. There are plenty of reasons why one vital record may not be found. You need to remember Rule Two of the Basic Rules of Genealogy: Absence of an obituary or death record does not mean the person is still alive. See A New Rule of Genealogy Discovered: Number Thirteen.
If you feel like you simply cannot find anything about a particular person or family, just take a deep breath and take a few generations back on that family line and work back up towards the brick wall person. I have ancestors I have been researching for over thirty years and I still do not consider them to be a brick wall because I still think there are sources of information I have not yet found.
Posted by James Tanner at 5:08 PM