You Can Read Handwritten Documents! -- How to begin, Post #1 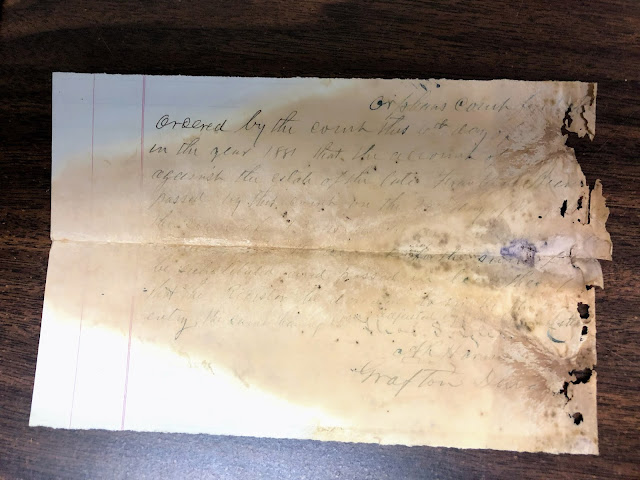 The first and most persistent challenges for those who undertake genealogical research are handwritten documents. I have been deciphering handwritten documents since I learned how to read in the first and second grades. After nearly forty years of doing genealogical research, I have learned to read the handwriting from many time periods and from many countries. After years of helping people read handwritten documents, I realized that I should share what I have learned. This post is the first in an unstructured series of regular posts about handwriting. I will show samples of difficult handwriting and discuss the ways to decipher what has been written. Along the way, I will also discuss the issues of teaching handwriting in the schools in the United States and recommend resources for learning more about handwriting. As I continue with this continuing series, I will welcome any and all examples you might want me to consider. You can send examples to genealogyarizona@gmail.com.

Once you learn how to read, the style and form of the individual printed letters become internalized and you stop being aware of them almost completely. The opposite occurs when you begin the process of trying to read a handwritten document. You are immediately confronted with not only the individualized form of the letters but also the skill of the person who wrote the document. In addition, because genealogists work with historical documents, we are also faced with the condition of the original document such as the one shown above.

Genealogists are faced with handwriting challenges almost immediately upon starting any research project. For example, the U.S. Federal Census was handwritten from the first census in 1790 until much of the census was computerized in the 2020 census. As less and less emphasis is placed on learning handwriting in the United States, it is entirely possible that within a short time, the average person will not be able to read any handwritten documents. I am now finding many teenagers and older whose ability to read cursive is extremely limited.

The study of old handwriting is called Palaeography. If you are interested, the Institute of Historical Research of the School of Advanced Study from the University of London offers a free course in Palaeography. Brigham Young University has a free script tutorial covering documents in English, German, Dutch, Spanish, Portuguese, Latin, French, and Italian.

Generally speaking, most genealogists are not going to be working with documents considered by palaeographers but any knowledge that helps genealogical research is valuable.

Just a brief note about bad handwriting. Starting with records from your immediate family, you may be confronted with really poor handwriting skills as I mentioned above. If this is the case, the only real solution is to try to obtain enough of the person's handwriting to begin to analyze the content and understand the parts that do not appear to be legible. The basic tactic for resolving handwriting challenges involved repeated study and review. I will write about this several times in the future. If you want to get started with an overview, see the following webinar.