Finding Your Ancestors using Death and Cemetery Records -- Part One: Lost and no recovery 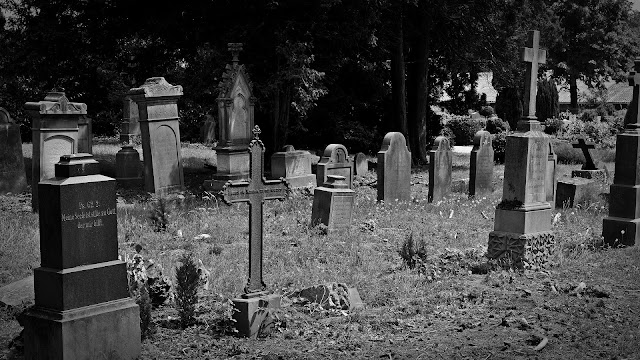 Death and cemetery records go way beyond death certificates and grave marker inscriptions. To begin to understand all of these genealogically valuable records we need to focus on what happens and what records are created when a person goes missing or dies. Of course, the records that are generated from the time of death until final burial or cremation vary considerably according to the circumstances of the death.

It is not unusual for genealogists to fail to find a death and/or burial date for an ancestor or relative. In the United States, death certificates are a fairly recent innovation. Some states did not uniformly create death certificates until well into the 1900s. In England, burial records created by the Church of England are fairly common but death dates are hard to find. From looking at thousands of entries in the FamilySearch.org Family Tree, I can say that finding a death record is hit or miss with huge numbers of entries simply recording that the person was "deceased." I am sure that many but not all of these missing death and burial dates could be identified with a broader search. This series of posts will examine a broad spectrum of death and cemetery records.

Let's start with those who are lost at sea.

For example, here is a website created by the City of Gloucester, Massachusetts.

Here is a description of the contents of this archive from the website.

We have compiled a list of fishermen lost at sea and other drownings based on the work done by Roberta Sheedy for the Memorial Plaques at the Fisherman’s Statue on the Boulevard at Gloucester Harbor. This list has been expanded and updated, and no longer is restricted only to fishermen from Gloucester or on a Gloucester boat. It now includes not only those Gloucester people lost at sea while fishing, but any death by drowning, whether at sea, in the Harbor, or rivers or lakes, and also deaths of fishermen on shore if their death was caused at sea. Therefore, while there were no women on the original list, there are some on this list. There are also children and vacationers, engineers and dockworkers – anyone who we felt should be included. A cross-hatch (#) after the name indicates that the person had no connection at all with a death by fishing or drowning in the sea.

This list is unavoidably incomplete – we will probably never recover the names of all the Gloucester people who have been lost at sea. Any additions or questions should be sent to the Archives Committee.

If an ancestor died and the body was never found, you may need to search contemporary accounts of the efforts used to recover the body. The best sources are newspaper accounts of the missing person. Likewise, if a person is lost and then the body is recovered, those recovery efforts may also have been reported in a newspaper.

I have many ancestors and relatives who "crossed the Plains" to Salt Lake City, Utah as pioneers (people who arrived in Utah between 1847 and 1868). Among those ancestors are some who died on the journey. The current number of pioneers who died stands at about 4,600. See "Do we know how many Latter-day Saints died between 1846 and 1869 in the migration to the Salt Lake Valley?" For some of these people, we have no place of death and others cannot be identified at all.

Stay tuned for more about death and cemetery records.