Analyzing a Complex Challenge on the FamilySearch Family Tree: Part One 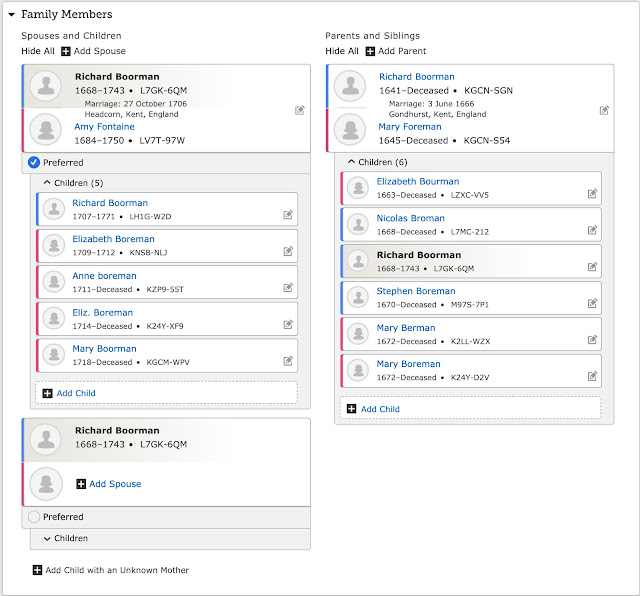 This screenshot shows just the tip of the iceberg that is waiting for anyone who started to really dig into research for this Boorman family. I thought it might be helpful to some researchers, especially those who work with extensive families on the FamilySearch Family Tree to see some of the methodology when we are faced with difficult and tangled family entries. Here is another screenshot showing one of the first levels of difficulty. 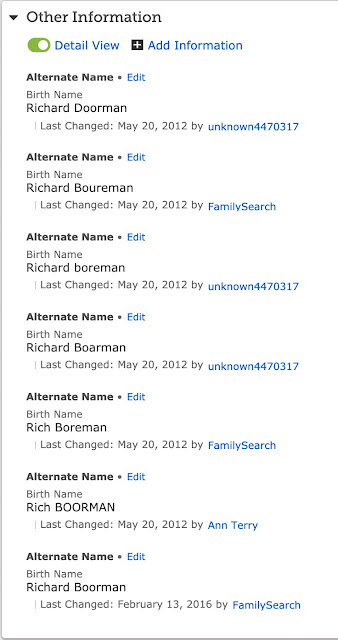 Before I make any further comments, I need to admit that there seems to be no way of reconciling the records that have been lumped together for this particular family. By the way, most of these entries have a substantial list of sources and you would expect that the records would be easily untangled. That would not be a valid expectation.

The very first steps to beginning to unravel the mess are to ascertain where the events in these ancestors' lives occurred and also, to resolved any duplicate or inappropriate entries. Although it might be tempting to jump right in and start making changes, I need to determine if I am even related to these people at all.

Fortunately, the Family Tree can show me how I might be related. Here is a screenshot of part of my relationship to Richard Boorman, (b. 1668, d. 1743). 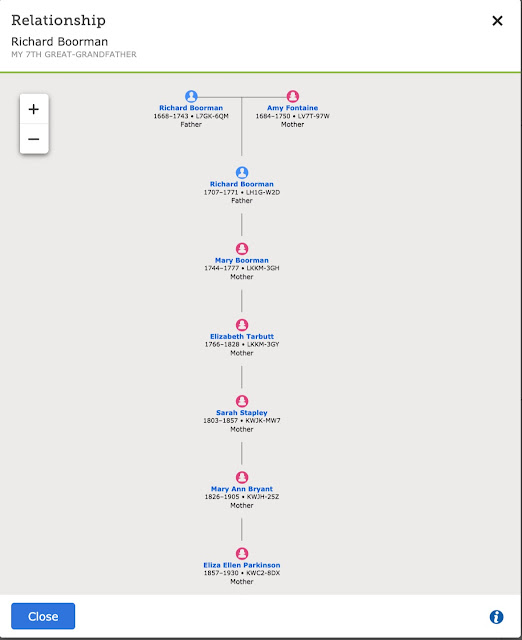 This abbreviated pedigree indicates that Richard Boorman, b. 1668, d. 1743 is a direct line ancestor. My research and the sources I have found give me confidence that I am related to Elizabeth Tarbutt (b. 1766, d. 1828) but I need to closely examine the source linking her to Mary Boorman. I find a christening record showing that Elizabeth Tarbutt is the daughter of William Tarbutt and Mary Tarbutt. 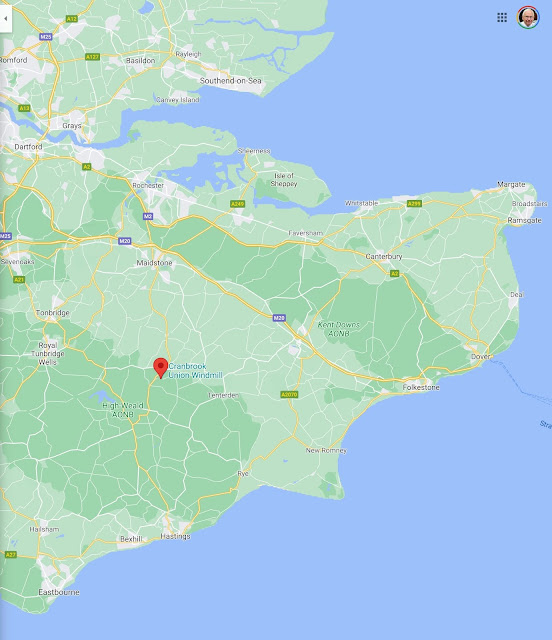 The dates for these first few events are in the mid-1700s so I need to be concerned when events start happening in places that were not readily available to someone on foot, on a horse, or riding in a wagon. Now I need to look at the sources showing the places where each of the children in the Elizabeth Tarbutt family was born. All four children were born in Rolvenden, Kent, England which turns out to be about 6 miles away from Cranbrook. You can use Google Maps to show the distance between these and other places.

Next, I look at Elizabeth Tarbutt's parents and siblings. Here is a screenshot of that family. 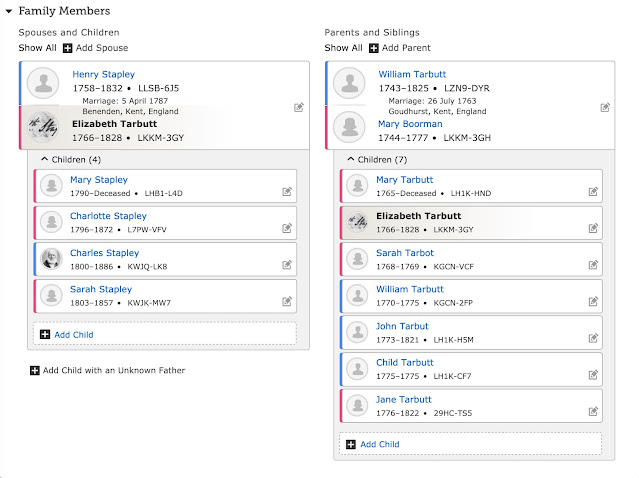 I checked the christening places for each child in the William Tarbut/Mary Boorman family and also look for a marriage record showing that these two people were married. All of the children were born in Cranbrook. It looks consistent to this point.
I now move on to William Tarbutt and Mary Boorman. Because I am ultimately going to be working on the Boorman line, this is where I need to know if there are source-supported conclusions about the parent/child relationship in each succeeding generation. First, a quick check to see if there is support for the marriage of William Tarbutt and Mary Boorman. There are several marriage records showing a marriage in Goudhurst, Kent, England on 5 June 1763. I also check to see if the marriage dates and death dates that are recorded are consistent with the dates of birth for each child. I am also watching for duplicates.
The marriage is Goudhurst, Kent, England immediately raises some issues. Where is Goudhurst located from Cranbrook? The Family Tree 38 source listed have no place recorded for William Tarbutt's christening or the date enntered of 17 February 1739. There is also a second marriage on 11 May 1778 to Elizabeth Balcomb. All the children live and die in Cranbrook except one who dies in Rolvenden, a few miles away. There is a death record for William Tarbutt in 1825 in Cranbrook.
What about the marriage in Goudhurst? There are records supporting this location and date and Goudhurst is only about 5 miles away from Cranbrook.
In addition, I have new location. Mary Boorman is entered as being born in Headcorn, Kent, England. Where is Headcorn, Kent? It is located about seven miles away from Cranbrook. This is still within the limits of what can be expected but begins to raise some issues.
Now it is time to move backward one more generation. Mary Boorman's parents are listed as Richard Boorman (b. 1707, d. 1771) and Mary Parks (b. 1717, d. 1777). Richard is listed as christened in Kent, England which is the same as saying that we don't know where he was born or christened. But now it gets interesting. Richard is entered as being buried in Headcorn, Kent, England in 1771 and all of the children in this family are christened in Headcorn.
Up to this point, everything entered into the Family Tree seems to be supported by both sources and reason. The next generation is where the mess begins. Here is the next generation's Richard Boorman (1668, d.1743)  married to Amy Fontaine (b. 1684, d. 1750). This is where we start into the problems. Here is a screenshot of this family. 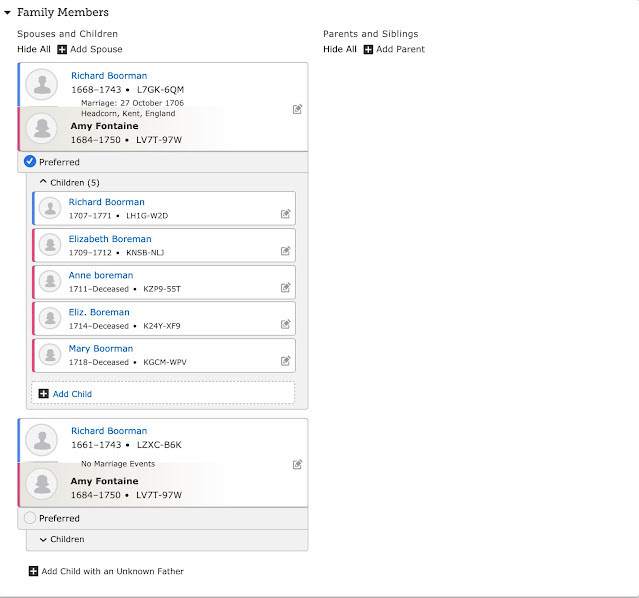 This immediately looks like a duplicate entry but the christening dates are not the same. Now we begin seeing more than one Richard Boorman in the same area at the same time. Here is where the challenge begins. This is a screenshot of a search on Findmypast.com for Richard Boorman (b. 1707, d. 1771). 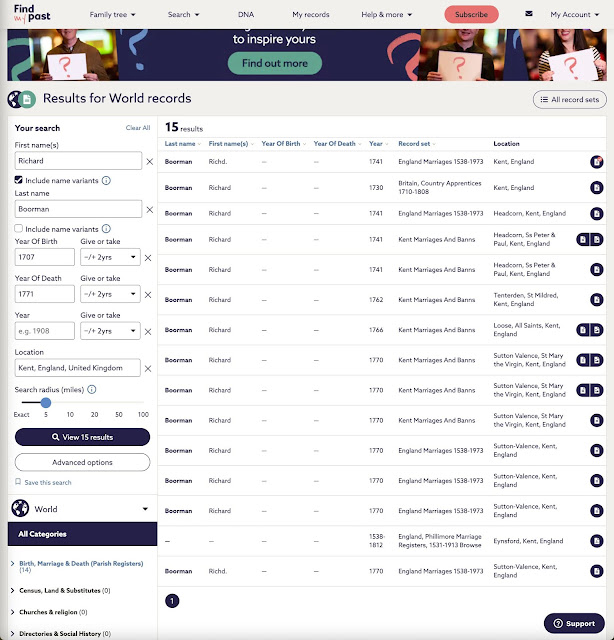 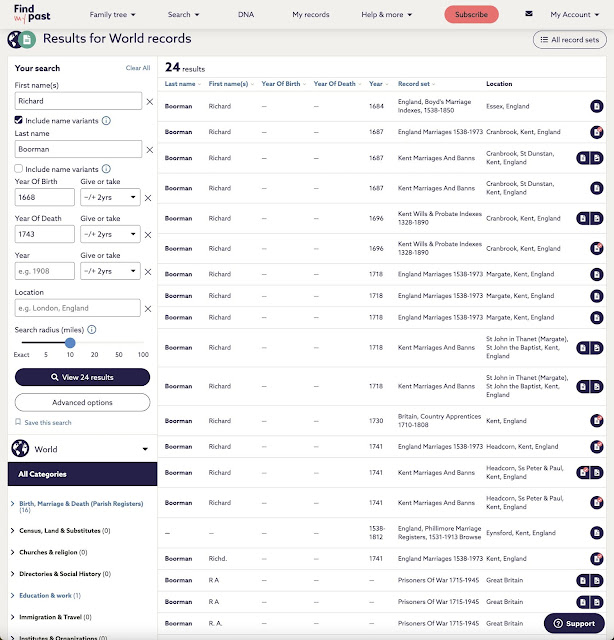 Once you start looking beyond what is recorded in the Family Tree. What seem to be supported entries become a puzzle.