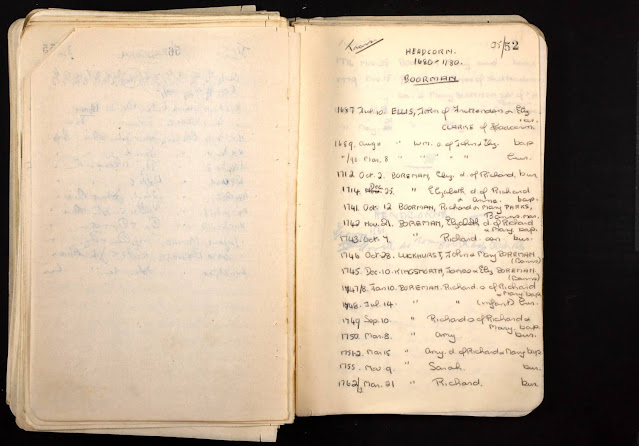 In the last post in this series, I had just discovered a transcript of the parish register for Headcorn, Kent, England from 1680 to 1780. Here is a transcript of the transcript.
Kent, England, Tyler Index to Parish Registers, 1538-1874 for Richard Boorman (two pages)
Trans? 35/52
Headcorn 1680 -1780
1687 Jul. 10. Ellis, John of Frittenden and Eliz Clarke of Headcorn [Frittenden is appx. 2.7 miles from Headcorn]
1689 Aug 11 Ellis, Wm O. of John and Eliz. Bap
1689/90 Mar. 8 Ellis, Wm O. of John and Eliz. Bur
1712 Oct. 2. Boreman, Eliz. D. of Richard. Bur
1714 Nov Dec. 25 Boreman, Elizabeth d of Richard and Anne Bap
1741 Oct. 12 Boorman, Richard and Mary Parks, Banns Mar.
1742 Nov. 21. Boreman, Elizabeth d. of Richard and Mary bap.
1743 Oct. 7. Boreman, Richard son bur.
1746 Oct. 28. Luckhurst T. John and Mary Boreman (Banns)
1745 Dec. 10. Kingsnorth, James and Eliz Boreman (Banns)
1747/8 Jan 10. Boreman Richard s of Richard and Mary bap
1748 Jul. 14. Boreman. Richard s of Richard and Mary (infant) bur
1749 Sep. 10. Boreman, Richard s of Richard and Mary bap. bur. [?]
1750 Mar. 8. Boreman Amy
1751-2 Mar 15 Boreman Amy d. of Richard and Mary bap
1755 Nov 9 Boreman Sarah bur.
1762/3 Mar. 21 Boreman Richard bur.
Page two
Trans 35/53
1776 Nov. 25 Boorman. Mary wid. Bur.
1779 Nov. 15 Boorman. James of Frittenden ban with Mary Southon spr of r.p. Banns
1780 Apl 9 7 Boorman Thomas infant bur.
1780 May 25 Boorman Eliz. bur.
Headcorne
From 1561
Gullam Doville d Toms Douvill bap 13 Oct 1566
Additional Boreman/Boorman names from additional docs
1771 Dec 10. Borman old bur
1723 May 3 Boreman Benj s Will bur [?]
1718 May 4 Boreman Mary d Richard and Amy bap bo Mar 3
One of the last questions I had raised concerned the existence of a source supported relationship of Richard Boorman LH1G-W2D to his father Richard Boorman L7GK-6QM as listed in the FamilySearch.org Family Tree. The son has the christening date of 7 September 1707 without a place listed. The earliest dates on the above transcript do not record Boorman family members and the first Boorman family dates from 1712 as a burial of Elizabeth Boorman (b. 1709, d. 1712) KNSB-NLJ who is the second child listed of Richard Boorman L7GK-6QM and Amy Fountaine LV7T-97W but the entry above has a wife named Anne not Amy.
For reference here are the eight Richard Boorman individuals who are shown to be related on the Family Tree. I have added the name of each of their spouses if one is recorded. I have also arranged them in reverse chronological order by christening date.
Here we see where there is a major question. The father of Richard Boorman LH1G-W2D is listed in the Family Tree as being christened in Goudhurst, Kent, England and married to Amy Fountaine but there is no one named Richard married to an Amy on the Headcorn list above. There are three, possibly four, Richard Boremans listed as being buried in Headcorn. The earliest Boorman burial is October 7, 1743. However, the Richard Boorman listed above who died in 1743 was from Goudhurst and there is no real reason to believe that he died in Headcorn. So, the question resolves as to whether or not there was a Richard Boorman who married and/or lived in Headcorn married to Amy Fountaine. So now I am off to research the parish registers. Guess what? Two more Richard Boormans.
Richard Boorman (C. 1661, d. 1743) LZXC-B6K Christened 19 November 1661 in Goudhurst, Kent, England married to Mary Atkins
Richard Boorman GCHS-P5W no christening or death date, no marriage listed
There are no sources listed for either of these "new" Richard Boormans. But there was a duplicate listed which gives me yet another Richard Boorman.
Richard Boorman (C. 1690, d. Deceased) Christened 12 Oct 1690 in Cranbrook, Kent, England no spouse shown
That brings the total up to 11 Richard Boormans all living in the same area and supposedly related.
It is time to start a spreadsheet and see which of these people really were my ancestors. Stay tuned. This is just now getting interesting.
Here are the previous posts in this series:
Part One: https://genealogysstar.blogspot.com/2021/07/analyzing-complex-challenge-on.html
Part Two: https://genealogysstar.blogspot.com/2021/07/analyzing-complex-challenge-on_9.html
Part Three: https://genealogysstar.blogspot.com/2021/07/analyzing-complex-challenge-on_10.html
Posted by James Tanner at 6:01 PM