Image from PublicDomainPictures from Pixabay

You might want to read these posts in sequence. They will make more sense that way. Although you are welcome to jump in wherever you want to start. This series might go on for a while. In starting this analysis, I had no idea if the apparent issues could be solved. I still don't.

Let's go back to the original image from the FamilySearch.org Family Tree of the Richard Boorman (b. 1668, d. 1743) and see what can be done immediately. 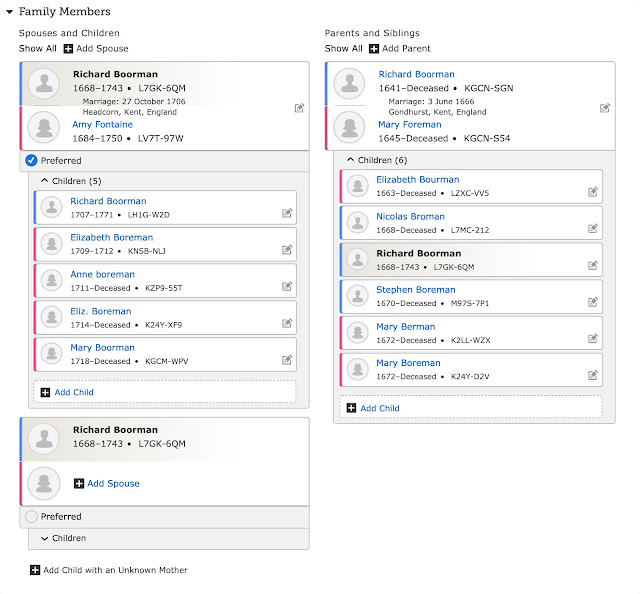 From the dates in the Family Tree, it looks like his wife, Amy Fontaine (b. 1684, d. 1750) outlived him so there is no reason to suspect that there was a second marriage with two children. In England in the 1600s and 1700s divorce was practically unknown. Here is a screenshot of the supposed second marriage. 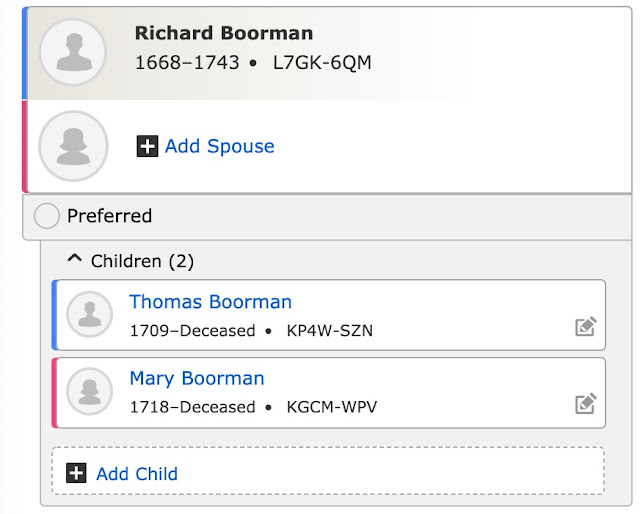 Mary Boorman KGCM-WPV is duplicated in the first marriage listed and so she supposedly has a known mother. Upon checking the sources it is even more apparent that she is a duplicate because there is a record of her christening in a consistent place, date, and with the same parents' names. 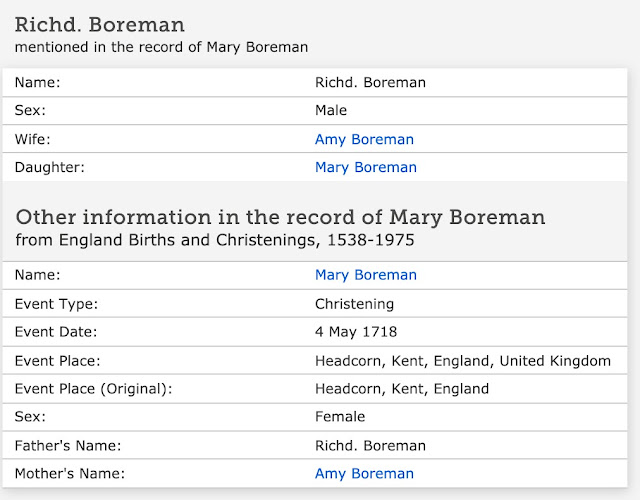 The process to correct this in the Family Tree involves detaching the child from these parents. She is not the child of this father with an unknown mother. Detaching her from this family will not affect the entry in the first list of children. But that leaves the second, older child who is named Thomas Booman b. abt 1709 in Goudhurst, Kent, England. I have detached the duplicate daughter. Always check the ID numbers to make sure you are identifying duplicates or apparent duplicates. This is not the same as a merge because the entries have the same ID number.

That still leaves Thomas Boorman KP4W-SZN as a child with Richard Boorman as the father. However, Thomas's birthdate is recorded as about 1709 and there is already a child in the family born in that year. Twins do exist but normally you would see some notation on a birth record. There is a birth record for Elizabeth Boorman KNSB-NLJ. 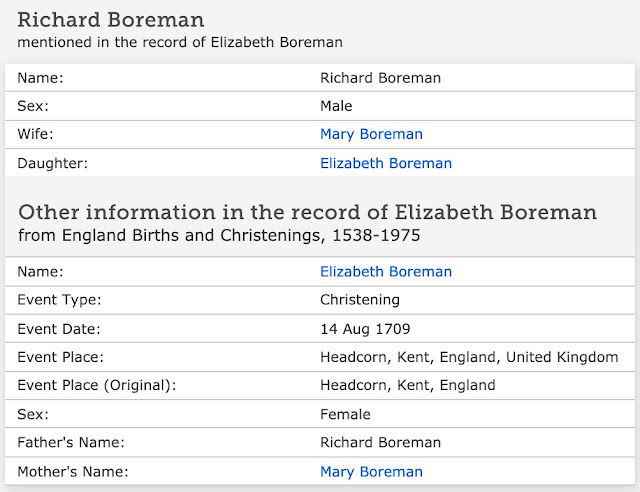 But there is no record attached (so far) for a Thomas Boorman. With records in the 1600s and early 1700s, it is not uncommon to have only a partial record of an individual. The main issue here is that the entry in the Family Tree indicates that Thomas is the only child listed that was not christened in Headcorn, Kent, England which also raises a question if Thomas is actually a member of this family. It is interesting that the father, Richard Boorman's parents were married in Goudhurst (although misspelled), Kent, England but the father, Richard Booman L7GK-6QM is the only one identified without a specific birth record.

So what do I do with Thomas Boorman KP4W-SZN? There are two strikes against him being a member of this family. He is said to have been born in Goudhurst rather than Headcorn like the rest of the children in the family and there is already a daughter, Elizabeth KNSB-NLJ christened 14 August 109 with a supporting record in the sources. Time to do some research. A quick check on Findmypast.com shows 132 results. There is not one person with a christening record named Thomas within 10 miles of Headcorn or Goudhurst (which by the way is actually Goud Hurst on Findmypast.com). Without a christening record, it is unlikely that Thomas Boorman can be accurately identified. Goudhurst, by the way, is a small town with a present population of about 3200 people.

Since there are no sources supporting a child named Thomas in the Richard Boorman/Amy Fountain and another child with the same year of birth and there are evenly spaces children in this family, I conclude that Thomas Boorman KP4W-SZN is not a child in this family but I am going to leave him in the Family Tree for a while to see what happens.

Without making any more changes we have five people named Richard Boorman. As shown by this list:

Theoretically, there could be a father/son relationship going on here but one of the Richards does not have an accurate  christening record that only identifies Kent as the place.

I am suspicious of the move from Goudhurst to Headcorn.