A Personal History of RootsTech 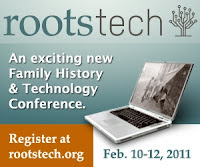 2011 was the first official RootsTech conference with that name. This original conference was attended by only 3000 people. You can contrast that by the virtual attendance in 2021 of well over a million people online.

This post is some of my comments about RootsTech from the very first one up to the two I have attended online, the 2018 conference while I was on a FamilySearch mission in Annapolis, Maryland, the virtual 2020 conference, and the last in-person conference in 2020. During the past year, the Brigham Young University Family History Conference, usually in July, was cancelled in 2021 as was the Brigham Young University Family History Technology Conference usually held just before RootsTech.

I may have written about this before, but here it goes again if that is case. When I started doing family history (genealogy) research now about forty years ago, I had no idea that people got together to talk about genealogy. No one in my immediate family was at all interested in genealogy although two of my great-grandmothers had been extensively involved and I was assured that all the work had been done for my family. Additional evidence of the competed nature of my genealogy was a row of books about my ancestral family, mostly the Tanner and Jarvis families. My initial efforts involved many trips to the Salt Lake City, Family History Library and learning a succession of initially primitive computer genealogy programs.

I think my first conference experience was when I went to a Family History Expos conference in Mesa in 2008. By that time, I was taking genealogy classes from BYU and shortly after that began working in the Mesa, Arizona Multi-Stake Family History Center (later the Mesa FamilySearch Library). By the time RootsTech became a possibility, I was also busily writing a genealogy blog called Genealogy's Star (a name I have always regretted) which also began in 2008. By this time, I had been heavily involved in genealogical research for about twenty-six years.

As a result of the blog posts on Genealogy's Star, I was invited to attend the first RootsTech Conference in 2011 as a blogger. There are still a very few of us still around from that first group. A trek to RootsTech became an annual tradition and being a RootsTech blogger, then Ambasador, now Influencer also became a tradition. I have been involved either in person or online every year since that first conference. Actually, I think I liked the first conference the best because everything was new.

Over the years, RootsTech has become something my wife and I live with for much of the year. I used to spend a lot of time preparing and presenting classes, but then I realized I was talking to more people my mingling with the participants and talking to people individually than I was as a presenter. Although, I still teach classes, I have also moved to producing videos on a weekly basis and my main focus has changed to helping people individually begin their genealogy experience or helping those with complex problems involving research. I like the new online venue for RootsTech because I think it is more inclusive. When a million people can participate to some extent, this has to be weighed against having only a few thousand participants. There is always the argument about the benefit of in-person contact, but only a few of the activities at an in-person conference deal with the real issues of doing genealogical research and building a family tree. There is also the cost of attending in person. That puts a limit on the participation that may not be defensible given the opportunity to attend online.

When I interact and teach people online one-on-one, I can see what they are doing and they can see how I find records and where the resources are located. This part is missing from in-person classes.

What will happen in the future? I hope the huge collection of resources that came from the 2021 RootsTech Conference will continue to be available. I also hope that in the future, the collection of video presentations from RootsTech will be organized and available a a vast reference library for genealogy. This is how I view the value of RootsTech today.