Is this family history or even history at all? 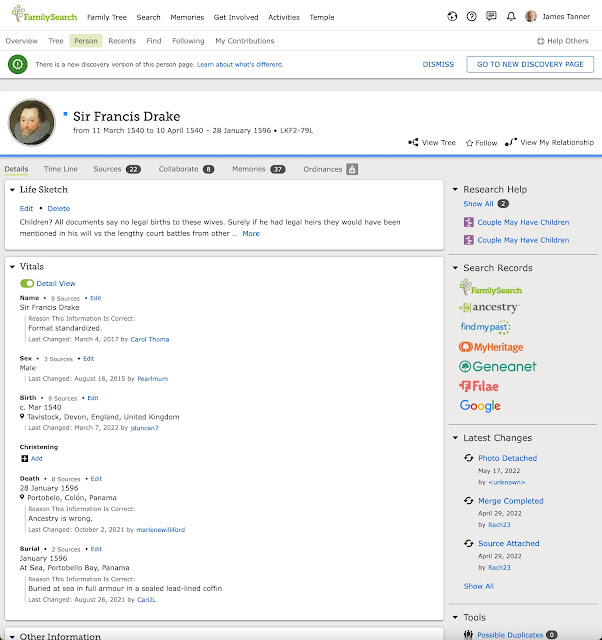 One of the major issues with the FamilySearch.org Family Tree is the fact that people can actually contribute information about nearly everyone who ever lived. Of course, this includes famous, infamous, and those who were totally obscure. Recently, my wife and I had an occasion to discuss Sir Francis Drake with a patron of the Family History Library. We noticed that there were a substantial number of changes being made to this one entry. However, this is the case with many entries in the Family Tree, 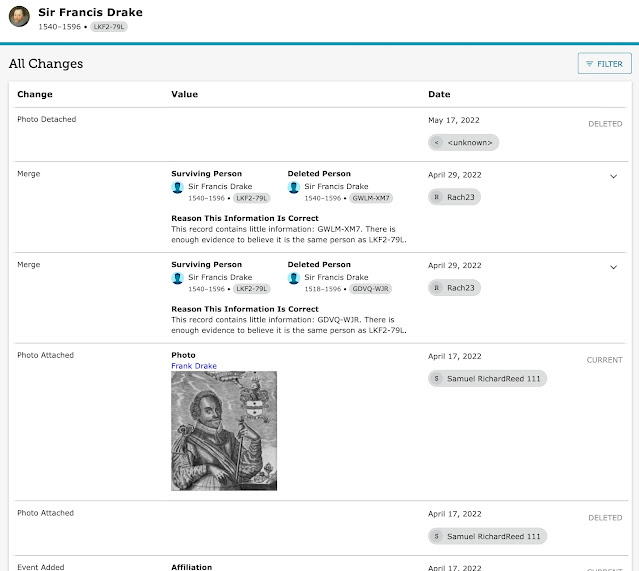 The interesting thing about Sir Francis Drake from a genealogical standpoint is that he had no documented children. So why do so many people think they need to spend their time adding and correcting information about this one person? From reviewing some of the changes, I can only surmise that these people all believe they are related to Sir Francis simply because they have the same surname. It is also abundantly apparent from looking at the Family Tree that Sir Francis Drake is not the only object of constant change.

Historians commonly believe that Sir Francis Drake was born illegitimately, See Wikipedia: Francis Drake. It is also very commonly observed that his father was a poor tenant farmer and whose Sir Francis' mother most certainly was not a member of the English nobility (as shown in the Family Tree). One source indicates that his father left England after being arraigned for assault and robbery in 1548.

In addition, the first source cited in the Family Tree also states that his father was a tenant farmer in Devon, England.

In the Family Tree, his father has been elevated to the English nobility as the son of Sir John Drake V. despite the lack of any documentary evidence showing a parent/child relationship.

There is also an article cited as a source from The Drake Exploration Society, see http://www.indrakeswake.co.uk/Society/descendants.htm. Here is a quote from that article.

The Issue of the Drakes' Descendants
Extensive research has been conducted by society member Susan Jackson on Drake's family tree. Therefore, we are prepared to assist the serious researcher in this area. However, we wish to emphasise our opposition to those claiming to be descended from Sir Francis Drake. Our view is based upon the following facts.

It is abundantly apparent that Sir Francis Drake is not the only object of constant change in the FamilySearch.org Family Tree despite the fact that his family has no living male descendants which indicates that if your name is Drake, you are not a descendant of Sir Francis.

This is only one of thousands of examples of irrational changes being made to the Family Tree every day. When will something be done to stop this huge waste of time and effort.