I never seem to run out of genealogical research tasks, but as I pointed out in the first post in this series, there are practical and real limits to extending research indefinitely. OK, now I want all you genealogists out there to fess up. How many of you show a line back to Charlemagne? Does your family group record for him list his wives and concubines and all twenty of his children? Now, back to the discussion. Since there are no European records in Arizona prior to about 1700 or so, we can safely conclude that to extend the line of anyone in Arizona, we would have to look elsewhere once we reached 1700. In fact, that conclusion would be mostly false. There are likely very few ancestral lines that can even be traced back to the 1700s, so the main question is whether or not your ancestors spoke Spanish. To illustrate that fact, I looked at the Family History Library catalog for Arizona. In going through the entries, I find almost no records dating back into the early 1800s, much less back into the 1700s. There are notable exceptions, such as Vigil's Index, 1681-1846, a general index of all the documents from the time of the Spanish and Mexican governments until the year 1846.

So what is in the Archivo General de Indias in Seville, Spain? Estimates range from 32,000,000 to 64,000,000 documents for an aggregate range of 80,000,000 pages of manuscript. Even if you had access to these records, they date back only to the 1500s. So you would run out of the records for Mexico in the 1500s. Why do I give Mexico and Spain as examples? Because the records in those countries pre-date most of those elsewhere in Europe and all of those available in the U.S. and Canada. Remember the first European settlements in North America date from the Columbus expedition in 1492. Those are some of the absolute limits of European records in North or South America. You could, of course, claim the Norse settlements in Greenland and Newfoundland in the 11th Century. But there appear to be no verifiable genealogical records from the settlements in Newfoundland. Otherwise, the oldest European inhabited spot in the Americas is Santo Domingo in the Dominican Republic, established in 1498.

The point is this, as you go back in time, the number of useful genealogical records begins to diminish. I realize that is a far less than surprising conclusion, but one that seems to escape a great many genealogists. Please remember, I am definitely not talking about trying to find your great-grandfather in the Midwest in the 1800s. I am talking about absolute limits to the information available. 80,000,000 pages may seem a very large limit, but it is a limit none-the-less. I am not ignoring the Indians who lived in North America. Actually, the Spanish Records are very helpful in doing research for Indians in the Spanish speaking world, but there are virtually no records helpful to genealogy before the Spanish conquest.

Back to the United States. The first settlements of what is now the U.S. were in Florida in the 16th Century, Pensacola was founded in 1559 but shortly destroyed and not re-established until 1698, meanwhile Saint Augustine was founded in 1565.  St. John's, Newfoundland was established in 1583. So once again, even if you were able to trace one or more of your ancestral lines back to an original immigrant from Europe, that immigrant could not have arrived before 1492.

What about records in Europe? Once again I will go to Spain. Why? Because Spanish historical documents contain a wealth of genealogical information. So how far back do the records go in Spain? Some of the earliest records we have date to the early 16th Century. Church records of individuals go back to approximately 1500. There are records from Switzerland from the late 1300s. English records go back to the 1400s is some limited areas.

Reality check. How many of you who have a line going back to the 1500s have done the original research in the old records? Or did you just copy the line from someone else? Have you ever tried to read a Church record from the 1400s?  Here is an example of the England, Norfolk Parish Register from 1589: 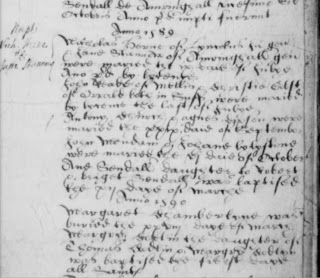 So, why do people claim lines further back? That is the question of the next post in this series.
Posted by James Tanner at 7:21 AM