One phrase of a recent comment keeps coming back to me, "Anybody (sic) educated person in medieval genealogy knows..." (Note: I need to proof read more and so do my commentators). I guess my question is who is this person who is educated in Medieval Genealogy? What does it take to push your genealogy back beyond the 1500s?

Let me be perfectly clear. Anyone can copy a line of descent from someone else, for example, assuming you can trace your genealogy back to one of the 185 or so American Colonists who are in the book,

If you can read and write, you can copy all that stuff into your own computer program. Is that research? I know of only one person, who I have yet to meet, that is actually extending lines in Medieval times in Norway. She is working closely with the the folks at FamilySearch and actually finding new people. But if you read the ProGenealogists article on Medieval British Isles Families, you will realize what a huge undertaking it is to extend those lines.

First there is the language barrier. Here is a copy of a page from a parish register in the 1800s. I just took one at random from the Czech Republic, Northern Bohemia, Litoměřice Archive Church Books, 1552-1905 on FamilySearch.org: 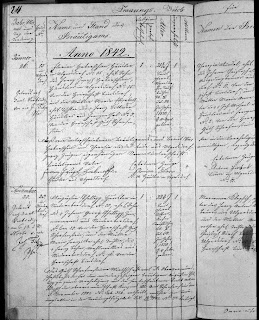 You can click on the image if you wish to see it enlarged.

I know hundreds of researchers that slog through that kind of stuff every day (or frequently). But what happens when you go back a few years? Here is the 1700s example from England, Durham Diocese, Calendar of Marriage Bonds & Allegations, 1594-1815: 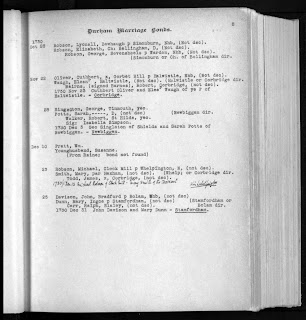 Hmm. Looks like typewriter to me. Oh well, not all of it is as hard as others. I left this in to see if you were awake. Let's go back another hundred years or so to the 1600s. How about the Austria, Oberösterreich, Catholic Church Records, 1581-1910? By the way, it gets harder and harder to find any images that date back that far. 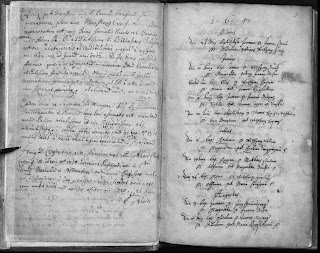 Look at the record. What do you see? Can you read the record? Can you even tell what language it is written in? Do you read old Latin mixed with old German? Let's try another hundred years to the 1500s. Here is the England, Norfolk Marriage Bonds, 1557-1915:

Look folks, we are only back to the 1500s. I suggest an educated person in Medieval genealogy probably reads this for breakfast and moves on to more difficult stuff in the afternoon. When was the last time you brushed up on your old Church Slavic or old Norse? Can I find an example from the 1400s? How about Switzerland, Basel City Church Books, 1380-1917, Sankt Theodor, Evangelisch Reformiert, Taufen 1490-1503? 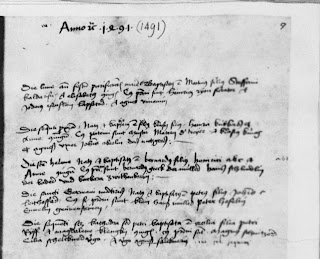 Not only do we have the language barrier, but also the handwriting. This example is beautiful and clear. Not all of the old records are in such great shape. I am talking about the limits of genealogy, not the brick walls. How long would you spend learning what you need to know to read these records? I thought I might go back another hundred years looking for genealogical records but that gets almost impossible to find an example.

You might want to read Jones, William Jervis. German Kinship Terms, (750-1500): Documentation and Analysis. New York: W. de Gruyter, 1990. It is online in Google Books. But if you are educated in Medieval genealogy, you have probably already have the book in your library. But here we go with a 14th Century manuscript, this one happens to be a musical score: 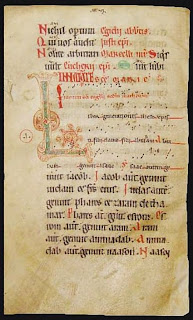 On to the next in the series, where I might be a little more serious about the subject.
Posted by James Tanner at 8:09 AM