A Matter of Place

I receive some really interesting and thought provoking comments. Occasionally, any response would be too long for a comment. This was one of those comments.


Perhaps people use the today's names of cities or towns is because genealogy source information is often filed under the current names of the towns. I am doing a review of which Shackfords were where in the 1790 census and every single source document seems to index people as being in the state of Maine even though Maine was not a separate state until 1820. If I want to do further research for these individuals in this time frame, I need to look under Maine for wills, probate records, and town documents even though these individuals were living in the Commonwealth of Massachusetts. Also, if I want to use the tools in my database where I keep track of the individuals to plot the location of where they lived, I need to use today's location. Just because people use today's locations for birth or residence doesn't mean they don't know that the location was different back then - it may mean that they want to maximize their opportunity to find more source data about the individuals they are researching.

The context of the comment was a reference I made to the need to cite the place name of the place at the time the event occurred. I think it is likely correct that genealogy information is "filed" under the name of the place as it exists today. From my view point, I would consider this practice to be based on a lack of perspective as to the need to preserve the historical designations of the places. Why do we preserve the historical designations? The reason is slightly complicated. Let me explain the reasoning by posing a hypothetical situation.

Let's suppose that you are researching in a place such as Pennsylvania in the late 1700s. In 1776, The area we now call the State of Pennsylvania was not well defined and had only 12 counties. Here is a screenshot of the county boundaries, in black, with the present-day outline of the state and modern counties in white from the Newberry Atlas of Historical County Boundaries. 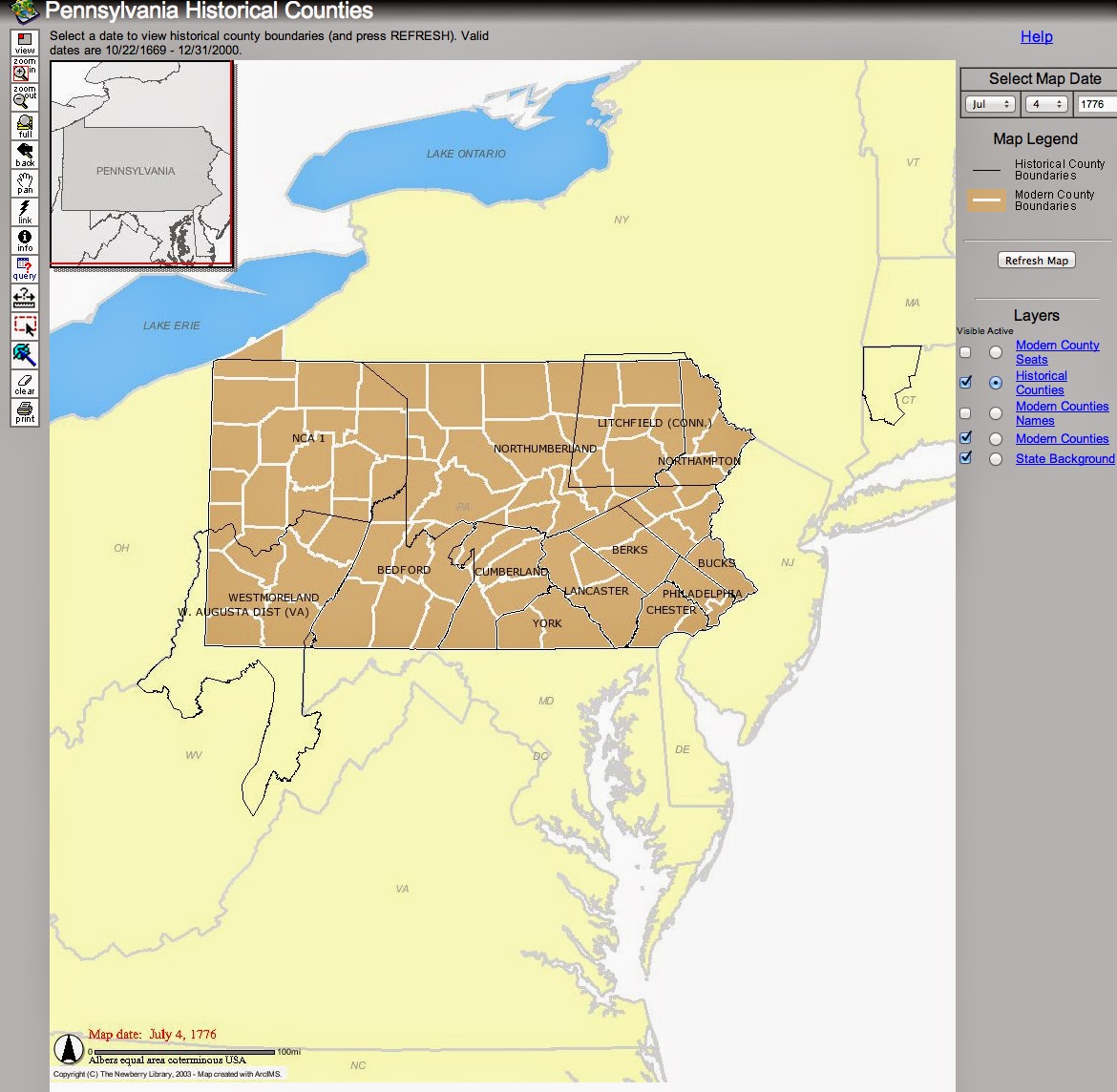 You can immediately see that if an event occurred in Northumberland or Westmoreland counties, without a more specific locations, finding the records in today's record repositories would be a real challenge. Over the years as new counties were formed, four things could have happened to the records:


So where do you start to look? It is also entirely possible that the existence of the records, if they still exist, is entirely unknown to the present-day custodians of those records. This may seem a little retro, but I am talking here about the actual physical records, not their digital analogs. Now let's suppose that the records have now ended up in the State Archives and are digitized by a large online genealogy database. How do think that the records will be classified? Will you look under Pennsylvania generally or in the specific county existing today or in the area covered by the historical county? Any guess at answering this question would be pure speculation.

So why do we need to record the original location? Shouldn't we just stick in the name of the current county and state (or country or whatever) and forget the whole problem? Now the answer gets really complicated. The suggestion made above is one way to approach the problem. That is, record the names of both the original location and the name of the present jurisdictional location. In practice, finding the records is one of the major objectives and goals of genealogical research. Most genealogists think they are looking for names when they should really be looking for records before they even begin to look for names and before they look for records, they should locate events in their ancestors' lives.

Too many times, inexperienced researchers conclude that they have searched everywhere for their ancestors when, in fact, they have searched in all the wrong places. Looking at the map above, which could be Eastern Europe or anywhere else in the world, where did the record from Westmoreland County created in 1776 end up? Answer that question after you have definitely located the exact spot of an event in your ancestor's life and you can begin the process of searching for records. Generally searching Pennsylvania records or Westmoreland County records might be helpful, but not focused and not very effective. Searching only the records online is like wearing a blindfold and searching for a pin on the floor. You might find it but it might take a very long time or never.

So where are the records located? Everywhere and nowhere. This is what genealogy is all about: finding records. That is why I spend so much time finding out about new places to look.
Posted by James Tanner at 6:21 AM