Locating, Surveying and Recording Cemeteries -- Part One: Locating the Cemetery

The idea for this post came from attending an IAJGS Conference presentation on Family Research in Romania's Jewish Cemeteries by Daniel Jurca. His presentation was a case study of examining and exploring the cemeteries in Romania. But I realized that there is a larger issue here: locating, surveying and recording the information in cemeteries and about cemeteries. From my own personal experience, locating a cemetery, especially one that has been long abandoned, can be a monumental task. I don't have the luxury of traveling to another country such as those in Eastern Europe, so I will have to make do with using most of my examples from here in the United States.

The location of cemeteries can seem entirely arbitrary. In extreme cases, for example while crossing the plains or at sea, the person was buried where they died, but, in most cases, cemeteries were established on a family, church or community basis. It is also common for cemeteries to be lost or moved or destroyed by further development. In some cases, all present evidence of the existence of the cemetery has disappeared so the first and sometimes the most difficult challenge is locating the cemetery.

To answer the obvious question, not all of the cemeteries are yet on FindAGrave.com, BillionGraves.com or Interment.net. But an obvious first step for locating any geographically related place is look for it online. If you do not know the name of the cemetery, however, this can be frustrating. Of course you should try searching these obvious online sources before you go tramping off through the woods. You might also try searching in the USGenWeb and in local cemetery lists that may appear online in a Google search. There is also the U.S. Department of Veterans Affairs, National Cemetery Administration, Nationwide Gravesite Locator. If you live in country other than the United States, such as the U.K., you may wish to search for your own local cemetery lists online. By the way, one large website in the U.K. is deceasedonline.com. Another resource in New Zealand is a list made by the Christchurch City Libraries, Cemeteries and Cemetery Records. There are also online lists such as the JewishGen Online Worldwide Burial Registry.

This post is not intended to be a list of all the cemetery websites online since I expect that there are hundreds, if not thousands. This post is more about the process of actually finding the cemetery on the ground. For this, you need maps and directions. Even with BillionGraves.com's geographic coordinates, finding the actual location can be a challenge. I can remember trying to find a particular location in Northern Arizona, Kerlin's Well, and even though we had the coordinates, it took us many hours to find a passible road that would lead to anyplace where we could access those coordinates.

In the same vein, you may find all sorts of impediments to accessing a cemetery, such as dogs, bulls, fences, brambles, cliffs, locked gates and high fences, etc. You will also find that not too many cemeteries yet have a way to mark where the graves actually are and seeing a list of burials is a far cry from locating a grave in a huge unmapped cemetery. In some larger cemeteries, even with a map from the sexton, you may not be able to locate the grave because of bushes, trees or simply the confusion of the area where the grave is located.

As for locating the cemetery itself, this is a challenge in basic genealogical research. The location of the burial may be in an obituary, a death certificate or other document. There may be references to a family cemetery in letters, journals or other such documents. It may be necessary to travel to the area where you determine the person died and start asking around for the location of old cemeteries. Sometimes, the existence of even old abandoned cemeteries has persisted in the collective memory of the community. I once found a cemetery by asking a teenager working in the pro-shop of a country club. 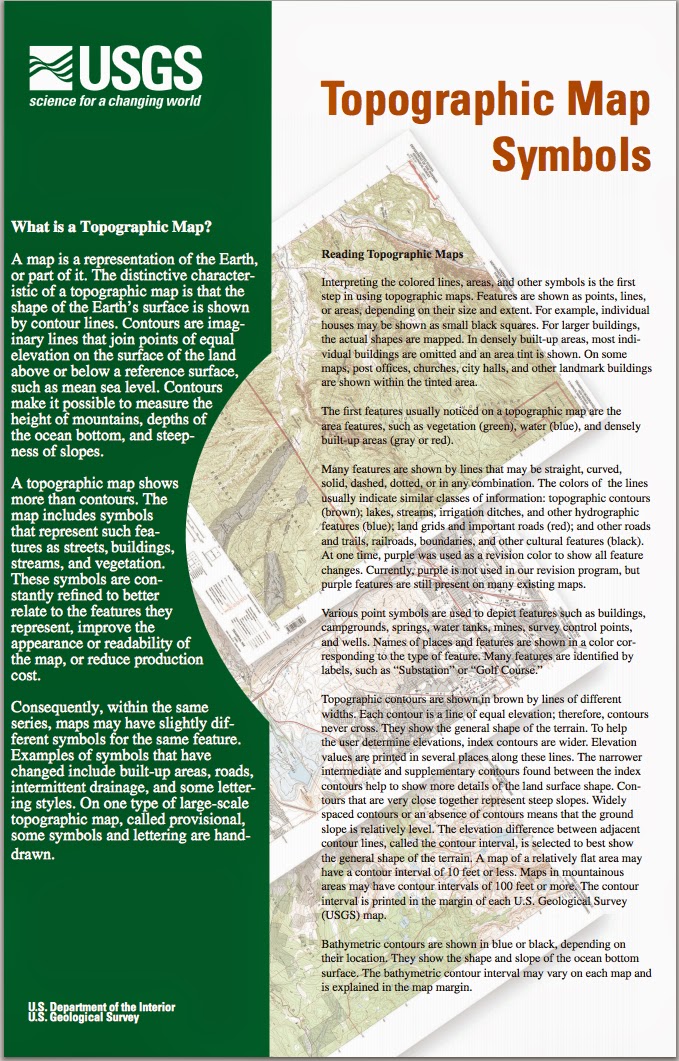 Even in this age of Google maps, we need to remember that historical maps, such as the U.S. Topographical map series, may contain valuable information thought insignificant and not carried over to modern maps. Once you have located a cemetery on a topographic map, it is always helpful to look at the area with Google's satellite view to see what is on the ground in the area today. Here is what cemeteries look like on a topographic map from the symbols list above: 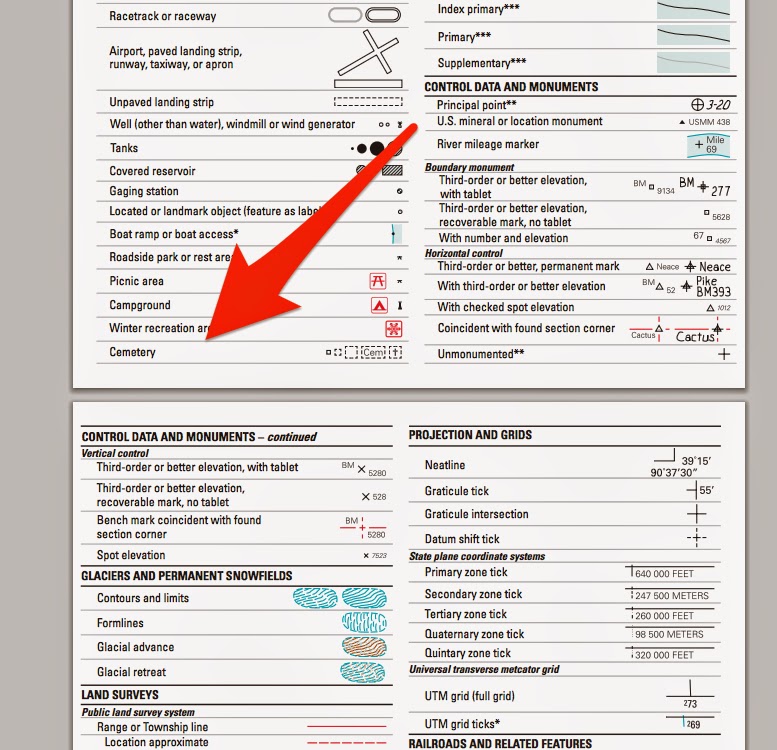 The USGS has a free online collection of historic topographical maps in The National Map: Historical Topographical Map Collection. The Collection is described as follows:

Here is a blown up view of a map of St. Johns, Arizona showing the location of the West Side Cemetery on a USGS Topographical Map. Notice that the symbol for a cemetery is not very obvious. 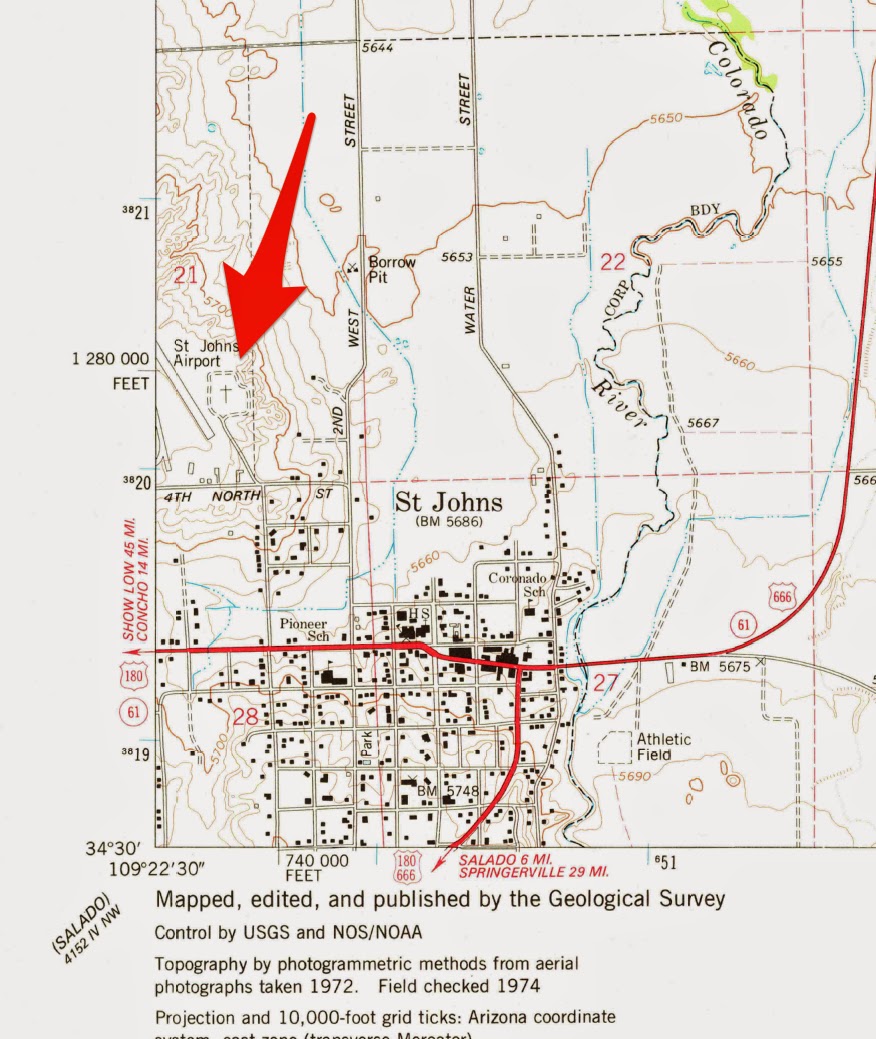 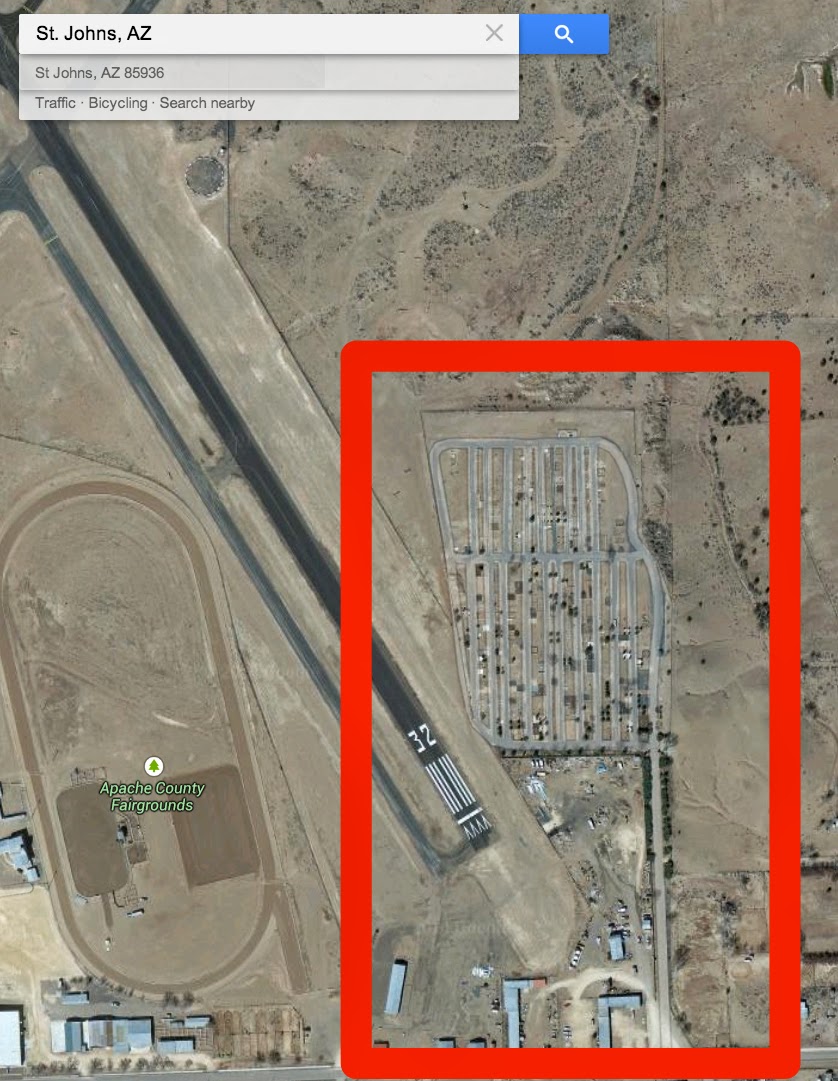 This particular cemetery is next to the airport and near the County Fair Grounds. Cemetery locations were usually not chosen to be placed on the most valuable land in the area.

Locating an old or abandoned cemetery is one of the most interesting and challenging parts of genealogy. Your adventure may begin with a diary or journal entry mentioning a burial along the trail or seeing an old cemetery marked on a map.

Just after I published this post, I found a recent post by my daughter Amy on TheAncestorFiles. It is a perfect example of the cemetery finding process. See "Finding Thankful, Joshua and Tabitha."