In my last posts in this series, I discussed two different methods of describing real property. As I have pointed out, understanding maps, plats and land descriptions is a vital link in finding and identifying where ancestors lived. (See links below). There are three main types of land description in the United States (and elsewhere):
This particular post follows up with a discussion about how to read a land survey property description. First a short review.

A land survey starts with the establishment of a point of known location and elevation. Topographical mapping involves establishing bench marks, or locations of known elevation, in order to measure and draw slope angles. Surveying is normally conducted for the purpose of establishing boundaries for buying and selling land and so the starting point of the survey may or may not also be a bench mark. In the United States, the beginning point of the United States Land Survey is a monument located on the border of the states of Ohio and Pennsylvania, on the North side of the Ohio River. See Wikipedia: Beginning Point of the U.S. Public Land Survey and the image above.

Surveying is both a science and an art and before the common use of geo-positioning technology (GPS or Global Positioning System) the accuracy of the positioning of the first survey point depended on the accuracy of other historical surveys and the degree of competency of the surveyor. Over the many years I have bought, sold and litigated issues involving real property, I have frequently encountered the limits of the accuracy of surveys. Unless genealogists are also involved in legal boundary dispute issues, they will be unlikely to become aware of the degree of accuracy of the historic surveys. I might add that years ago, boundary disputes involved differences that could be measured in feet. Today, disputes can involve differences measured in inches. Some of the earliest law cases I handled involved acrimonious battles over the location of a property boundary and in some cases, the decision of the court turned out to be arbitrary and simply wrong.

From a very simplified standpoint, working from and extending from a beginning survey point, the surveyors establish both a north/south line or the Principle Meridian and an east/west line of the Base Line. In the U.S., the land is then measured out into rectangular areas containing the same acreage. The U.S. Public Land Survey System (aka PLSS) is regulated by the U.S. Department of the Interior and the Bureau of Land Management. Here is a map of the states included in the PLSS showing the main survey lines for each state.

You will note from the map that the eastern part of the United States and Texas are not included in the PLSS. You can also see that some states have more than one set of survey lines. In Arizona, where the two different surveys meet, they are off by a significant amount and the difference wrecks havoc with land descriptions near the boundary of the two systems. Conveniently and on purpose, some of the lines form the boundaries between states. Throughout the U.S. there are a number of "base line roads" that are so named because they follow a survey base line (usually approximately).

These All of these lines are established by using astral location techniques. The 24 mile sections are then further divided into four, six mile sections called Townships. 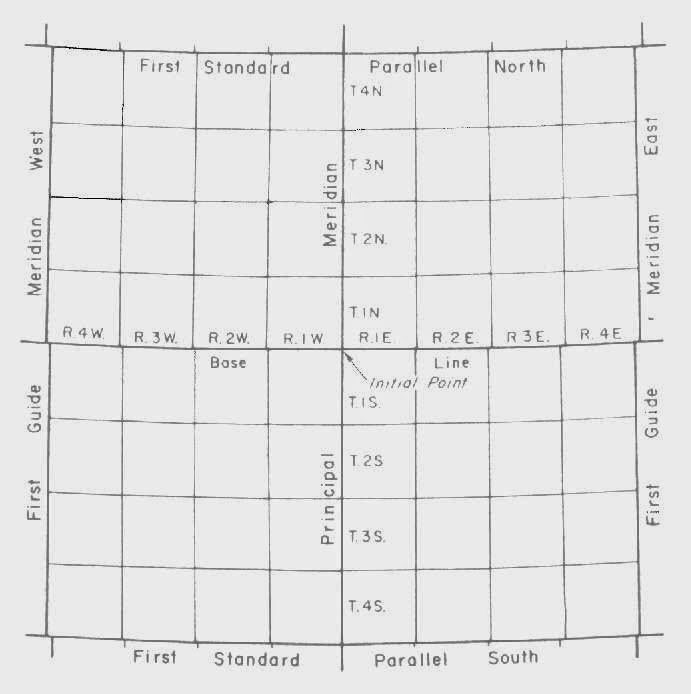 At this point the survey shows the townships or areas of 36 square miles, six miles on a side. The next step is to survey the boundaries within the townships. Here is a diagram (you can see the sequence above in the post) of what the divisions look like:
The plat is labeled "theoretical" because many townships have physical features that limit the township from having a full 36 square miles. There are also places where larger tracts of land have not been further subdivided. Each individual square is called a Section and contains one square mile, usually approximately, and are consecutively numbered in a zig-zag pattern. The image above shows a township in the middle surrounded by parts of eight other townships. So Section No. 1 in the this township is surrounded by townships, counting clockwise, 2, 35, 36, 31, 6, 7, 12, 11, and back to 2.

You would think that if the country was marked out in Sections, that all land boundaries would follow the lines and be rectangular. Unfortunately, this is not the case. People still tended to sell land according the local conditions and land features so there are many oddly shaped parcels. The Sections are further broken down into smaller units. All this may seem to be arbitrary, but as I will cover in one of the next posts in this series, there are different ways of measuring land and these surveys are supported by measurements in "chains" which can be an actual physical chain of 66 feet. In this case, an acre is actually the area of 10 square chains. It all makes sense when you know the old systems of measurement.

Here is a diagram showing the section divided into smaller areas:

If the lots end up being odd sizes, there is still the possibility that the legal for any given lot is not easily understood or found on a map. So here is a legal description of a lot according to the way the system works, see if you can plot out where it would lie in the section:

Here is another one to practice on.

Essentially, you have to take a piece of paper and draw it out. Carefully. Then you have to recite the description back as you look at what you have drawn. It helps to read the description from the right to the left and once you have it down, repeat it from left to right.

Good Luck.
Here are links to the previous posts in this series: