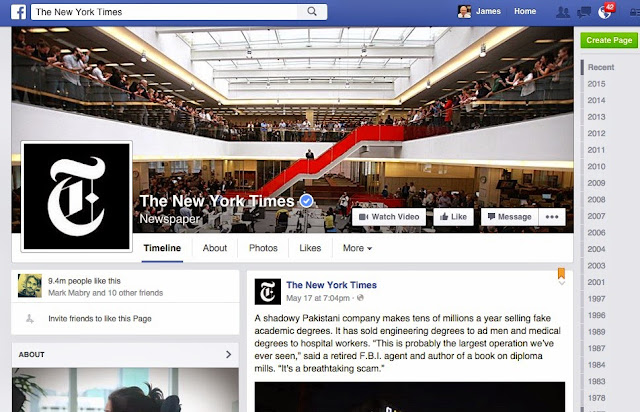 I am finally seeing some significant movement away from Facebook.com.  For some time, it has appeared as if Facebook would become like a massive black hole sucking everything into its clutches. I noticed the glimmer of escape when most of my family started using Instagram.com more than Facebook. This is not to say that my Facebook traffic has slowed down any lately, in fact the opposite is true. If anything, Facebook traffic has increased and in some cases dramatically. But change is in the wind.

A short time ago, there were a number of comments and features in the news stream about Facebook adding "real time" news. You can now subscribe to just about any TV station, newspaper or other "news" outlet and receive immediate, instantaneous news update right on your Facebook feed, for example, the New York Times Facebook page shown above. This is a less that subtile transition from a "social networking" environment to a data supplier environment. Wait, how will we know about the latest cute cat video? Never fear. Facebook isn't going anyplace, but it is expanding into areas that can only peripherally be considered to be "social networking." The distinction between the results of a search from Google and a search on Facebook are becoming less distinct.

Some time ago, I wrote about a movement I detected in the genealogical community to move from formal blogs to posts on Facebook. Several prominent genealogists have decisively moved onto the Facebook stage in a dramatic way and accumulated thousands of followers (friends etc.). Some of them are combining a major presence on Facebook with other networking outlets such as webinars or similar online broadcasts. One of the most successful of these Facebook genealogy outlets is Tracing the Tribe, Jewish Genealogy, moderated by Schelly Talalay Dardashti with over 7,600 members. Shelly is also one of the bloggers that has moved her primary emphasis away from blogging to be on Facebook. Some Facebook personalities are still trying to maintain their blogs.

There is a difference between moving to Facebook and merely posting notices of blog posts on Facebook. You might have noticed that everything I publish in my blog gets posted to a variety of social networking websites, including Facebook.com, Twitter.com and Google+. But there is a difference between having a presence on Facebook and running a Facebook dominated outlet. Blog posts are generally substantial. Most Facebook posts are short, concise and usually link to another item. There is not a lot of introspection and analysis on Facebook (yet?). I am certainly not predicting the demise of blogs, they are here to stay, but I am noticing that there are some significant trends in the Internet dominated communications area.

One thing I have noticed in the past few weeks is a dramatic decline in the number and variety of blog posts from the genealogical community. I monitor over 300 genealogy related blogs every day. In the not-to-distant past, two or three months ago, it  was not unusual for me to have over 200 new posts almost every day. Today, for example, I have gone hours with only one new post. My guess is that blog readers are abandoning the content of blogs for the news bites on Facebook and other social networking venues.

At some point, if my own readership drops off, I guess I will have to evaluate what is happening and move to the new venue. I am already on Instagram with my family. I have yet not decided whether to go public with Instagram. I have been on Facebook for a very long time, but I am not yet ready to move completely to another format. If it matters, I have a lot to say and venues such as Facebook do not give much in the way of substance even with the addition of the news. Time will tell.
Posted by James Tanner at 9:52 AM