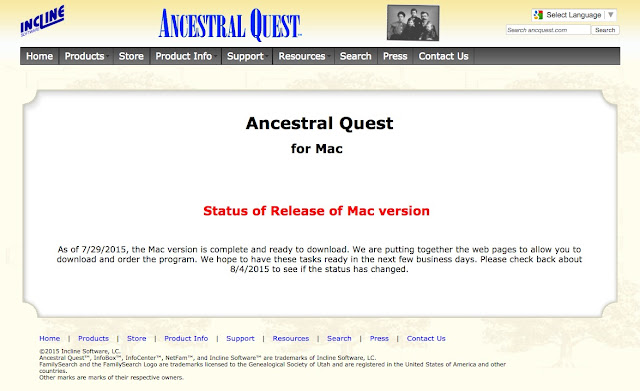 I recently had an opportunity to talk to Gaylon Findlay, the President of Incline Software, best known as the developers of the Ancestral Quest genealogy program. He showed me a brief demo of the new, Apple Macintosh version of Ancestral Quest. It is running under a customized version of CrossOver Mac, the emulation program that runs Windows software on the Apple OS X operating system computers. The Ancestral Quest Mac version is supposed to be released in the next few days. I am anxious to get a copy and will report on the full program as soon as I have had time to evaluate it.

What I did see was impressive. Ancestral Quest always receives some of the best reviews on the GenSoftReviews.com website.
Posted by James Tanner at 7:20 AM