To Index or Not to Index. That is the Question

I am not really challenging the concept of providing an index for genealogical research. Indexes do have their place. But I am suggesting that researchers do not become overly dependent on indexes. Basically, indexes are derived or secondary documents and by their nature are suspect and unreliable. For example, if I consider the indexes that are the basis for searching on Ancestry.com, I find that many of the entries were originally indexed in one way and that Ancestry.com allows subsequent users to "correct" the indexed information and add addition readings. Here is an example: 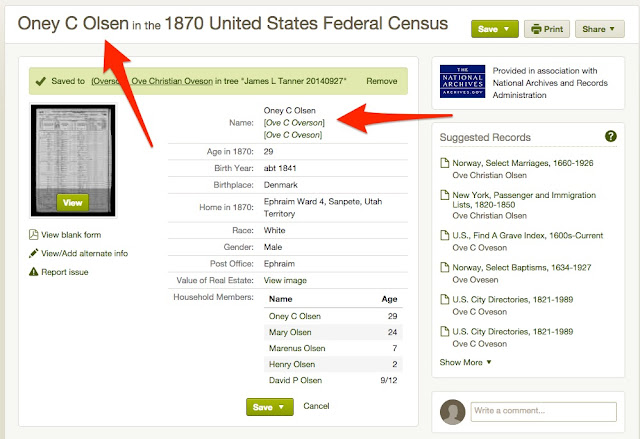 There are a number of problems with this entry. In the first instance, the name of this person was incorrectly recorded by the U.S. Federal Census enumerator. Despite this mistake, someone found the entry and through Ancestry's correction system, added in another reading of the entry which then became part of the search. However, this particular ancestor of mine was from Denmark and had variations to the spelling of his name, so subsequently, someone added a variation. The uncertainty about the spelling or even the identity of his name has caused the search engine in Ancestry.com to find "Suggested Records" that do not belong to this individual at all. 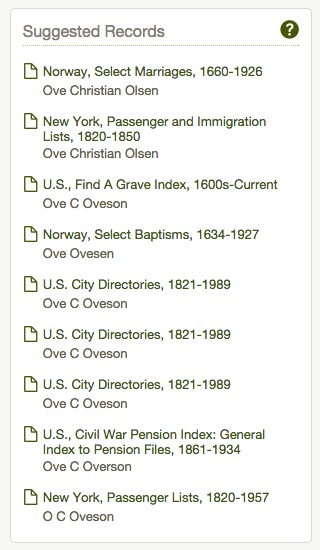 The references here to "Olsen" are not accurate because the name of the ancestor was "Oveson." It might be helpful to note that apparently Ove Christian Oveson changed his name from "Ovesen" to "Oveson" (with an "o") before he left Denmark. So his name had three variations when he finally got to the United States:


So which is "correct?" They all are.

If indexes are supposed to assist researchers in finding their ancestors, then what is going on here? How does an index entry for "Oney C Olsen" help me find my ancestor whose name was Ove Christian Oveson (Ovesen)? Here is an enlarged image of the actual 1870 Census entry: 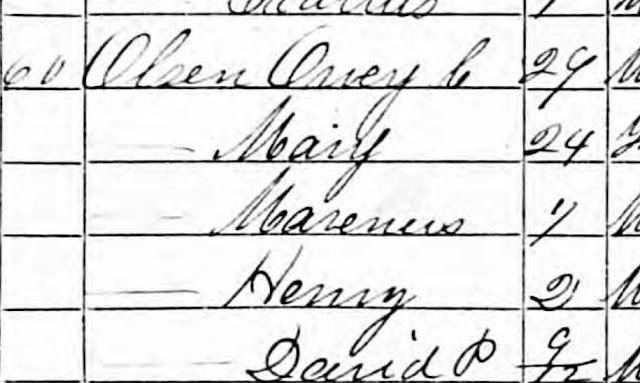 From this, it appears that the enumerator actually wrote "Ovey C Olsen." The first indexer read the "v" as an "n." But the enumerator clearly got the last name wrong. How would you have found this entry in the U.S. Census record? Would you have concluded that the entry for the Overson family was missing? It might help to know that the Henry listed here is my Great-grandfather Henry Christian Overson. Yes, "Overson." That is the way the name ended up being spelled in the United States. How much help is the index in unraveling this dilemma? It might be interesting to note that the child recorded as "Marenus" is also a Great-grandfather whose name is Marinus Christensen and who was either Mary Overson's brother or son, depending on who you believe. Given the information in this Census record, could you find Marinus Christensen in the 1870 U.S. Federal Census, index or no index? The only reason this particular entry is useful at all is because someone took the time to ignore the index.

This example dramatically demonstrates the following issues with reliance on indexed entries:
No amount of searching with an index will untangle this situation.

This is not a criticism of any one index or indexing method, but it does point out the need for the indexes that are active and ongoing to provide a way, such as the way provided by Ancestry.com, for subsequent researchers to add an additional gloss to the index or even several variations on the names.

This issue also points out a valuable lesson, competent researchers will not rely on indexes. They may take advantage of them as finding aids, but whenever possible, they will find the original record. Sometimes, of course, there is no "original" record. The index is the record. This is true in directories and other lists. The answer with this type of document is that the name you are looking for (and any reasonably determined variations) is either in the list or it is not. It may well be, however, that the directory or other original index listing may suggest other documents that actually do exist and which can be searched for additional information.

This past week, after spending almost three hours straight with a patron at the Brigham Young University Family History Library searching parish registers from Puerto Rico, I was just getting started when we ran out time and the patron was ready to drop any way. Yes, research is time consuming and yes, it does require methodical, line-by-line searching. The tragedy is that many researchers never move beyond the index. They conclude that their ancestor "is not in the record" and move on to another index.

Before leaving this subject (to which I may return), I must also point out that the portion of the record that is indexed is sometimes not sufficient to completely identify an individual who has a very common name. Here is an example of what is being indexed on FamilySearch.org using the same entry for the 1870 U.S. Federal Census. By the way, as another note, this family lived in a very small town in Central Utah and it is a very simple task to search the census record for the entire town. 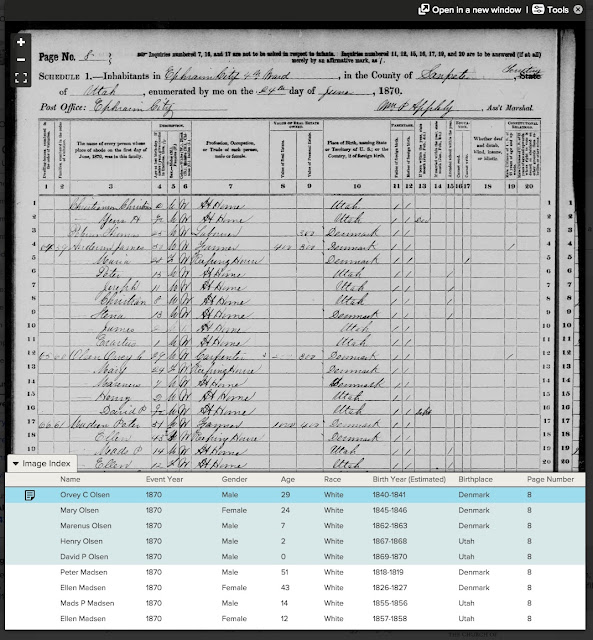 You can see from the summary of the index, now conveniently provided by FamilySearch.org, that this indexing effort extracted the name as "Orvey C Olsen" instead of "Ove Ovesen." But my point here is that there is no way to correct the problem. Next, much of the information from this census record is not extracted into the index. The problem this causes is that inexperienced researchers then ignore the unindexed information. Here is the entry they look at and stop at. 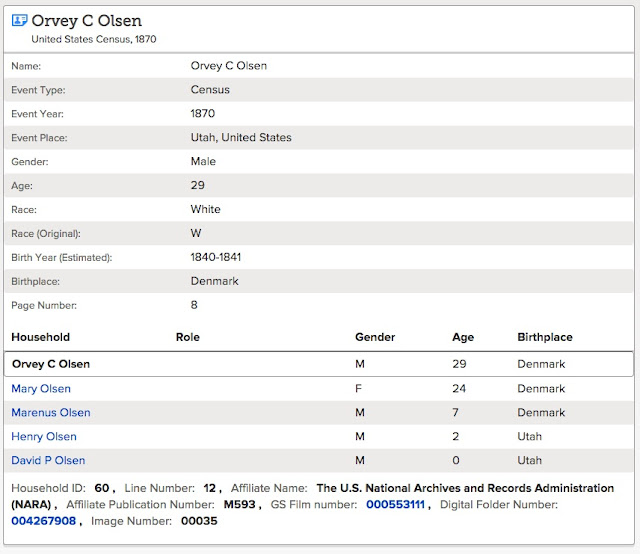 How many researchers go beyond this "convenient" summary and actually study the original record? From my experience, I would guess very few. Most will simply attach the document to their person in the Family Tree and move on to the next document or ancestor thus losing any insights into additional records that may be available about this family. They have a name, so it is obvious that the task of doing family history is now over.

It might be fair to note that there is no way this original census document could have been indexed accurately. The indexer is not a relative of the person listed and has no motivation or even inclination to question was written by the enumerator.

Does this mean that I have to examine every record for myself and ignore indexes? Not at all. If you find your ancestor by using an index, count it as a benefit. But if your ancestor is missing from an index to a record that he or she should have appeared in, do not discount the need to examine the original record carefully for an indexing error or omission. Additionally, examine the original, even when indexed correctly, for additional information not contained in the summary from the index.