I have been teaching quite a few classes lately on this subject and so I thought it would be a good idea to put it in writing. Actually, I have also been writing about this same subject for some time, but it is probably a good idea to put it all in writing instead of piecemeal around in various posts. This post may turn out to be a series depending on whether or not I can explain what takes more than an hour of class to explain.

To begin, I need to review a brief history of genealogical methodology. For several hundred years, there have also been "professional" genealogists. These people, mainly interested in history and their own survival, very early worked for royalty compiling kinship and descent books to support claims to legitimacy of those in power. These early family historians were also involved in heraldry, the practice of creating images (standards) to identify royalty. Some of these compiled lineages date back thousands of years.

The original motivation for individuals to get involved with genealogy was to "prove" a familial relationship with royalty. In the United States, researching family history got a boost in the 1800s with claims to heirship in Great Britain and elsewhere. The idea was to prove a relationship and share in an unclaimed estate. The idea that someone might have an unknown relationship to a person who died leaving a large estate without heirs resulted in many entrepreneurs establishing heir location businesses. This activity still exists today. As an attorney, I used to get regular advertisements from currently operating heir location services.

In about the mid-1800s there were the beginnings of interest in investigating individual genealogies simply for the purpose of establishing family relationships. This interest resulted in loose family organizations and the establishment of genealogical societies. The first such society in America, was the New England Historic Genealogical Society founded in 1845.  This society is still in existence and has the AmericanAncestors.org website. Another early society, the Genealogy Society of Utah was founded in 1894. It successor organization is known as FamilySearch and maintains the FamilySearch.org website.

Today, genealogy is usually subject to vastly over-exaggerated claims as to its popularity. Even today, the number of professional genealogists is vanishingly small compared to almost any other interest or profession. Although there is wide participation in family history on a casual basis, the serious adherents constitute only a very small number of people.

Going back to the pre-computer days, a genealogist's work consisted of following the classic "Research Cycle" of beginning to accumulate family records. These records most commonly consisted of Bible records, letters, photos, assorted documents such as marriage records, death records and perhaps some military records. This genealogist usually became known as the "family historian" and could recite what had been preserved of the family's oral history. These records were maintained in boxes or scrapbooks or albums and trotted out for display at family gatherings or when another individual family member showed any interest. In some cultures this person would have the status of the official record keeper. Many of today's older genealogists got their start from association with this family record keeper.

Early in the 1900s, genealogy began to be systemized. One of the earliest such efforts, that I have been able to locate, is the Genealogical Society of Utah's Lessons in Genealogy published in 1915. 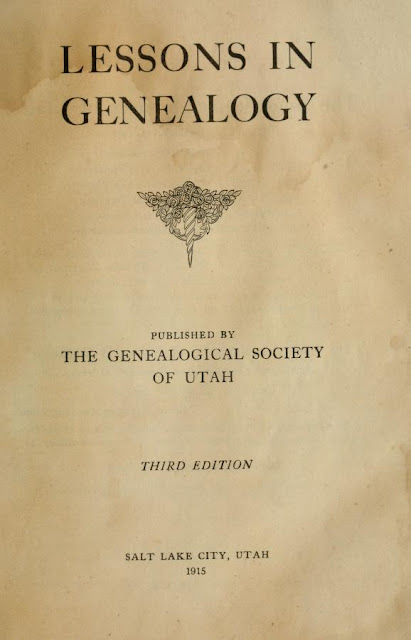 This is the third edition but I have not seen a copy of any of the earlier editions. This lesson book advocated a structured approach to gathering and preserving family history. Quoting from page 17:


We shall assume that the reader is entirely unacquainted with the methods employed by trained specialists in this art ; and that he desires full and careful directions as to how to begin and how to continue his labor. His first requisite is notebooks, record books, pencils, paper, and ink.

The Lesson Book goes on to urge the readers to the following actions:


The notebooks should be preferably about seven by ten inches, as this permits space for dates and names across the page. The Genealogical Society has had prepared properly ruled and printed notebooks for this purpose. They may be obtained from the Society at 10 cents each. The book for a family record of temple work may be purchased at the Genealogical Society office, which keeps the approved form, bound in one, two, and three quire sizes. The prices are: One quire, $1.25; two quires, $1.75; and three quires, $2.25. A soft and good pencil is advisable, as there are often erasures to make, especially with beginners. The pencil should have a rubber.

Genealogical research and recording was pretty much exactly the same when I began back in the 1980s. The forms had changed, but the process of recording genealogical data on a paper form was almost exactly the same. Going back to the Lesson Book, we find the following statement also on page 17:


To go into a genealogical library, or into churches, cemeteries, recorders offices, or state depositories, to search deeds, wills, and other papers of identification and thus to weave a perfect chain of ancestry work for several hundred years constitutes a business of no small proportions ; and the ability to take that genealogical data and to record it first in proper note books, then to transcribe it into record books for temple work is another business in and of itself. But surely the Latter-day Saints should acquire this knowledge and become proficient in this business. For it is their business, above all the peoples of this earth. For this reason, we have undertaken to furnish these lessons, which we hope will enable a student to acquire sufficient skill to do this work.

Despite the obvious religious overtone, this is a pretty good summary of what genealogists did until quite recently. With the introduction of computers, most genealogists kept following exactly the same procedures they had learned from these early efforts in the late 1800s and early 1900s. The only difference was that some of the record keeping portion of the work moved from paper to the computer disks.

If I were to talk to any one of the hundreds (thousands) of genealogists I have met over the past thirty years or so, I would find that almost all of them are still mired in the original methodology. If they use computers, the computer is no more than a mechanical substitute for paper and pencil. Some indications of this stagnation include the recurring questions about how to print out all the information accumulated online and questions about how to print a book about an ancestor or family line.

Typewriters began the transition from the ancient methodology to a newer one. But I still see handwritten family group records and pedigree charts. Many people still say they have to write out things by hand to visualize the relationships. We are in a transitionary period and older genealogists are still resisting the changes that have come very rapidly in the last twenty or so years.

This brings us to the combination of computers with the Internet. Here I am writing away during my visit to Mesa, Arizona and those few who read these posts will see this writing almost instantly around the entire world. The impact of this technology is just now reaching global proportions. By their nature, genealogists are generally older and less susceptible to changes; technological or otherwise.

Of course, records have been accumulated, for a variety of reasons, in libraries and archives for thousands of years. Access to these records was limited to those people who were allowed to study them and even more importantly, those who were able to travel to see the records. A cottage industry grew up in the genealogical community of record searchers, people who would go to a large library or other repository and look for records. This still exists today. In fact, we have a newer version of the cottage industry appearing online with cooperative search websites such as AncestorCloud.com.

Many traditional genealogists take comfort in focusing on the number of records in the world that are still locked up in paper copies. They justify their reticence to shift to the new methodology by claiming that "not all the needed records have been digitized." Yep, they are right. But what is more important is the fact that billions of the genealogically significant records have been digitized and the traditionalist has no way of knowing what has and what has not been made available online.

As I continue this discussion, I am not going to focus on the "professional" aspects of genealogy. As I mentioned earlier in this post, they make up an insignificant minority of the number of those people who are involved casually in accumulating family history. My focus is on the person who is just now beginning to have an interest in family history. The rapid changes in technology have a much greater influence on the beginner than they do on the traditionalist. In fact, the traditionalists, professional or otherwise, are being pushed into the backwater of genealogy.

This brings me to the radical changes in methodology that have evolved over the past ten or so years and have only become workable in the past five years. The change dates from the significant introduction of the MyHeritage.com Record Match technology and its secondary technology that goes by the name of Record Detective. Of course, this technology would not have developed without the huge changes that come with the entire technological computer revolution. This is often referred to as the dawn of the Information Age and genealogists are being dragged into the Information Age whether they like it or not.

Well, it looks like to me that I will have to make this into a series. You will have to excuse my brief absence while I travel back to Provo, Utah, and I do have more to write about on this and other subjects.
Posted by James Tanner at 7:37 AM