Google Books wins latest round of Fair Use Fight 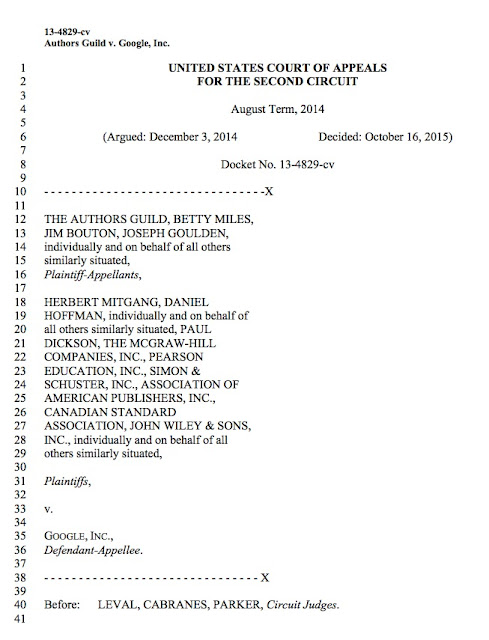 One of the big issues of our times is the conflict between the archaic and convoluted copyright laws and the drive to digitize books and records online. One of the more visible conflicts is the ongoing lawsuit between The Authors Guild et al. and Google, Inc. The most recent ruling of the court comes from the United States Court of Appeals for the Second Circuit. See the cover sheet above. The essence of the case is outlined by the Court in its introductory remarks.


This copyright dispute tests the boundaries of fair use. Plaintiffs, who are authors of published books under copyright, sued Google, Inc. (“Google”) for copyright infringement in the United States District Court for the Southern District of New York (Chin, J.). They appeal from the grant of summary judgment in Google’s favor. Through its Library Project and its Google Books project, acting without permission of rights holders, Google has made digital copies of tens of millions of books, including Plaintiffs’, that were submitted to it for that purpose by major libraries. Google has scanned the digital copies and established a publicly available search function. An Internet user can use this function to search without charge to determine whether the book contains a specified word or term and also see “snippets” of text containing the searched-for terms. In addition, Google has allowed the participating libraries to download and retain digital copies of the books they submit, under agreements which commit the libraries not to use their digital copies in violation of the copyright laws. These activities of Google are alleged to constitute infringement of Plaintiffs’ copyrights. Plaintiffs sought injunctive and declaratory relief as well as damages.

It is a fact of our modern world that millions of paper books have been digitized into various electronic formats. The availability of relatively inexpensive tablet computers has revolutionized the way books are sold, delivered and read. Google has been at the forefront of the digitization effort. The great divide in online availability is between records and books still subject to copyright claims and those where the copyright has expired for some reason or been relinquished.

Genealogists are totally immersed in this issue since many of the records used for research are also being digitized and those genealogists doing online research are continually faced with copyright issues. For example, there has been a recent issue with records that have been made available on a website and then seem to disappear without any explanation. Some of these disappearances are due to unresolved copyright or "ownership" issues. There is also a background issue of the availability of documents that are still available only in copyrighted formats.

The issue arises, in part, due to the practical elimination of copyright time limits. Current law allows coverage for newly created works for over 100 years into the future, long past the lifetime of any author or anyone currently alive. See Copyright Term and the Public Domain in the United States.

The conflict with Google arises primarily through a claim by the authors of books that the digitization effort by Google and its presentation of a "preview" of a copyrighted work is in violation of what is called the "doctrine of fair use." Consistently, so far, the courts have ruled in Google's favor on this issue, but the Plaintiffs listed above in the caption to the most recent decision, maintain that they will seek Supreme Court review.

The effect of a ruling in favor of the Plaintiffs (the authors) would be unimaginable. All sorts of issues could then be raised about the extent of fair use. For genealogists, it would include the ability to copy portions of a book or other record for use in research and posting on publicly available websites. An ultimate win by Google would not eliminate the issue completely, but it might serve as a deterrent to further restrictions. It is possible, of course, that the Plaintiffs or others would seek to make the copyright law as it is written by the U.S. Legislature even more restrictive.

This is an area of the law that closely impacts what genealogists do from day to day in researching books and records and bears watching. Let's see if the decision is appealed to the Supreme Court or not.
Posted by James Tanner at 6:25 AM