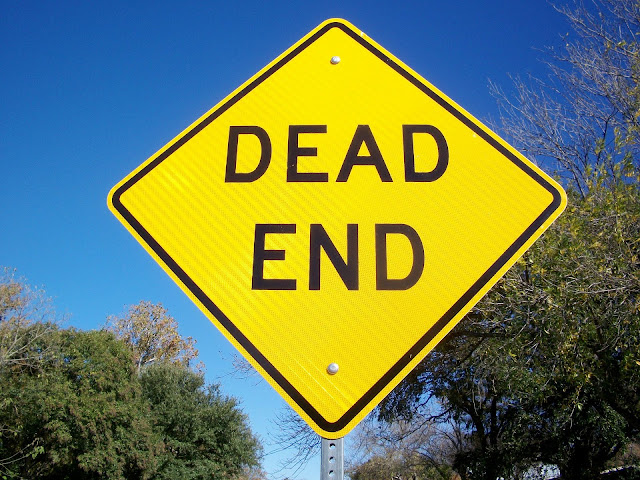 I received the following comment from a reader from a post I did more than a year ago:


I refuse to give my my ancient copy of PAF. If you can find the source files, it can be loaded onto any PC and run successfully. I simply copied my files from an old hard drive wthat was no longer in use, and it ran on my windows 10 computer without issue.

We often talk about genealogical brick walls when we can't find a person we are looking for, but this is another more insidious problem. Dead End Genealogy occurs when a person refuses to collaborate with others and continues to use outmoded technology. Dead End Genealogy almost always results in the individual losing all of the information they have accumulated due to the death of the genealogist or to a simple loss of data. Of course, I cannot tell from this comment whether or not the person who is still trying to use Personal Ancestral File has some other venue for compiling genealogical data, but the fact that the comment involves a program that was discontinued raises some serious questions.

This comment prompted me to go back through some of my other older blog posts and see what was actually going on. Here is one quote from a previous blog post also back in 2018.


However, the PAF issue goes much deeper than just that one program. It is symptomatic of a deeper issue with genealogists and technology. I just recently spent almost an hour with two different people trying to retrieve their logins and passwords to FamilySearch.org. You can guess that both of these people are not young. You might not realize it if you are reading this blog post, but most of the younger people I know would not even realize that desktop computer programs for genealogy even exist, much less be interested in using a program that was discontinued before they were born.

For me, PAF is the genealogical symbol the digital divide; the outward and obvious indication that a huge segment of the genealogical community is simply out of touch with technology. That is the main reason this subject comes up periodically and will continue to be a subject for comment until the program really dies.


In 1984, Personal Ancestral File, was a remarkable and innovative program for creating a personal, genealogical database. GEDCOM support was added in 1986 with version 2.0 for DOS, Apple II and CP/M. There were a number of revisions to the program. The Macintosh version was PAF 2.31 released in 1994 and was never upgraded and so ultimately stopped working on the newer Macintosh computers. The PC version of the program was upgraded from DOS to Win9x/NT in 1999. The last upgrade, to version 5.2 occurred in July of 2002.

When I looked at my calendar today, I saw that this is 2019. I have quite a few grandchildren who were not even born when Personal Ancestral File was last upgraded. At this point, I am not certain whether or not my comments about Personal Ancestral File apply to the program itself or to the Windows operating system. But I am certain that Microsoft discontinued support of Win9x/NT. Checking with the article from Wikipedia entitled Wikipedia: Windows NT I find that Windows 9x/NT was first introduced in 1993 (26 years ago if you do the math). The last version of Windows NT version 4.0 was released in 1996. Since then, there have been almost twenty updated versions of Windows culminating in Windows 10 released in 2015. I sort of looks like Microsoft may be caught in a time warp also.

Part of the motivation for writing again on this subject was that this last week I spent a considerable amount of time trying to help someone who was trying to do some genealogical work on an old computer running Windows Vista which only lasted from 2007 until about 2009. How long will the old DOS-based software continue to run on Windows computers? It looks like it might still be a long time. But does this mean that the old PAF program should continue its Zombie run in the genealogical community? How long will it be before I never have to hear about this program again or offer support to people who are running an operating system that gets constant errors about online programs that will not run on their machine? Here is my conclusion from a post in 2016.


The program will continue to haunt us as long as there are people who do not recognize that the continued use of PAF is a problem not a solution to any problem.

If you find an old PAF file and if you can find a way to read the floppy disk or CD, do not decide you need to upload the program to one of the online family trees. We have enough of that old stuff already. If you still think that the information is valuable, go online to the FamilySearch.org Family Tree and start looking to see if everything in your old PAF file is already on the Family Tree. My experience is that almost everything on old PAF disks has long since been added to the Family Tree.
Posted by James Tanner at 6:11 AM