Where is the United Kingdom? More about standardized place names

By the way, the above map is both inaccurate and misleading. This is a sort-of series about standardization for place names. What I mean by a "sort-of series" is that I have no intention of maintaining a series of articles that specifically relate to each other. this sort-of series is more eclectic and less focused.

In my first post on the subject, I brought up the issue of the use of British Colonial America, a designation for early European colonies in America that seems to be gaining popularity as a location used in the FamilySearch.org Family Tree. The Family Tree is the only large online consolidated or unified family tree that specifically suggests a wide variety of place names as "standard." Most recently the Family Tree has also incorporated time-specific entries to enhance the places. Here is an example of a suggested place name: 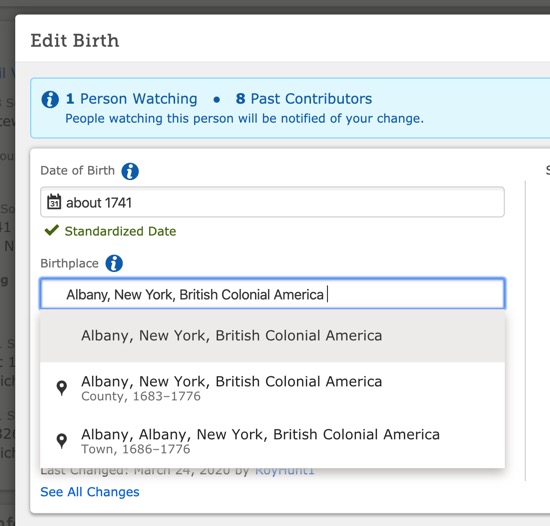 Let's assume that this person was actually born in the geographic location known as Albany, New York. Here is a Google Maps screenshot showing where this place is currently located. 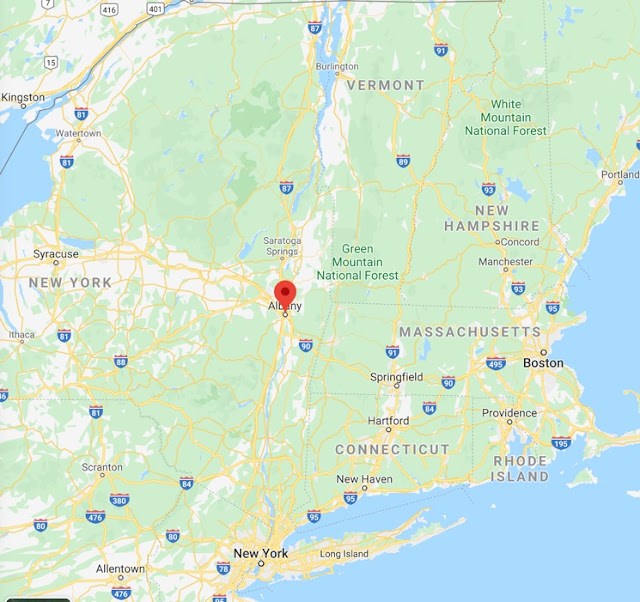 Here is a quote from Wikipedia to get us started learning about Albany, New York.


Albany is one of the oldest surviving European settlements from the original thirteen colonies and the longest continuously chartered city in the United States.

OK, now it gets complicated. I am going to summarize this city's very long history. The location of the city was first claimed by Henry Hudson, the English explorer, for the Dutch East India Company in about 1609. The land was claimed for the United Netherlands. Of course, the European explorers ignored any land claims made by the original inhabitants. In 1614, Hendrick Christiaensen built Fort Nassau, a fur-trading post and the first documented European structure in present-day Albany.

You might notice that so far, the dates haven't quite made it up those on the Family Tree. More history passed and Fort Nassau became Fort Orange. I am wondering is there were any babies born in either fort? In 1652, the forts were incorporated into a village named Beverwijck (Beaverwick).

Hmm. The name of the place was changed from Beverwijck to Albany when the English captured New Netherland. In 1673, the Dutch regained the city and renamed it Willemstadt. However, the English took it back in 1674 and here is a further quote from the Wikipedia article about Albany, New York.


On November 1, 1683, the Province of New York was split into counties, with Albany County being the largest. At that time the county included all of present New York State north of Dutchess and Ulster Counties in addition to present-day Bennington County, Vermont, theoretically stretching west to the Pacific Ocean; Albany became the county seat. Albany was formally chartered as a municipality by provincial Governor Thomas Dongan on July 22, 1686. The Dongan Charter was virtually identical in content to the charter awarded to the city of New York three months earlier. Dongan created Albany as a strip of land 1 mile (1.6 km) wide and 16 miles (26 km) long. Over the years Albany would lose much of the land to the west and annex land to the north and south. At this point, Albany had a population of about 500 people.

So, it would appear that the two dates shown above from the Family Tree standardized selection are really for two different entities: Albany County and Albany city as a part of Albany County. How much of this history is pertinent to your genealogical research and how accurate do you have to be to adequately indicate where and when the events in your ancestors' past are documented?

By the way, where or what is British Colonial America? The term was not entirely made up by FamilySearch. Here is a link to a reference to a "Timeline: British colonial America." But is the name a specific geographic location or an expedient? Why do we ignore the earlier Dutch colony? Let's look at another standardized place name list from the Family Tree. 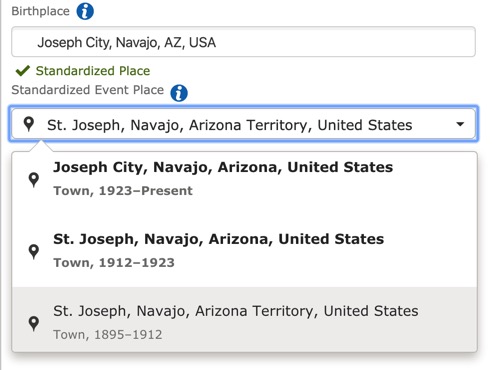 I didn't just choose this example randomly. The European occupation of what is now Arizona began in 1539 with the arrival of the Spanish Priest Marcos de Niza. The European settlement of the state began in around 1700 and the city of Tucson was established in 1775. So where is Spanish Colonial America? There are what were originally Spanish settlements in both what is now Arizona and New Mexico that date back into the 1700s. By the way, the first English speaking settlers in St. Joseph/Joseph City arrived in 1876 when the location was in Yavapai County. The settlers lived in Yavapai County for about 19 years before Navajo County was created.

What is the point? You have to know the history of the area and do a detailed timeline. If the issue is finding records that pertain to the place your ancestors lived, there are three main factors: the jurisdictional changes, the exact geographic location of the events in your family's life, and the changes in the jurisdictions over time.


The 1707 Acts of Union declared that the kingdoms of England and Scotland were "United into One Kingdom by the Name of Great Britain". The term "United Kingdom" has occasionally been used as a description for the former kingdom of Great Britain, although its official name from 1707 to 1800 was simply "Great Britain" 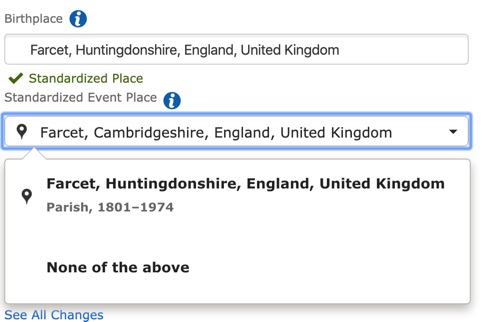 The use of the designation "United Kingdom" is similar to the use of British Colonial America. The terminology has been used but the designation refers to a concept and not a strick geographic location. Here is a further quote from the same Wikipedia article.

If you look at the standardized entry above, you will see a date of 1801. Farcet parish was established in 1851. This screenshot was taken from an entry for a person who was born in 1830, so is this designation correct?

Stay tuned, next time I will focus on whether or not it is even possible to establish standard (arbitrary) place designations.
Posted by James Tanner at 3:10 PM