A Deeper Look at Ancestry.com 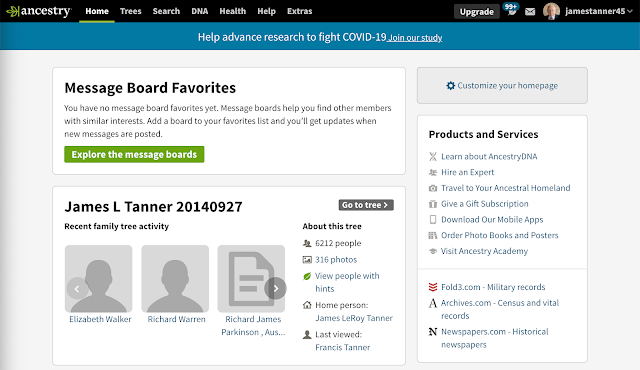 Ancestry.com began as a family history product sold on CDs in 1997 and has expanded online to include 3 million paying subscribers and 18+ million people DNA tested. The website claims the world's largest collection of family history records with over 27 billion records online.

The Ancestry.com website is uniquely valuable to research genealogists who happen to be doing research in the countries where the website has records. Superficially, anyone who was interested in their family history and who had ancestors and relatives in the countries where Ancestry.com has records will likely connect with either ancestors or relatives by creating a family tree on the website supplemented by an Ancestry DNA test. For many people in the United States and Western Europe, green leaf record hints and DNA matches will help to relatively quickly build a family tree back a number of generations. However, despite its beginning family historian orientation, the website is also extremely useful for advanced researchers.

I would like to present two examples of how this process might work to help you resolve mysteries and extend your family tree using the tools provided by the Ancestry.com website.

My first example involves solving the identity of one of my Great-grandfathers who was known as Marinus Christensen. He was born in Torslev, Hjorring, Denmark in 1863. A notation in a book authored by the wife of one of his nephews indicated that he was "adopted." Extensive research turned up another notation of adoption in a church record. However, his real status was a mystery. Off and on during my almost 40 years of research, I would check to see if there were any records that might reveal his identity. Finally, one of my daughters found a baby born out-of-wedlock very close to where Marinus lived and also named "Marinus." We guessed that this might be the long-sought record showing his actual parents and birth date.

Fairly recently, Ancentry.com introduced a new DNA program called ThruLines™. Marinus Christensen showed up with 13 of my DNA matches. Interestingly, all of these matches were Christensen and therefore his descendants. Upon noticing this fact, I checked to see if his sister had any descendant DNA matches. I found that the ThruLines™program has found 43 matches for Marinus's sister, Mary Kjerstine Christensen Overson. Interestingly, her descendants who are my DNA matches show a completely different set of matches that are all Oversons and none of them overlap as Christensens. So Marinus was not related to his "sister" and was almost certainly adopted. Obviously, the two families had different surnames because of Mary Kjersine's marriage, but they always considered themselves to be "cousins." Well, they still are cousins but not just related by DNA. This example shows how research, a family tree on Ancestry.com, and a DNA test can be used by the ThruLines™program to help resolve a family mystery.

My second example is a lot more complicated. It involves a more distant ancestor, Thomas Brownell, b. 1615, d. 1665. When I began this example, he had 39 Ancestry Hints. As I examined the hints, I found some very interesting documents. I also found a few things I would absolutely ignore. As is the case with a lot of people I have in my family tree, the information is incomplete and sometimes inaccurate. The reason for this is that in my initial survey which I started almost 40 years ago, I entered the information as I found it at that time, long before computers and the internet. Since I have been working back systematically, at the level of Thomas Brownell, my 9th great-grandfather, where I have over 2000 potential grandparents, I am only just now even looking at some of these people.

What I quickly determined was that the information I had in my Ancestry.com family tree was woefully out of date. This is an important point. Whichever of the many genealogy programs you use for your main program, you have to realize that when using other family tree programs or websites, you need to make sure that they have the same information you have maintained in your primary family tree. So before I got going any further with the 39 record hints, I spent a few minutes bringing this particular person up to date. After the update, I have Thomas Brownell, b. 1608, d. 1664. Quite a change. Now to go through all the record hints and see if they make sense or change any of the updated information. With 39 record hints, this takes some time but is still valuable.

It turns out that one of my distant relatives did a huge amount of research about this particular family which saves me a lot of time. I can now save the record hints to my ancestor and may be able to work further back in time. But this one entry did not save me the time of updating my files about this person. Because of the many people using Ancestry, occasionally I receive a benefit from all the work that others have done. Look deeper and maybe you will also benefit from the work of your relatives.