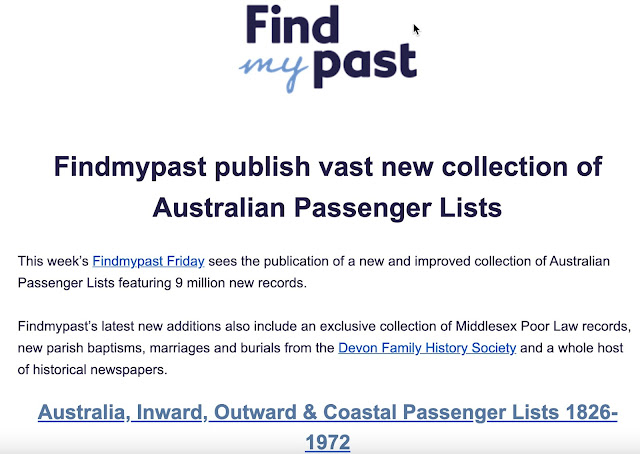 Quoting from an email announcement from Findmypast.com:

Did your ancestors travel to, from or around Australia? To help you uncover details of their voyage, Findmypast has merged their vast collection of Australian passenger lists into one simple search and added over 9 million new entries.

This growing collection now contains over 26 million of records from multiple sources covering all corners of Australia, including;

Each record includes a transcript and many also include an image of the original record. Passenger lists vary widely in size, length, and level of detail, as there was no standardised format.

Some record only a minimum of information about the passengers, while others are quite detailed. As well as revealing the dates and location of arrival and departure, many records will also reveal a variety of useful biographical details such as ages, occupations, nationalities, marital status, places of birth or residence.

I have three of my family lines that come from Australia and my ancestors were immigrants and I have been able to find some of their passenger records. These records are a great way to confirm the identity of an ancestor with a common name.

Here is an example of one of the records for my ancestor James Parkinson. 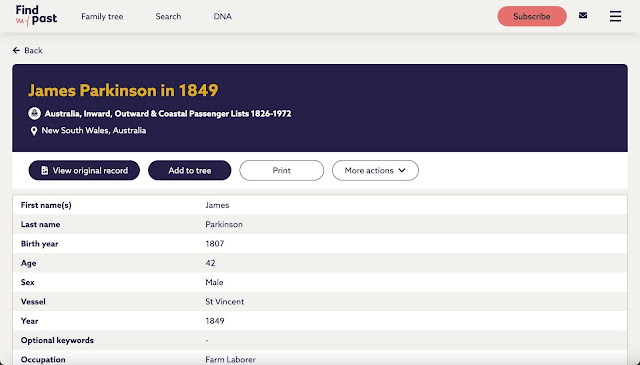 In some cases, the records may also have copies of the original record.