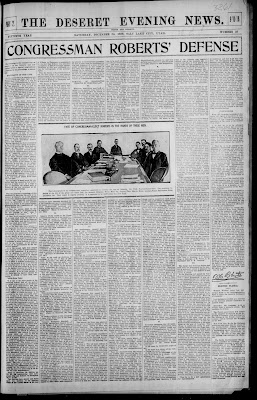 The Library of Congress in partnership with the National Digital Newspaper Program (NDNP) will create a national, digital resource of historically significant newspapers from all the states and U.S. territories published between 1836 and 1922. As quoted from their Website:

This searchable database will be permanently maintained at the Library of Congress (LC) and be freely accessible via the Internet. An accompanying national newspaper directory of bibliographic and holdings information on the website will direct users to newspaper titles available in all types of formats. LC will also digitize and contribute to the NDNP database a significant number of newspaper pages drawn from its own collections during the course of this partnership between NEH and the Library. The two agency partners launched a prototype of this digital resource, "Chronicling America: Historic American Newspapers," in March 2007.

Presently files are available only from California, District of Columbia, Florida, Kentucky, Minnesota, Nebraska, New York, Texas, Utah, and Virginia.
Posted by James Tanner at 6:50 AM