Using a digital camera for genealogical research - Part One 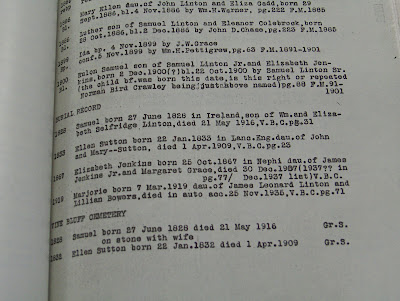 On an exploration trip to the Vine Bluff Cemetery in Nephi, Juab, Utah, looking for grave markers, we ran into some City maintenance workers. They directed us to the location of the grave markers and suggested we visit the Cemetery office in the City Office building in town. After taking pictures of all of the headstones, we drove to the City offices and found the office in charge of the cemetery. The City official was very friendly and helpful. In the course of our conversation, he mentioned that he had a copy of book compiled about City history. He said there were only two copies of the book in existence and he let us have a look at it. We immediately found reference to my ancestor's including dates, names and short histories. Fortunately, I had my digital camera and in just a few minutes I had photographed each of the pages of the book pertaining to my family. The above image is a sample of the quality of the images, without a flash, hand held and in an office with existing lighting.

Digital cameras come in a bewildering assortment of sizes and models. Even though traditional film cameras are now becoming extinct, many of the rules involved in purchasing a good quality film camera apply to digital cameras also. First and foremost is the lens system. A camera, whether film or digital is no better than its lens. If you are going to use the camera to take pictures of records, books and other documents, it is important the camera be able to focus for a close up picture. This may take some on-line investigation, but by searching for the technical notes on a particular camera, you can often tell how close the camera will focus with its standard lens. However, as the image quality, measured in megapixels, increases, the need to have a camera that focuses down to close up, at least for document reproduction, decreases.

To put it in context, the more megapixels the more detail in the image and of course, the higher the cost of the camera. Currently, and this changes regularly, cameras are being sold with up to 21 megapixel images (even more in very high priced models).

Cameras are roughly categorized into two categories, point and shoot (also called view finder cameras) and digital single lens reflex cameras. The difference is that single lens reflex cameras give you a view of almost exactly what you are shooting, right through the lens. With a view finder or point and shoot camera, if you try to take a picture up close, you run the risk of having the picture off center, due to the distance between the lens and the view finder.

Fortunately, most cameras currently available come with a primary lens that is adequate for snapshots. But I have found an appreciable difference in lens quality for closeups. Higher cost digital cameras, usually single lens reflex cameras, come with interchangeable lenses. The major manufacturers are Canon, Nikon, Olympus, Pentax and Sony. Here is a convenient buyer's guide to digital camera features.

5 things you need to know before purchasing a digital camera for genealogical research.

Comparison of point and shoot and single lens reflex cameras for genealogy.

How much should I pay for a camera for genealogy?
Posted by James Tanner at 6:00 AM