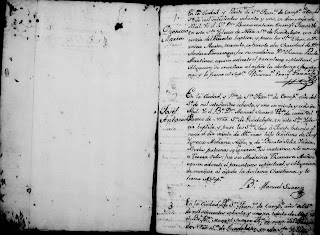 In the online world of genealogy we are being faced with a flood of indexes and extracted records. Although very useful, these indexes are finding aids, not primary source records. Two quotes from Elizabeth Shown Mills stand out in this regard. The first is attributed to T. E. Lawrence, also known as Lawrence of Arabia, he said, "All sources lie." The second is from Ms. Mills herself, "History is not just a collection of raw facts we simply look up and copy down. The past is still a little-known universe that we explore with curiosity and confusion. As we probe its depths, we appreciate resources that save us time. We crave materials we can confidently trust. Yet historical truths are rarely rooted in either shortcuts or comfort." [see Mills, Elizabeth Shown. Evidence Explained: Citing History Sources from Artifacts to Cyberspace. Baltimore, Md: Genealogical Pub. Co, 2007. Page 9]

Indexes are shortcuts, but they are not "historical truths." Too often, I see researchers opening an index, such as the Social Security Death Index and copying down the information without further investigation. They think, it is there in the index, so therefore it is true. Rather than focus on process by which the proffered information came to be recorded, they almost religiously accept the information as proven fact, just as described by Ms. Mills.

In the introduction to The Source, Robert Charles Anderson, states, "A common distinction is between primary and secondary sources. Many definitions have been given for these two terms. We will say that a primary record is one that was created in near chronological proximity to an even by someone who had reasonably close knowledge of the event. A secondary record, then, is one that was created at some remove from the event in question: it represent editorial conclusions based on primary records." [Szucs, Loretto Dennis, and Sandra Hargreaves Luebking. The Source: A Guidebook to American Genealogy. Provo, UT: Ancestry, 2006. Page1].

In what sense do all sources lie? Events occur but the record comes from memory and memory is not perfect. So in our desire to try to move closer to the actual event, where do we obtain original source material? At the beginning of this post is a downloaded copy of a parish baptismal record from the state of Campeche, Mexico comprising the first pages of the Catholic Church records beginning in 1638 at the Church of Nuestra Señora de Guadalupe. In almost all respects, this type of record qualifies as an original source since it was recorded by the Priest who performed the baptisms, usually the same day or shortly thereafter. Even this source may have errors however.

Fortunately, due to the Internet, primary source material is becoming increasingly available. For example, Arizona Birth and Death Records. The actual death and birth certificates are digitized and online. It is probably impossible to find or list all the records that are appearing online at this time, but here are a couple of examples:

The list can go on but that is another story.
Posted by James Tanner at 6:37 AM