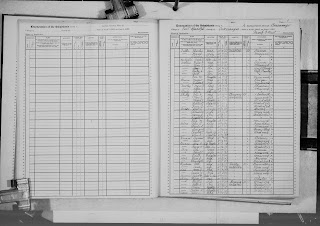 Dated 17 July 2009, but not on the Website last night on the 17th when I looked, FamilySearch's Record Search Pilot announced two new collections; the 1905 New York State Census complete with images only and the England Cheshire Non-conformist records from 1671 to 1900 indexed but with no images. Delaware State Birth Records from 1861 to 1908 are now 49% complete. Massachusetts Death Records from 1841 to 1915 are 58% complete.

These images and indexes are free and of high quality. Some of the information has either not been previously available or was only available through subscription sites. The New York State Census for 1905 contains the following information: