Brickwall? Not until you've tried the New York Public Library 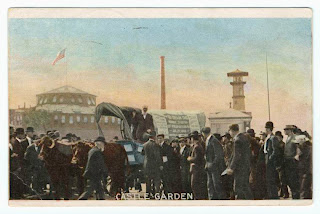 Regularly I hear the complaint that someone has hit a brickwall in finding an ancestor. Usually, when I question them about where they have searched, we find that there are a lot of places they never thought to look. One of those places is the New York Public Library.

The New York Public Library ranks right up there with the British Library, the Library of Congress and the Bibliothèque Nationale de France. In addition, the NYPL has one of the largest genealogical collections in the World. It is literally amazing the variety of documents, books and manuscripts in its eighteen locations. Its list of online services is really impressive and includes 74 searchable full-text databases of such sources as theAncestry Library Edition, HeritageQuest Online, ProQuest Historical Newspapers: New York Times (1851-2003), Chicago Defender (1905-1975), Chicago Tribune (1849-1985), Los Angeles Times (1881-1985), Washington Post (1877-1990), and the New York Tribune (1900-1910), Early American Newspapers, 1690-1876, Times of London, 1785-1985, 19th Century Masterfile, New England Ancestors, New York County Histories Online, and Burke’s Peerage and Gentry Online, Origins Network (British and Irish Genealogy).